“If God is the creator of everything, then who created God? If you theists want us to believe that everything that exists has a cause then God needs a cause too! Who caused God? You guys are inconsistent in your beliefs, because you want to apply the law of causality to everything in the universe but are not ready to do it for God. This is itself quite a massive proof that theism is false.” 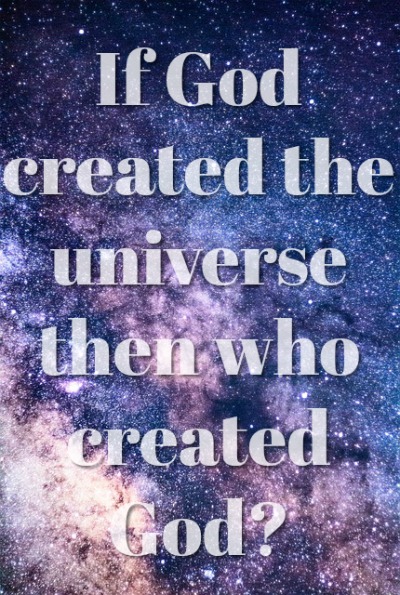 This comes up every time we use the cosmological argument to make the case for existence of God.

Not just that, even Christians who aren’t aware of the cosmological argument in its essence, try to use this “that God is the creator of everything” in their conversations with unbelievers.

Skeptics would quickly jump to their feet in jubilance, claiming victory over you by asking “who created God?” But is it certainly a dead end for us, theists? Is there no way out of this quandary? Let’s take a closer look at this.

Starting with the cosmological argument will better equip us in understanding this problem.

The most common and simplest form of the cosmological argument is stated as follows:

Since time, space and material came into existence at the beginning, this cause has to be timeless, spaceless and immaterial. The only thing that fits the bill besides God is abstract objects. But number 7 does not have any causal power and therefore we are left with God. Now this is where the skeptics have a real problem, because the moment you suggest God as the beginner of everything or the cause of everything, you will be asked “Who made God?”
So why then doesn’t God need a cause? Because the atheist’s contention misunderstands the Law of Causality. The Law of Causality does not say that everything needs a cause. It says that everything that comes to be needs a cause. God did not come to be. No one made God. He is unmade. As an eternal being, God did not have a beginning, so He didn’t need a cause. [1]

God doesn’t need a cause because God is not an event. Furthermore, the question “What or who made God?” is a pointless category fallacy, like the question “What colour is the note C?” The question “What made X?” can only be asked of x’s that are by definition, makeable. But God, if He exists at all, is a necessary being (a being which, if it exists, couldn’t be such that it did not exist; the self – existent, uncreated Creator of all else who simply exists in and of Himself, period). [2]

If God is conceived as an uncaused Being, there is no contradiction in the concept. For self-caused, caused and uncaused are logically exclusive categories; there are no other possibilities. But it would be contradictory to view God as “caused by another”, since He is the first cause and first causes have no causes before or behind them. And it is contradictory to view God as “self-caused”, for no being can be ontologically prior to itself. [3]

The other problem that we run into is that of the infinite regress. Suppose if we consider that God had a cause, then we might want to know what caused that cause. But then who caused the cause that caused God? This goes on and on and we are left with nothing but a vicious infinite regress. It doesn’t solve anything but keeps postponing the solution. This is solved only when God is the beginner or the creator.

We have seen a lot of philosophical explanations to this argument and now let us see what the Scriptures tell us about God being eternal:

Lord, you have been our dwelling place[a]
in all generations.
2 Before the mountains were brought forth,
or ever you had formed the earth and the world,
from everlasting to everlasting you are God.

3 You return man to dust
and say, “Return, O children of man!”[b]
4 For a thousand years in your sight
are but as yesterday when it is past,
or as a watch in the night.

For thus says the One who is high and lifted up,
who inhabits eternity, whose name is Holy:
“I dwell in the high and holy place,
and also with him who is of a contrite and lowly spirit,
to revive the spirit of the lowly,
and to revive the heart of the contrite.

To the King of the ages, immortal, invisible, the only God, be honor and glory forever and ever.[a] Amen.

The eternal God is your dwelling place,[a]
and underneath are the everlasting arms.[b]

There are plenty more that I could mention here but I guess these are enough to help us understand the God of Bible. Let us mediate on His words and be prepared to discuss our faith with unbelievers out of love and respect for them. Let us help them understand God is not a being who is created, but He is the everlasting, eternal, uncaused, timeless, spaceless, immaterial God and He is the one who deserves all worthy and honour.

Next: Bible Verses About Caring For Others