Is Jesus God Himself

If you have ever struggled with the question, is Jesus God or not then this is the right article for you. There are many religious groups that deny the deity of Jesus Christ such as Mormons, Jehovah Witnesses, the Black Hebrew Israelites, Unitarians, and more. 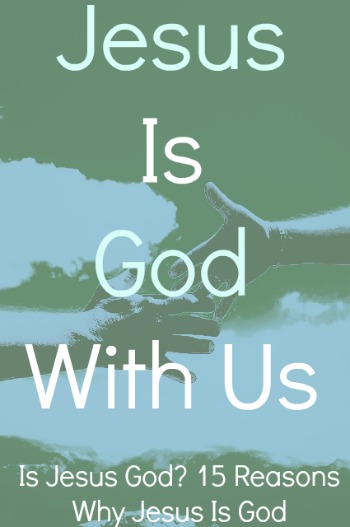 To openly deny the Trinity is heresy and it is damnable. The Bible makes it clear that there is one God in three divine persons, the Father, Son, and the Holy Spirit.

Jesus reiterates God on various occasions. Jesus is “I Am.” Jesus was saying He was the eternal God incarnate. Such a statement was blasphemy to the Jews. Jesus says that those who reject Him as God incarnate will die in their sins.

The Father called the Son God.

I was talking to a Jehovah Witness the other day and I asked him, would God the Father ever call Jesus Christ God? He said no, but Hebrews 1 disagrees with him. Notice in Hebrews 1 God is spelled with a capital “G” and not a lower case one. God said, “apart from me there is no other God.”

Hebrews 1:8 But unto the Son he saith, Thy throne, O God, is for ever and ever: a sceptre of righteousness is the sceptre of thy kingdom.

Isaiah 45:5 I am the LORD, and there is no other; apart from me there is no God. I will strengthen you, though you have not acknowledged me.

Jesus claimed to be God.

The Jews wanted to stone Jesus because they understood what He was saying and He wasn’t denying it. He was claiming to be God because He is God in the flesh. Would Jesus lie?

John 10:33 The Jews answered him, “It is not for a good work that we are going to stone you but for blasphemy, because you, being a man, make yourself God.”

John 19:7 The Jews answered him, “We have a law, and according to that law he ought to die because he has made himself the Son of God.”

Philippians 2:6  Who, being in very nature God, did not consider equality with God something to be used to his own advantage.

The Bible makes it clear that God is the only one who is able to forgive sins. However, Jesus forgave sins while on Earth.

Mark 2:7  “Why does this man speak like that? He is blaspheming! Who can forgive sins but God alone?”

Isaiah 43:25 “I, even I, am he who blots out your transgressions, for my own sake, and remembers your sins no more.”

Mark 2:10 “But I want you to know that the Son of Man has authority on earth to forgive sins.” So he said to the man.

Only God is to be worshiped. When John tried to worship an angel, he was rebuked. The angel told John to “worship God.” Jesus received worship and unlike the angel He didn’t rebuke those worshiping Him. If Jesus was not God, then He would have rebuked others who prayed and worshiped to Him.

Matthew 2:11 And when they were come into the house, they saw the young child with Mary his mother, and fell down, and worshipped him: and when they had opened their treasures, they presented unto him gifts; gold, and frankincense, and myrrh.

Matthew 14:33 Then those who were in the boat worshiped him, saying, “Truly you are the Son of God.”

1 Peter 3:15 Instead, you must worship Christ as Lord of your life. And if someone asks about your Christian hope, always be ready to explain it.

Jesus is called the “Son of God.”

Some people try to use this to prove that Jesus is not God but I use it to prove that He is God. We must first notice that both Son and God are capitalized. Also, in Mark 3 James and his brother were called Sons of Thunder. Were they “Sons of Thunder.” No! They had attributes of thunder.

Mark 3:17 and James, the son of Zebedee, and John the brother of James (to them He gave the name Boanerges, which means, “Sons of Thunder”).

1 Timothy 3:16 And without controversy great is the mystery of godliness: God was manifest in the flesh, justified in the Spirit, seen of angels, preached unto the Gentiles, believed on in the world, received up into glory.

John 1:14 And the Word became flesh, and dwelt among us, and we saw His glory, glory as of the only begotten from the Father, full of grace and truth.

Luke 1:35 The angel answered and said to her, “The Holy Spirit will come upon you, and the power of the Most High will overshadow you; and for that reason the holy Child shall be called the Son of God.”

Jesus calls Himself the Son of Man.

Notice in the Bible that Jesus calls Himself the Son of Man. Jesus Reveals Himself as the Messiah. He was giving Himself a Messianic title which was worthy of death to the Jews.

Daniel 7:13-14 The Son of Man Presented “I kept looking in the night visions, And behold, with the clouds of heaven One like a Son of Man was coming, And He came up to the Ancient of Days And was presented before Him. “And to Him was given dominion, Glory and a kingdom, That all the peoples, nations and men of every language Might serve Him. His dominion is an everlasting dominion Which will not pass away; And His kingdom is one Which will not be destroyed.”

Jesus has no beginning and no end. He was involved in creation.

Revelation 21:6 And he said to me, “It is done! I am the Alpha and the Omega, the beginning and the end. To the thirsty I will give from the spring of the water of life without payment.”

Colossians 1:16-17 For by Him all things were created, both in the heavens and on earth, visible and invisible, whether thrones or dominions or rulers or authorities– all things have been created through Him and for Him. He is before all things, and in Him all things hold together.

Jesus reiterates the Father and calls Himself “the First and the Last.”

Isaiah 44:6 “Thus says the LORD, the King of Israel and his Redeemer, the LORD of hosts: ‘I am the first and I am the last, And there is no God besides Me.’

Revelation 22:13 “I am the Alpha and the Omega, the First and the Last, the Beginning and the End.”

There is no Savior besides God.

Jesus is the only Savior. If Jesus is not God, then that means God is a liar.

Hosea 13:4 “But I have been the LORD your God ever since you came out of Egypt. You shall acknowledge no God but me, no Savior except me.”

John 4:42 and they were saying to the woman, “It is no longer because of what you said that we believe, for we have heard for ourselves and know that this One is indeed the Savior of the world.”

To see Jesus is to see the Father.

John 14:9 Jesus answered: “Don’t you know me, Philip, even after I have been among you such a long time? Anyone who has seen me has seen the Father. How can you say, ‘Show us the Father‘?

Colossians 1:15 The Son is the image of the invisible God, the firstborn over all creation.

Hebrews 1:3 The Son is the radiance of God’s glory and the exact representation of His nature, upholding all things by His powerful word. After He had provided purification for sins, He sat down at the right hand of the Majesty on high.

All authority has been given to Christ.

Matthew 28:18 And Jesus came up and spoke to them, saying, “All authority has been given to Me in heaven and on earth.”

Ephesians 1:20-21 that he worked in Christ when he raised him from the dead and seated him at his right hand in the heavenly places, far above all rule and authority and power and dominion, and above every name that is named, not only in this age but also in the one to come.

Colossians 2:9-10 For in him the whole fullness of deity dwells bodily, and you have been filled in him, who is the head of all rule and authority.

Jesus is the way

John 14:6 Jesus said to him, “I am the way, and the truth, and the life. No one comes to the Father except through me.”

John 11:25 Jesus said to her, “I am the resurrection and the life. The one who believes in me will live, even though they die.”

Jesus is called names that only God is called.

Jesus has many nicknames in Scripture such as Everlasting Father, Bread of Life, Author and Perfecter of Our Faith, Almighty One, Alpha and Omega, Deliverer, Great High Priest, Head of the Church, Resurrection and the Life, and more.

Isaiah 9:6 For to us a child is born, to us a son is given; and the government shall be upon his shoulder, and his name shall be called Wonderful Counselor, Mighty God, Everlasting Father, Prince of Peace.

Hebrews 12:2 looking unto Jesus, the author and finisher of our faith, who for the joy that was set before Him endured the cross, despising the shame, and has sat down at the right hand of the throne of God.

John 8:12 Then spake Jesus again unto them, saying, I am the light of the world: he that followeth me shall not walk in darkness, but shall have the light of life.

God Almighty was seen on various different occasions in Scripture.

God was seen but there are various Scriptures in the Bible that teach us that no one can see the Father. The question is then, how was God seen? The answer must be someone else in the Trinity was seen.

Jesus says no one has seen the Father. When God is seen in the Old Testament it has to be the preincarnate Christ. The simple fact that God was seen shows that Jesus is God Almighty.

Genesis 17:1 Now when Abram was ninety-nine years old, the Lord appeared to Abram and said to him, “I am God Almighty; Walk before Me, and be blameless.

John 1:18 No one has ever seen God, but the one and only Son, who is himself God and is in closest relationship with the Father, has made him known.

The Trinity is found in Genesis

Genesis 1:26 Then God said, “Let Us make man in Our image, according to Our likeness; and let them rule over the fish of the sea and over the birds of the sky and over the cattle and over all the earth, and over every creeping thing that creeps on the earth.”

Genesis 3:22 And the LORD God said, “The man has now become like one of us, knowing good and evil. He must not be allowed to reach out his hand and take also from the tree of life and eat, and live forever.”