Bible verses about other religions

You always hear how do we know which religion is right? First, Jesus says He’s the only way, which is saying all the other different religions are false. Accepting Him is the only way into Heaven. The books of other religions contradict themselves such as the Quran which says the Bible can’t be corrupted and has never been corrupted. Some religions have many gods and Christianity has one God. 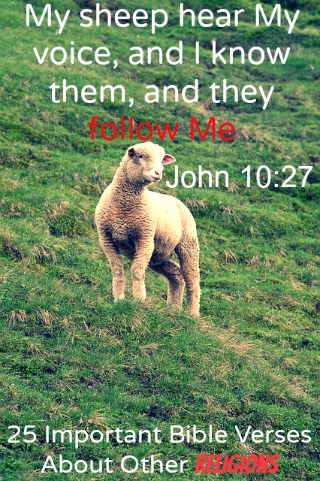 We have to narrow down the list and Christianity will be the last one standing. All religions can’t be true. False religions are popping up out of nowhere like Mormonism, which started less than 200 years ago.

Jehovah Witnesses, Islam, and Mormons claim Jesus is not God. It’s either Christianity is true or they are true. Man, prophet, or angels can’t die for the sins of the world only God in the flesh can.

Prophets don’t lie and Jesus said that He is the only way. If you say Jesus was a prophet that means He’s not lying. Only God is good enough. God does not share His glory with anyone.

Jesus has to be God and He said He was God. Other religions are saved by works, this, that, etc. If man is evil how can he be saved by works? Jesus came to die for the sins of man.

If we’re saved by works there would be no reason for Jesus to die. There is no other book like the Bible. 40 different authors, 66 books, in 15 centuries. It is prophetically accurate.

Throughout Scripture you see that prophecies of Jesus and others prophecies came true. Not one prophecy has failed and prophecies are still coming true before our eyes. The prophecies for other religions are not 100% true.

Scripture has archaeological evidence. Jesus made claims and backed them up with awesome miracles. Scripture has eyewitness evidence and the resurrection of Jesus was real. It accurately describes the heart of man. There are things in it only God would know.

The Bible has too much intelligence and it gives answers to things that science can’t give answers to. Many writers didn’t know each other, but it all comes together perfectly. The most attacked book is the Bible, but God’s Word will not be denied and His Words have come to pass and they will continue to come to pass.

Through intense scrutiny over centuries the Bible still stands and it puts all these false religions and their false gods to shame. Plain and simple all religions besides Christianity are false.

We get morality from the Bible and other religions teach so much evilness such as God says, “thou shall not kill,” but radical Muslims, want to kill people. John 16:2 “They will put you out of the synagogues. Indeed, the hour is coming when whoever kills you will think he is offering service to God.”

1. 1 John 4:1 Dear friends, don’t believe all people who say that they have the Spirit. Instead, test them. See whether the spirit they have is from God, because there are many false prophets in the world.

2. Proverbs 14:12 There is a path before each person that seems right, but it ends in death.

3. Ephesians 6:11 Put on all of God’s armor so that you will be able to stand firm against all strategies of the devil.

Psalm 22 prophecy of Jesus came true. Jesus who claimed to be God died, was buried, and rose again. There were many witnesses and He says He is the only way. God is not a God of confusion.

4. Psalm 22:16-18 Dogs surround me, a pack of villains encircles me; they pierce my hands and my feet. All my bones are on display; people stare and gloat over me. They divide my clothes among them and cast lots for my garment.

6. 1 Corinthians 14:33 For God is not a God of confusion but of peace. As in all the churches of the saints.

7. Isaiah 7:14 Therefore the Lord himself will give you a sign: The virgin will conceive and give birth to a son, and will call him Immanuel.

Christianity teaches that there is one death and then judgment. Catholicism teaches purgatory and Hinduism teaches reincarnation.

9. Hebrews 9:27 And as it is appointed unto men once to die, but after this the judgment.

Jesus is God in the flesh.

11. John 1:14 And the Word was made flesh, and dwelt among us, (and we beheld his glory, the glory as of the only begotten of the Father,) full of grace and truth.

12. 1 Timothy 3:16 Great indeed, we confess, is the mystery of godliness: He was manifested in the flesh, vindicated by the Spirit, seen by angels, proclaimed among the nations, believed on in the world, taken up in glory.

13. Ephesians 2:8-9 For by grace you have been saved through faith. And this is not your own doing; it is the gift of God, not a result of works, so that no one may boast.

14. Galatians 2:21 I do not set aside the grace of God, for if righteousness could be gained through the law, Christ died for nothing!”

If Jesus is not God, then God is a liar.

16. Isaiah 42:8 I am the LORD; that is my name! I will not give my glory to anyone else, nor share my praise with carved idols.

Hinduism and Mormonism which was started less than 200 years ago teaches that there are many gods and you yourself can be one. Blasphemy!

17. Isaiah 44:6 Thus says the Lord, the King of Israel and his Redeemer, the Lord of hosts: “I am the first and I am the last; besides me there is no god.”

18. Deuteronomy 4:35 To you it was shown, that you might know that the LORD is God; there is no other besides him.

Christianity is the most hated religion and there is a reason for that.

22. Galatians 1:6-9 I am shocked that you are turning away so soon from God, who called you to himself through the loving mercy of Christ. You are following a different way that pretends to be the Good News but is not the Good News at all. You are being fooled by those who deliberately twist the truth concerning Christ. Let God’s curse fall on anyone, including us or even an angel from heaven, who preaches a different kind of Good News than the one we preached to you. I say again what we have said before: If anyone preaches any other Good News than the one you welcomed, let that person be cursed.

24. 2 Timothy 4:3-4 For the time is coming when people will not endure sound teaching, but having itching ears they will accumulate for themselves teachers to suit their own passions, and will turn away from listening to the truth and wander off into myths.

25. 1 Timothy 4:1 Now the Spirit speaketh expressly, that in the latter times some shall depart from the faith, giving heed to seducing spirits, and doctrines of devils.

Bonus: Why have we stopped defending Christianity?

1 Peter 3:15 But in your hearts honor Christ the Lord as holy, always being prepared to make a defense to anyone who asks you for a reason for the hope that is in you; yet do it with gentleness and respect.

Previous: Comparing Yourself To Others

Next: Not Fitting In