Why are we allowing false teachers to spread lies throughout Christianity? Why aren’t more people standing up? The church of Jesus Christ is married to the world. Does that bother you at all? We must defend the faith! 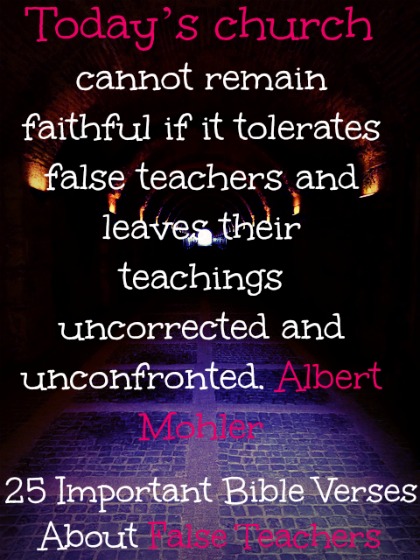 False prophets spread the evil prosperity gospel because of their greed. Buy this holy cloth for 19.99 and God will give you a huge financial blessing.

False preachers say things like Hell is not real, Jesus is not God, I can’t judge, you can be Christian and live in rebellion.

These preachers never preach on sin because they don’t want to offend anyone. They twist the Bible to justify sin.

Clear teachings in the Bible they throw away. They are proud and conceited people. They are on Rolling Stone Magazine because the world loves them. Awesome!

A Christian who doesn’t do what Christians are supposed to do. Many are just motivational speakers. They only talk about love and your best life now. Who’s going to talk about the severity of God?

How will you be able to judge against a good and a bad friend? Christians can identify false prophets by aligning what they teach and say with Scripture and also by how they act.

If something seems fishy look in the Scripture for yourself and judge with righteousness so the truth is not blasphemed.

The sin of greed. The reason why we have many false teachers. For many it’s a get rich quick scheme. Others don’t speak the truth because that will cause people to leave their church. Less people means less money.

1. 1 Timothy 6:5 These people always cause trouble. Their minds are corrupt, and they have turned their backs on the truth. To them, a show of godliness is just a way to become wealthy.

Increase in false teachings in Christianity!

2. 2 Timothy 4:3-4 A time will come when people will not listen to accurate teachings. Instead, they will follow their own desires and surround themselves with teachers who tell them what they want to hear. People will refuse to listen to the truth and turn to myths.

How to identify false teachers?

3. Isaiah 8:20 Look to God’s instructions and teachings! People who contradict his word are completely in the dark.

4. Malachi 3:18 Then you will again see the difference between the righteous and the wicked, between those who serve God and those who do not.”

5. Matthew 7:15-17 “Beware of false prophets who come disguised as harmless sheep but are really vicious wolves. You can identify them by their fruit, that is, by the way they act. Can you pick grapes from thornbushes, or figs from thistles? A good tree produces good fruit, and a bad tree produces bad fruit.

6. 1 John 2:22 And who is a liar? Anyone who says that Jesus is not the Christ. Anyone who denies the Father and the Son is an antichrist.

7. Galatians 5:22-26 But the fruit of the Spirit is love, joy, peace, patience, kindness, goodness, faithfulness, gentleness, and self-control. There is no law against such things. Now those who belong to the Messiah Jesus have crucified their flesh with its passions and desires. Since we live by the Spirit, by the Spirit let us also be guided. Let’s stop being arrogant, provoking one another and envying one another.

Can we judge and expose false teachers?

8. 1 Timothy 1:3-4 When I left for Macedonia, I urged you to stay there in Ephesus and stop those whose teaching is contrary to the truth. Don’t let them waste their time in endless discussion of myths and spiritual pedigrees. These things only lead to meaningless speculations, which don’t help people live a life of faith in God

9. Ephesians 5:11 Take no part in the unfruitful works of darkness, but instead expose them.

10. 1 Timothy 1:18-20 Timothy, my child, I am instructing you in keeping with the prophecies made earlier about you, so that by following them you may continue to fight the good fight with faith and a good conscience. By ignoring their consciences, some people have destroyed their faith like a wrecked ship. These include Hymenaeus and Alexander, whom I handed over to Satan so that they may learn not to blaspheme.

Watch out for false doctrine.

11. Galatians 1:7-8  not that there really is another gospel, but there are some who are disturbing you and wanting to distort the gospel of Christ. But even if we (or an angel from heaven) should preach a gospel contrary to the one we preached to you, let him be condemned to hell!

12. 2 John 1:10-11 If anyone comes to you and does not bring this teaching, do not receive him into your house and do not give him any greeting, because the person who gives him a greeting shares in his evil deeds.

13. Romans 16:17-18 And now I make one more appeal, my dear brothers and sisters. Watch out for people who cause divisions and upset people’s faith by teaching things contrary to what you have been taught. Stay away from them.  Such people are not serving Christ our Lord; they are serving their own personal interests. By smooth talk and glowing words they deceive innocent people.

14. Colossians 2:8 See to it that no one takes you captive by philosophy and empty deceit, according to human tradition, according to the elemental spirits of the world, and not according to Christ.

Warning against adding, taking away, and twisting Scripture.

Testing the spirit: Guard yourself with the Bible.

16. 1 John 4:1 Dear friends, do not believe everyone who claims to speak by the Spirit. You must test them to see if the spirit they have comes from God. For there are many false prophets in the world.

18. 2 Timothy 3:16 All scripture is given by inspiration of God, and is profitable for doctrine, for reproof, for correction, for instruction in righteousness:

19. 2 Timothy 4:2 Be ready to spread the word whether or not the time is right. Point out errors, warn people, and encourage them. Be very patient when you teach.

20. Titus 3:10-11 As for a person who stirs up division, after warning him once and then twice, have nothing more to do with him, knowing that such a person is warped and sinful; he is self-condemned.

21. Ephesians 4:14-15 Then we will no longer be immature like children. We won’t be tossed and blown about by every wind of new teaching. We will not be influenced when people try to trick us with lies so clever they sound like the truth. Instead, we will speak the truth in love, growing in every way more and more like Christ, who is the head of his body, the church.

22. Jude 1:4 For certain individuals whose condemnation was written about long ago have secretly slipped in among you. They are ungodly people, who pervert the grace of our God into a license for immorality and deny Jesus Christ our only Sovereign and Lord.

24. 2 Timothy 3:5 They will act religious, but they will reject the power that could make them godly. Stay away from people like that!

25. John 8:44 You belong to your father, the devil, and you want to carry out your father’s desires. He was a murderer from the beginning, not holding to the truth, for there is no truth in him. When he lies, he speaks his native language, for he is a liar and the father of lies.