Theism Vs Deism Vs Pantheism

The world is filled with a large variety of belief systems. All but one, Christianity, are false. Many of these false beliefs can be understood by exploring three basic terms: theism, deism, and pantheism. 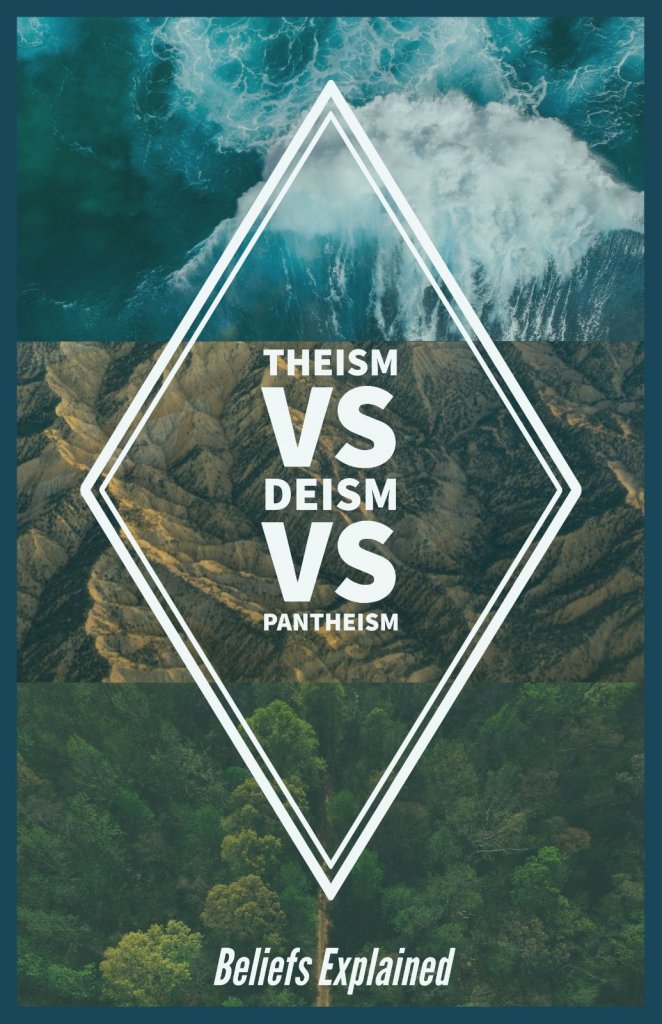 Theism is the belief that there are gods or a god who created the world and have had some interaction with it. This interaction could be to any variation of a degree.

The Bible is clear that there is only one God – the Lord, the Creator of the Universe. And He is Holy.

Ephesians 4:6 “One God and Father who is over all and through all and in all.”

1 Timothy 2:5 “For there is one God, and one mediator also between God and men, the man Christ Jesus.”

Psalm 90:2 “Before the mountains were brought forth, or ever thou hadst formed the earth and the world, even from everlasting to everlasting, thou art God.”

Deuteronomy 4:35 “To you it was shown that you might know the LORD, He is God; there is no other besides Him.”

Deism is the belief in God, but a denial that God is involved in the world to any degree. It states that God created the world and then left it to the governing rules He has set in place and makes no attempt to involve Himself in the lives or actions of humans. Deists worship a completely impersonal Creator and exalt Logic and Reason above everything else. The World Union of Deists say this about the Bible “[it] paints a very evil and insane picture of God.”

Most historians trace Deism back to Lord Edward Herbert of Cherbury. He laid the foundation for what became the belief of Deism. Lord Edward beliefs diverged from Christianity as he began to follow a “natural religion based on reason.” Later, Charles Blount further wrote about his beliefs that were based on Lord Edwards. He was very critical of the Church and denied ideas about miracles, revelations. Charles Blount also wrote about his doubting the authenticity of the book of Genesis. Later came Dr. Thomas Young and Ethan Allen who wrote a book the very first book on Deism published in America. Thomas Paine is one of the most famous early Deists. One quote by Thomas Paine is “The creation is the Bible of the Deist. He there reads, in the handwriting of the Creator himself the certainty of his existence and the immutability of his power, and all other Bibles and Testaments are to him forgeries.”

There is not a clear answer to the Deists perspective on afterlife. They as a whole are very open to individual interpretations of truth. Many Deists believe in a variation of the afterlife that includes Heaven and Hell. But some believe that we will exist merely as energy in the great Cosmos.

Clearly, Deists do not worship the God of the Bible. They worship a false god of their own making. They do affirm one thing that Christians do – that God has provided proof of His existence in creation. But any similarities stop there. Salvific knowledge can’t be found in the observation of creation. They view man as a rational being who is in charge of his own destiny, and they deny any special revelation from God. Scripture is clear that we can learn about our very personal God through His Word and that God is highly involved with His creation.

2 Timothy 3:16-17 “All Scripture is given by inspiration of God, and is profitable for doctrine for reproof, for correction, for instruction in righteousness, that the man of God may be complete, thoroughly equipped for every good work.”

1 Corinthians 2:14 “But the natural man does not receive the things of the Spirit of God, for they are foolishness to him; nor can he know them, because they are spiritually discerned.”

1 Corinthians 12:3 “Therefore I want you to understand that no one speaks in the Spirit of God ever says, ‘Jesus is accursed!’ and no one can say ‘Jesus is Lord’ except in the Holy Spirit.”

Proverbs 20:24 “A person’s steps are directed by the Lord. How then can anyone understand their own way?”

Isaiah 42:5 “This is what God the Lord says – the Creator of the heavens, who stretches them out, who spreads out the earth with all that springs from it, who gives breath to its people, and life to those who walk on it.”

Pantheism is the supposition behind many non-Christian religions such as Buddhism and Hinduism, as well as several new age cults. Pantheism is not a biblical belief at all.

God is Omnipresent, but this is not pantheism. The Bible affirms that He is everywhere, but it does not mean that everything is God.

Genesis 1:1 “In the beginning, God created the heavens and the earth.”

Nehemiah 9:6 “You alone are he Lord. You made the skies and the heavens and all the stars. You made the earth and the seas and everything in them. You preserve them all and the angels of heaven worship you.”

Revelation 4:11 “Worthy are you, our Lord and God, to receive glory and honor and power, for you created all things, and by your will they existed and were created.”

We can know with absolute certainty what God has revealed about Himself in His Word. We can know that our God is a Holy, Just, and Loving God who is intimately involved with His creation.

The Bible teaches us that we are all born sinners. God is a Holy, and we being sinners are unholy and cannot come near a Holy God. Our sin is treason against Him. God being a perfect and just Judge has to issue a righteous judgement upon us – and our punishment is eternity in Hell. But Christ paid the penalty for our treason and died upon a cross, and three days later He rose from the dead. If we repent of our sins and put our faith in Christ we can be set free from the bondage of sin. We will be given a new heart with new desires. And we will spend eternity with the Lord.

Romans 5:8 “But God showed His great love for us by sending Christ to die for us while we were still sinners.”

Next: Bible Verses About Victory In Christ