Buddhism is one of the world’s largest religions. An estimated 7% of the global population would consider themselves Buddhists. So, what do Buddhists believe and how does Buddhism stack up against Christianity? That is what we are attempting to answer with this article. 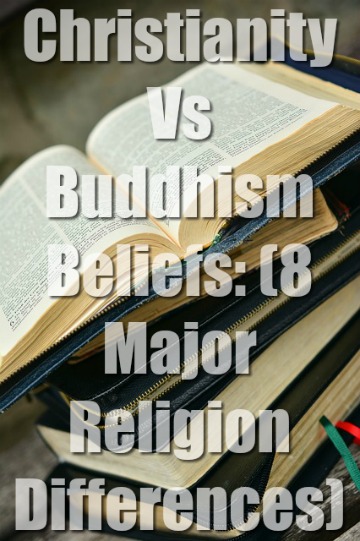 One note of caution for the reader: Buddhism is a broad and general term, encompassing many diverging systems of thought within the Buddhistic worldview. Thus, I will describe what most Buddhists believe and practice accurately but also very generally.

The Christian Bible begins with the words, “In the Beginning, God…” (Genesis 1:1). The story of Christianity dates to the beginning of human history. All of the Bible is an account of God’s redemptive purposes with man, which culminates in the person and work of Jesus Christ, the establishment of the church, and what we know today as Christianity.

After the death, burial, resurrection, and ascension of Jesus Christ (mid 30’s A.D.), and the completion of the New Testament (late 1st century A.D.), Christianity began to take the form that we recognize today. However, its roots go back to the dawn of human existence.

Buddhism began with the historical Buddha, whose name was Siddhartha Gautama in present- day India. Gautama lived sometime between 566-410 B.C. (exact dates or even years of Gautama’s life are unknown). The philosophy of Gautama, which we now know as Buddhism, developed slowly over the years. Buddhists don’t believe that Buddhism actually began with Gautama, but that it has eternally existed and was merely discovered and shared by Buddha, the grand way-sharer.

Christians believe that sin is any thought, action (or even an inaction) which is against the law of God. It is doing something that God forbids, or not doing something God commands.

Christians believe that Adam and Eve are the first people to commit sin, and having sinned, they plunged the human race into sin and corruption (Romans 5:12). Christians sometimes refer to this as original sin. Through Adam, all people are born in sin.

Christians also believe that everyone individually commits sin (see Romans 3:10-18) through personal rebellion against God. The Bible teaches that the penalty of sin is death (Romans 6:23), and this penalty is what necessitates the atonement of Jesus Christ (the only one who never sinned).

Buddhism denies the Christian notion of sin. The closest thing to sin in Buddhism is moral error or misstep, which is 1) normally committed in ignorance, 2) is amoral and 3) is ultimately correctible through greater enlightenment. Sin is not a transgression against a supreme moral being, but an action against nature, with significant and often harmful consequences.

Christians believe that, because of sin and God’s Holy nature, all sin must be punished. Jesus Christ absorbed the punishment of all who trust in Him who are then justified by faith alone in Christ. Christians hold that a person who is justified will ultimately be glorified (see Romans 8:29-30). That is, they will overcome death and be finally saved, dwelling forever in the presence of God.

Of course, Buddhists deny that. In fact, a Buddhist denies even the existence of a supreme and sovereign God. A Buddhist seeks “salvation” in terms of realized higher states of being, the highest of which is Nirvana.

However, since Nirvana is outside the realm of rational thought, it cannot be taught with any specificity, only realized through a full disassociation with “attachments” or desires and by following the correct path of enlightenment.

Since attachments lead to suffering, disassociating with these desires leads to less suffering, and more enlightenment. Nirvana is the cessation of suffering for an individual, and the ultimate “salvation” a devout Buddhist seeks.

Buddhists do not believe in God like that. Buddhists often pray to Buddha or recite his name in their prayers, but they do not believe that Buddha is divine. Rather, Buddhists believe that all of nature – and all the energy in nature – is god. The god of Buddhism is impersonal – more akin to a universal law or principle, than a moral and actual being.

Christians believe that mankind is the pinnacle of God’s creative work, and that mankind alone is made in the image of God (Genesis 1:27). As God’s special creation, humans are unique among creatures, and unique in regards God’s dealings with His creation.

In Buddhism, human beings are viewed as one of many “sentinel beings”, meaning that they capable, in contrast to other animals, of attaining enlightenment. Man is even capable of becoming a fully enlightened Buddha. Unlike many other types of being, humans have the means to seek the correct path.

Christians see suffering as a temporary part of God’s sovereign will, which He uses to refine a Christian’s faith in God (2 Corinthians 4:17), and even to discipline a Christian as a parent would a child (Hebrews 12:6). A Christian can take joy and have hope because all Christian suffering will one day give way to glory – glory so wonderful that all the suffering one endures in a lifetime pales by comparison (See Romans 8:18).

One could say that Buddhism is an attempt to answer the problem of suffering. Desire and ignorance are at the root of all suffering. And so the answer is to disassociate from all desire (attachments) and become enlightened by following the correct teachings of Buddhism. For the Buddhist, suffering is the most pressing question.

The very first commandments in God’s law are to not have any idols before God and to not make carved images or bow down to them (Exodus 20:1-5). Thus, for Christians, idol worship is sin. Indeed, it is at the heart of all sin.

That Buddhists worship idols (a Buddhist temple or monastery is full of carved images!) is controversial. Buddhist practice, especially before shrines or at temples, looks to observers like a form of worship. Buddhists themselves say, however, that they are merely paying respect or homage to the images – and that that is not worship.

Nevertheless, Buddhists do, in fact, bow down to statues and images. And that is something specifically forbidden in the Bible and associated explicitly with idolatry.

Christians believe that to be absent from the body is to be in the presence of Christ (2 Corinthians 5:8) for all who trust in Christ. Furthermore, all whose faith is in Jesus will dwell forever in the New Heaven and the New Earth (Revelation 21).

Those who do not know Christ perish in their sin, are judged according to their deeds, and dwell forever in torment, away from the presence of Christ (2 Thessalonians 1:5-12).

Buddhists have an entirely different understanding of the afterlife. Buddhists believe in a cycle of life called samsara, and are reincarnate at death and thus, death restarts the cycle. This reincarnation is governed by karma. The cycle can eventually be escaped by enlightenment, at which time a person enters Nirvana, and the end of suffering.

Goal of each religion

Every worldview seeks to answer some basic questions, such as: Where did we come from and why? Why do we exist now? And what comes next? Every religion tries to answer those questions in one way or another.

Buddhism is no exception, though Buddhism does not offer a good answer for where humans (or the universe) came from. On this point, many Buddhists simply syncretize the secular worldview, and accept the randomness of evolution. Other prominent Buddhist teachers teach that Buddhists to simply not dwell on such things.

Buddhism does attempt to answer why we exist now, and what comes next, though its answers are at best very complex, and at worst, ambiguous and inconsistent.

Only Christianity offers satisfying answers for all of these important questions. We were created by God, and exist for Him (Colossians 1:16).

The Buddhist sees, as the goal of all other religions, as an attempt at achieving a more enlightened state. Thus, Buddhists can be very tolerant of competing religions.

Many have charged that Buddhists are atheists. Is this the case? Yes and no. Yes, they are classically atheists in the sense that they reject the notion of a supreme being, who created and governs the world.

But it can be argued that it is more appropriate to see Buddhism as a form of pantheism. That is, that Buddhists see everything as god and god as everything. God is an impersonal force coursing through the universe and through all living things.

So yes, in one sense Buddhists are atheists since they deny the existence of God. And no, they are not atheists per se, since they would see everything as divine in one sense.

Can a Buddhist Become a Christian?

Buddhists, like people of all religions, can become Christians. Of course, for a Buddhist to become a Christian he or she will need to reject the errors of Buddhism and believe in Jesus Christ alone.

Many Christians have reported difficulty in sharing Christ with Buddhists because of their tolerance for other religions, which they see as simply other attempts to find the correct way – the way to be enlightened. A Christian must help the Buddhist see that his worldview is fundamentally at odds with the gospel.

Thankfully, many thousands of Buddhists from around the world, but especially in the East, have rejected Buddhism and trusted in Christ. Today, there are thriving churches in people groups that were formally 100% Buddhists.

But there is much to be done!