Atheism and Theism are polar opposites. The religion of Atheism is growing quickly. How can we understand the differences? How can we as Christians know how to handle discussions about this debate when it arises? 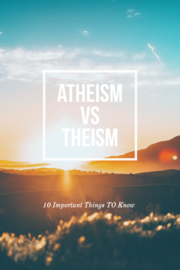 Atheism is a non-structured religion with a belief centered around the non-existence of God. Atheism is non-structured in that typically there are no tenants or doctrines of faith, no universally organized worship experience, and no universally acknowledged worldview. In fact, some atheists claim that Atheism isn’t even a religion but simply a belief system, while others will hold tightly to the claim that it is indeed a religion and even preform worship ceremonies.

Theism comes from the Greek word, “theos,” which means “god.” When you add the A prefix in front of it, it means “without.” Atheism literally means, “without god.” Atheists rely on science to explain the existence of life and the cosmos. They claim that they can have morality without God and that the concept of a diety is merely myth. Most atheists also claim that even though the complex design of life does suggest a Designer, there is far too much suffering to warrant the belief in a god of any form. However, atheists cannot prove that God does not exist. They have to have faith in their viewpoint.

The history of Atheism

Atheism was even a problem in the Bible. We can see that in Psalms.

Psalm 14:1 “The fool says in his heart, ‘There is no God.’ They are corrupt, they do abominable deeds, there is none who does good”

Atheism has existed in many forms throughout history. Many of the eastern religions such as Buddhism and Taoism deny the existence of a deity. In the 5th Century the “First Atheist”, Diagoras of Melos lived and propagated his belief. This belief carried over into the Enlightenment and was even a contributing factor in the French Revolution. Atheism is also a major factor in the Feminist Movement and can be seen in the modern sexual revolution and in the homosexual agenda. Many groups within modern satanism also claim to be atheists.

The history of Theism

Theism ultimately started in the Garden of Eden. Adam and Eve knew God and walked with Him. Many philosophers claim that Theism started with the Judeo-Christian-Muslim religions: that the author of Genesis was the first to promote Theism when he depicted Yahweh as not being simply a star or a moon but the creator of all things.

Since Theism includes not only Monotheism, but also Polytheism, Deism, Autotheism, Pantheism, and Panentheism, there is a wide plethora of religions that fall under this category. But even amongst this category, most of the tenants are believing false ideologies. Monotheism is the belief in only one God. Only Monotheism can possibly be true. And then only Christianity has the proper understanding of God.

The most common argument for Atheism is the Problem of Evil. That will be discussed below. Other arguments for Atheism include the problem of religious diversity: “If God exists, then why are there so many conflicting understandings of how He is to be known and worshipped?”  This argument is easy to refute – it all goes back to a proper understanding of Biblical Hermeneutics. Anytime we understand the Bible outside of the realm of proper biblical hermeneutics we stray from God’s truth. If we try to understand God outside of His revealed truth we are not worshipping a true God. There is only One God and one way to understand Him: in the way He has revealed to us in His Scripture.

Laws of logic, laws of morality all indicate a creator God. Also the evidence seen in the laws of nature and in the design of creation. The Problem of Evil is without a doubt a very strong argument for Theism. Also there are clear arguments from Scripture, from Reason, and Ontological Arguments.

Which one is right and why?

How to respond to atheist questions?

That is why we have to incorporate Presuppositional Apologetics, or an “Argument from Reason”, before we can attempt to throw the evidences at them. The Atheist’s viewpoint makes a lot of presuppositions. If we show them the inconsistency in their presuppositions, their worldview falls apart. Then if we show them that the Christian worldview is always consistent – we have an opportunity to present the Gospel.

The Atheist cannot give a fully rational account of the assumptions of ethics or of the laws of logic. Their worldview falls apart quickly. Atheism automatically presupposes that 1) there is no rational, holy, and sovereign Creator and 2) that their own conclusions are totally and rationally justified. Both of these two cannot be correct. If a belief exists without reason, then anything drawn from that belief will also be without reason. And if there is no holy, sovereign and rational God, then all of man’s beliefs about the world have existed without reason. That would make all man’s beliefs about the world totally irrational. Both can’t be true.

The most common question I hear from Atheists is “If there is a God, why is there so much evil in the world?” Christianity teaches that God created all things, and that He called all things good. So evil therefore, is not an actual thing but a corruption of that which was good. The problem of evil is actually an argument for God, not against Him. Atheists have to explain why there is both good and evil, whereas Christians can quickly explain the good and can even explain the evil. God allows the evil due to the corruption of sin. God uses natural evils (natural disasters, sickness, etc) to illustrate for us how detrimental personal evil (crime, war, etc) is. We know that God is holy and just. And He only allows that which will cause Him the most glory. He uses evil for displaying His grace, and justice. He also uses evil to show us how marvelous salvation is. This question inevitably will bring us to the cross. If God is perfectly holy and completely just, how can we wicked sinners who deserve God’s wrath be bestowed grace merited to us through Jesus’s atoning work on the cross?

Even though the debate between Atheism and Theism seems daunting at first, the answer is very clear. Science affirms that the entire cosmos was created out of nothing. All of life’s design and complexity points to an Intelligent Designer. The Bible is completely trustworthy without error or contradiction. And to have morality it requires a standard that is completely transcendent – a perfectly pure and holy God.

Ultimately Atheism boils down to a hatred of God and a refusal to submit to His commands. It is a religion that worships and idolizes Self. This is the core of all sins: self-idolatry, which is a direct opposition to worshipping God. Anytime we set our self in opposition to God it is treason against the Holy Creator of the Universe. The punishment for a crime is dependent upon to whom the crime is against. If I lie to my toddler, nothing really happens. If I lie to my spouse, I may be sleeping on the couch. If I lie to my boss, I will lose my job. If I lie to the president that was at one time considered treason and was punishable by hanging. How much more so is treason against our Holy God, our Judge?

A crime against an eternal and Holy Person requires an equally eternal punishment. An eternity in torment in Hell. But God, desiring to show His Grace and Mercy, decided to provide payment for our crimes. He sent His Son, Christ, who is God wrapped in Flesh, the second Person of the Trinity, who was completely sinless, to die in our place. Christ bore our sins on His body when on the cross. The wrath of God poured out on to Him in our place. His death atoned for our sins. Now when God sees us, He can pronounce us guiltless. Our crime has been paid for. Christ imputes His righteousness on us so that when God sees us we are not just innocent, but we can be seen as righteous, as holy because He sees Christ’s righteousness on us. It is by repenting of our sins and trusting in Christ that we can be saved from God’s wrath.

Next: NLT Vs ESV Bible