What Is The Design Argument?

The design argument is one of the widely used arguments in apologetics to make a cumulative case for the existence of God. It is basically about inferring a designer from the design that we see around. 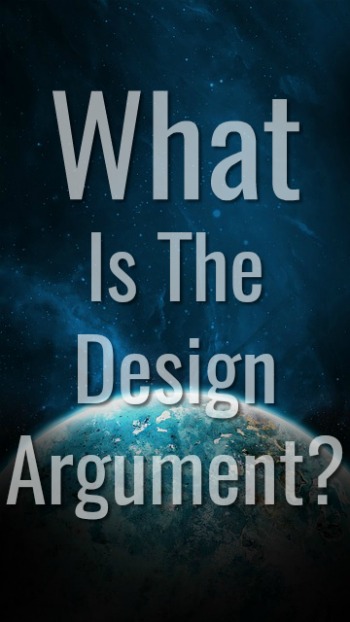 When we see a car or a motorbike or a house, the first thing we know is that there’s a designer behind it. It is never a case that a car or a bike simply appears to be in existence without a designer.

Every design, be it a car or a bike or the whole wide universe, has a designer. The precision with which the universe has been built or the way the universe exploded into being at the big bang provides a robust case for an intelligent designer.

There are quite a few forms of the argument but the most famous is the one proposed by William Paley (1743-1805), who used the watchmaker analogy. It is also known as the teleological argument, which is derived from the Greek word ‘telos’, which means ‘design’.

The Teleological argument for God’s existence

Like any other argument, if anyone wants to deny the conclusion they must refute either premise 1 or premise 2. The first premise talks about three possibilities as to why the universe is fine tuned. It could be either by physical necessity, chance or design. It could not be because of physical necessity, the reason being is that the universe doesn’t have to be the way it is, it could have been otherwise. Many naturalists hold on to the belief that the universe had to be the way it is, it had absolutely no chance of not being the way it is, i.e. life permitting. P.C.W. Davies writes in this regard,

In the recent times Michael Behe has coined the term ‘Irreducible complexity’, especially referring to the kind of complexity found in the living cell. The irreducibly complex system is a system containing several well-matched, interacting parts that contribute to its basic function, and where the loss of any single part causes the system to cease functioning. [3] Behe writes in his book the Darwin’s Black Box,

“The conclusion of intelligent design flows naturally from the data itself – not from sacred books or sectarian beliefs. Inferring that biochemical systems were designed by an intelligent agent is a humdrum process that requires no new principles of logic or science. . . [Thus,] the result of these cumulative efforts to investigate the cell – to investigate life at the molecular level – is a loud, clear, piercing cry of “design!” The result is so unambiguous and so significant that it must be ranked as one of the greatest achievements in the history of science. The discovery rivals those of Newton and Einstein.” (Behe, DBB, 232-33.)

Behe, in his response to the argument that irreducible complexity can evolve in small steps, writes,

“No one at Harvard University, no one at the National Institutes of Health, no member of the National Academy of Sciences, no Nobel Prize winner – no one at all can give a detailed account of how the cilium, or vision, or blood clotting, or any complex biochemical process might have developed in a Darwinian fashion. But we are here. All these things got here somehow; if not in a Darwinian fashion, then how?” (ibid, DBB, 187.)

Other forms of the Teleological argument

The other form of the teleological argument could be stated as follows: –

It could also be stated as follows:-

The argument has also been re-stated by adding the anthropic principle (the precise conditions of the environment), by Frank Turek:-

As we have seen so far the only option out of physical necessity, chance or design that can fully account for the irreducible complexity that we see around is design which logically leads us to the conclusion that there is a Designer behind it.