What Is The Moral Argument For The Existence Of God?

There are many arguments to make a case for the existence of God. However, most of them don’t tell us much about the character of God. 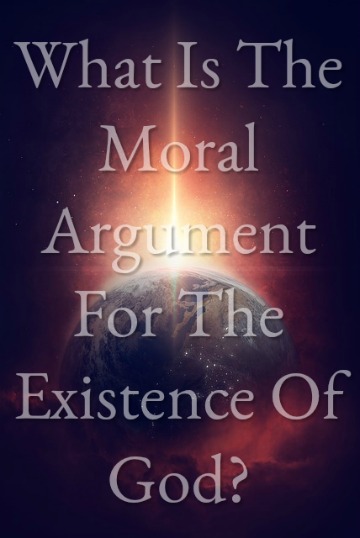 The moral argument comes to our aid in this case. The most acknowledged formal argument is the one used by William Lane Craig which is as follows:

This is a very sound, logical argument wherein the conclusion follows from the premise. If one wants to disprove it, they have to refute the two premises in order to bring about a different conclusion.

As we see around, we can establish the very fact that we do see the existence of objective moral values. Some things are true, morally right or wrong, no matter what one thinks of it. Like for example, rape, murder, child abuse, etc. are objectively evil and they are accepted globally. No sane individual will think that it’s okay to murder or to commit rape. The existence of objective moral duties has more plausibility in the theistic worldview rather than the naturalistic. Because without God, there is nothing right and wrong. Everything simply becomes a matter of subjective opinion. If a person feels good about something, he might find it true. But the other person might have a completely different opinion on that same matter. People end up in absurdity like “it might be true for you, but not for me”. But we know that this is just absolutely rubbish “Facts don’t care about our feelings”. Truth is objective, no matter what one feels about it.

God is the only ultimate standard which provides us that foundation to differentiate between right and wrong. Naturalism fails to provide such a standard on which we can build strong objective morals.

Here’s what Norman Geisler has to say about moral law:

“The evidence for an objective moral law is strong; it is implied in moral judgements that we make, such as, “The world is getting better (or worse).” How can we know this unless there is some standard beyond the world by which we can measure it? Likewise, statements like “Hitler was wrong” lose their intended significance if they are merely a matter of opinion or are culturally relative. But if Hitler was really (objectively) wrong, then there is a moral law beyond all of us by which we are all bound.” [1]

This argument has its basis in scriptures too:

12 For all who have sinned without the law will also perish without the law, and all who have sinned under the law will be judged by the law.13  For it is not the hearers of the law who are righteous before God, but the doers of the law who will be justified. 14 For when Gentiles, who do not have the law, by nature do what the law requires, they are a law to themselves, even though they do not have the law. 15 They show that the work of the law is written on their hearts, while their conscience also bears witness, and their conflicting thoughts accuse or even excuse them

Here Paul clearly mentions that we as human beings are absolutely without any kind of excuse, because the law is written on our hearts.

Let us take a quick look at some of the objections that have been raised against the moral law.

It is the culture that decides on the moral principles

The objector makes the point that culture defines for us the moral values and duties that we ought to follow. But this runs into a problem because two different cultures would have two absolutely different opinions on a particular matter. Like for example it was morally acceptable for Nazis to kill the Jews, but from the outset we clearly know that it is morally wrong. Culture cannot decide on this as it becomes subjective and objectivity is lost.

Happiness is the foundation of morality

Some would argue that those things that give us happiness are means to find out the objective morality. But then it is still faced with the same problem, because some people might find happiness in abusing little children or raping women or killing others. Therefore, such a foundation for building morality might lead us to absurdity.

They argue that atheists who don’t believe in God are leading a perfect moral life, sometimes better than theists. But they are missing the point, it is possible that we can be good without God, but it is impossible to be good without the existence of God. It is more of an ontological problem rather than epistemological one.

From the above arguments and three different objections we can make a fairly good case about the moral law. We can conclude that without God it is impossible to know or to defend the existence of objective moral values and duties. Without God we cannot know what is right or wrong. There’s no escape but to accept the existence of God.