The Old and New Testaments are what make up the Christian Bible. Many people have significant misunderstandings about how these two large books can be a part of the same religion. 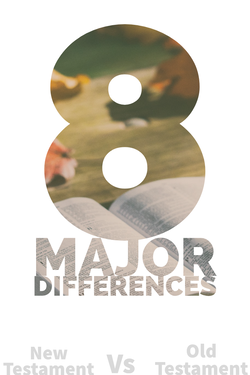 The New Testament is the second half of the Christian Bible. It was written by eyewitnesses to the life of Christ who wrote about events that occurred that were witnessed by other eyewitnesses. This took about 50 years to be written.

The Old Testament was repeatedly pointing towards the New Testament, towards Christ who could once and for all remove the taint of sin. The same word kaphar is used to describe the pitch that covered Noah’s ark. The entire ark inside and out had to be covered with pitch to keep it waterproof. And so we need the covering of the blood of Christ to save us from the wrath of God being poured out on mankind.

“For it is not possible that the blood of bulls and goats could take away sin.” Hebrews 10:4

“By that will we have been sanctified through the offering of the body of Jesus Christ once for all. And every priest stands ministering daily and offering repeatedly the same sacrifices, which can never take away sins. But this Man, after He had offered one sacrifice for sins forever, sat down at the right hand of God.” Hebrews 10:10-12

The Person of Christ

Christ is seen in the Old Testament in glimpses, called Theophany. He is mentioned in Genesis 16:7 as the Angel of the Lord. Later in Genesis 18:1 and Genesis 22:8 it is the Word of the Lord that revealed the prophesy to Abraham. Jesus is called the Word in John 1:1.

We see numerous prophecies concerning Christ scattered throughout the Old Testament too, especially in the book of Isaiah. Jesus is seen in every Old Testament book. He is the lamb without blemish mentioned in Exodus, our high priest mentioned in Leviticus, our kinsman redeemer seen in Ruth, our perfect king in 2 Chronicles, the one who was crucified but not left in Death as mentioned in Psalms etc.

Isaiah 7:14 “Therefore the Lord Himself shall give you a sign; Behold, a virgin shall conceive, and bear a son, and shall call His name Immanuel.”

Isaiah 53:3 “He was despised and rejected by mankind, a man of suffering, and familiar with pain. Like one from whom people hide their faces he was despised, and we held him in low esteem.”

“The Word became flesh and made his dwelling among us. We have seen his glory, the glory of the one and only Son, who came from the Father, full of grace and truth.” John 1:14

Ephesians 2:14-15 “For He Himself is our peace, who made both groups into one and broke down the barrier of the dividing wall, by abolishing in His flesh the enmity, which is the Law of commandments contained in ordinances, so that in Himself He might make the two into one new man, thus establishing peace.”

“Christ is the end of the law for righteousness to everyone who believes.” Romans 10:4

In the New Testament we see congregational prayer and worship and also individual. God wants us to worship Him with our entire being, with every breath we take, and in every action we make. Our entire purpose is to worship God.

Man’s purpose in both the Old and New Testament is clear: we were made for the glory of God. We bring God glory by worshipping Him, and by obeying His commands.

“The end of the matter; all has been heard. Fear God and keep His commandments, for this is the whole duty of man.” Ecclesiastes 12:13

Here are some Bible verses from the Old Testament:

“The Lord passed in front of Moses, calling out, “Yahweh! The Lord! The God of compassion and mercy!I am slow to anger and filled with unfailing love and faithfulness.  I lavish unfailing love to a thousand generations. I forgive iniquity, rebellion, and sin. But I do not excuse the guilty. I lay the sins of the parents upon their children and grandchildren; the entire family is affected—even children in the third and fourth generations.” Exodus 34:6-7

“You are a God ready to forgive, gracious and merciful, slow to anger and abounding in steadfast love, and did not forsake them.” Nehemiah 9:17

“The Lord is good, a stronghold in the day of trouble; he knows those who take refuge in Him” Nahum 1:7

Here are some Bible verses from the New Testament:

“Every good and perfect gift is from above, coming down from the Father of the heavenly lights, who does not change like shifting shadows.” James 1:17

“Jesus Christ is the same yesterday, today, and forever.” Hebrews 13:8

“But I’ll tell you whom to fear. Fear God, who has the power to kill you and then throw you into hell. Yes, he’s the one to fear.” Luke 12:5

“It is a terrible thing to fall into the hands of the living God.” Hebrews 10:31

In Genesis, Numbers, Isaiah, and 2 Samuel, we learn that the Messiah would be from the line of Abraham, and a descendant of Isaac and Jacob, from the Tribe of Judah, and an heir to King David’s throne. We see all of these prophecies fulfilled in Matthew, Luke, Hebrews and Romans.

In Jeremiah, we see that there would be a massacre of children at the Messiahs birthplace. This was fulfilled in Matthew chapter 2. In Psalms and Isaiah the Old Testament says that the Messiah would be rejected by His own people and in John we see that came true.

Covenants in the Old and New Testament

A covenant is a special type of promise. There were seven covenants made in the Bible. These fall under three categories: Conditional, Unconditional and General.

In the Old Testament there is the Mosaic Covenant. It was Conditional – meaning, if the descendants of Abraham were to obey God they would receive His blessing. The Adamic Covenant is a General Covenant. The command was to not eat from the Tree of the Knowledge of Good and Evil otherwise death would occur, but this covenant also included the future provision for the redemption of man. In the Noahic Covenant, another General Covenant, this was given as a promise that God would no longer destroy the world by a flood. The Abrahamic Covenant was an Unconditional Covenant given to Abraham by God whereas God would make Abrahams descendants a great nation and bless the whole world. Another Unconditional Covenant is the Palestinian Covenant. This one says that God promised to scatter the people of Israel if they disobeyed and then to bring them together again in their own land. This one was fulfilled twice. The Davidic Covenant is another Unconditional Covenant. This promises to bless David’s line with an everlasting kingdom – which was fulfilled in Christ.

In the New Testament we are given the New Covenant. This one is mentioned in Jeremiah and extended to all believers in Matthew and Hebrews. This promise says that God will forgive sin and have an intimate relationship with His people.

Next: The Unforgivable Sin