Jews and Christians are known as People of the Book. This is in reference to the Bible: God’s Holy Word. But how different is the Torah from the Bible? 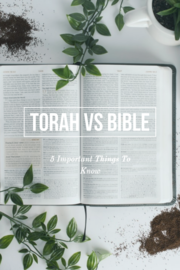 The Torah is part of the sacred Scriptures of the Jewish people. The Hebrew Bible, or Tanakh, is typically divided into three parts: the Torah, the Ketuviym (the Writings), and the Navi’im (the Prophets.) The Torah is their narrative history. It also explains how they are to worship God and conduct their lives as witnesses of Him.

Description of the five books of the Torah

The Torah includes the five books, as well as the oral traditions in the Talmud and the Midrash. The five books included are Genesis, Exodus, Leviticus, Numbers, and Deuteronomy. These five books were written by Moses. The Torah gives different names to these books: The Bereshiyt (In the Beginning), Shemot (Names), Vayiqra (And He Called), Bemidbar (In the Wilderness), and Devariym (Words.)

One major difference is that the Torah is handwritten on a scroll and is only read by a Rabbi during a ceremonial reading at specific times of the year. Whereas the Bible is printed and owned by Christians who are encouraged to study it daily.

The gospel of Jesus Christ

In Genesis, we can see that God is a Holy and Perfect God, the Creator of all things. And He demands holiness because He is perfectly Holy. All sin is enmity against God. Adam and Eve, the first people created, sinned. Their one sin was sufficient to cast them out of the Garden and to condemn them to Hell. But God made a covering for them and promised to make a way of forever cleansing them of their sin.

This same story was repeated throughout the entire Torah/Old Testament. Over and over the narrative tells the story about man’s inability to be perfect according to God’s standards, and God making a way to cover up the sins so that there could be fellowship, and an ever-present focus on the Messiah to come that would take away the sins of the world. This Messiah was prophesied about numerous times.

In the New Testament we can see Jesus. The Messiah. He came to earth. God, wrapped in flesh. He came and lived a perfect, sinless life. Then He was crucified. On the cross He bore our sins and God poured out His wrath upon His Son. He was the perfect sacrifice to take away the sins of the world. He died and three days later rose from the dead. It is by repenting of our sins and placing our faith in Jesus that we can be saved.

The Bible is the completion of the Torah. It is not in opposition to it. Let us read the Old Testament/Torah and marvel at the wonder that is Christ, our Messiah, the perfect sacrifice to take away the sins of the world.