The Talmud and the Torah are mistakenly used interchangeably by non-Jewish people. These are two of the most important words in all of Jewish history. Though they are both religious manuscripts, they are two totally different things. 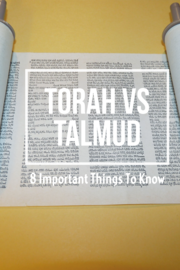 What is the Torah?

Torah is the Hebrew word for “instruction.”  Another word for this group of books is the Pentateuch. This differs from the Tanakh, which includes the other books that comprise the Christian Old Testament.

What is the Talmud?

The Jewish belief is that Moses received the Torah as a written text alongside a commentary: the Talmud. The Talmud is considered the oral traditions that coincide with the Torah. It is a depiction of the primary codification of the Jewish decrees. It explains the written texts of the Torah so that people know how to apply it to their lives.

When was the Torah written?

Moses was given the Torah directly from God at Mount Sinai and in the Tabernacle. God spoke His Word and Moses wrote it down. Most modern scholars say that the compilation of the Torah is the product of Redaction, or heavy editing done over the years by many ancient scribes and that the final editing occurred around 539 BC when Cyrus the Great conquered the Neo-Babylonian Empire.

When was the Talmud written?

Though the Jews consider this to be an oral commentary given from God. It was compiled by many Rabbi’s over a long period of time. The Mishnah was written down for the first time by Rabbi Yehuda HaNassi, or Rabbi Judah the Prince. This occurred just after the destruction of the Second Temple in 70 BC.

What does the Torah consist of?

The Torah is the 5 Books of Moses: Genesis, Exodus, Leviticus, Numbers, and Deuteronomy. It is, in essence, the Hebrew Bible. It contains 613 commandments and is the entire context of Jewish laws and traditions. The Jews do not call this the Old Testament, because for them, they do not have New Testament.

What does the Talmud consist of?

The Talmud is simply the oral traditions of the Torah. There are two Talmuds: The Babylonian Talmud (the most widely used) and the Jerusalem Talmud. There were other commentaries added called Gemara. All of these commentaries put together is called the Mishnah.

The Talmud on Jesus

Some people claim that the Talmud mentions Jesus. However, Yeshu was a very popular name in that time so there are many references to men named Yeshu. We can not say that every instance of that name belongs to Jesus. This is a very seriously debated subject. Some traditional Jews say that the Talmud never speaks of Jesus. While there are other Jewish scholars who say that He is mentioned in very blasphemous manners in a couple of verses.

Jesus and the Torah

Jesus is mentioned in the Torah and He is the completion of the Torah. The Torah promises a Messiah to come that will be the perfect, spotless lamb sacrifice for the sins of all of God’s people. Jesus is the “I Am” that Abraham rejoiced in. Jesus is who encouraged Moses in the Burning Bush and who brought the Jews out of Egypt. Jesus is the Rock in the Wilderness.

What you should know?

We should praise God for how He has revealed Himself to us progressively though His Word in the Bible and Torah. We can learn historically information from the Talmud, but we do not regard it as divinely authoritatively because it is not the Inspired Word of God. Most of all, let us Praise God for His fulfillment of His promises in sending us our Great Redeemer.