The Torah and the Bible are typically viewed as the same book. But are they? What are the differences? Why do we use two different names? If Jews and Christians are both called People of the Book, and both worship the same God, why do we have two different books? 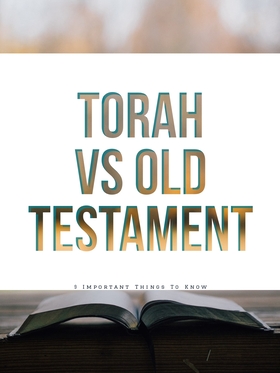 What is the Torah?

The Torah includes the five books that are written by Moses, as well as the oral traditions in the Talmud and the Midrash. These books are known to us as Genesis, Exodus, Leviticus, Numbers, and Deuteronomy. In the Torah they have different names: The Bereshiyt (In the Beginning), Shemot (Names), Vayiqra (And He Called), Bemidbar (In the Wilderness), and Devariym (Words.)

What is the Old Testament?

The Old Testament is ultimately the story of God revealing Himself to the Jewish people in preparation for the coming of the Messiah. Christians know the Messiah to be Jesus Christ, as He is revealed in the New Testament.

Who wrote the Torah?

The Torah is written in Hebrew only. The entire Torah was given to Moses while on Mount Sinai. Moses alone is the author of the Torah. The only exception to this are the very last eight verses of Deuteronomy, where Joshua wrote a description of the death and burial of Moses.

Who Wrote the Old Testament?

The Bible was originally written in Hebrew, Greek and Aramaic. There were many authors of the Old Testament. In spite of the fact that there was multiple authors spanning many many years and regions – the consistency is perfect. This is because the Old Testament is a part of the Bible, God’s Holy Word. Some of the authors include:

When was the Torah Written?

When was the Old Testament Written?

Moses wrote the first five books around 1500 BC. Over the next THOUSAND years the rest of the Old Testament would be compiled by its various authors. The Bible self attests that it is the very word of God. The consistency remains the same regardless of how long it took to compile. The entire Bible is pointing to Christ. The Old Testament prepares the way for Him and points us to Him, and the New Testament tells about His life, death, resurrection and how we are to conduct ourselves until He returns. No other religious book comes close to being as perfectly preserved and authenticated as the Bible.

The Torah is unique in that it is handwritten on a single scroll. It is only read by a Rabbi and only during a ceremonial reading at very specific times of the year. The Bible is a book that is printed. Christians often own multiple copies and are encouraged to read it every day.

Christ seen in the Torah

Christ is seen in the Torah. For the Jews, it is hard to see because like the New Testament says, there is a “veil over the eyes” of the unbeliever that can only be lifted by God alone. Christ is seen within the stories presented in the Torah.

Jesus walked in Eden – He covered them with skins. This was symbolic of Christ being our covering to cleanse us from our sin. He can be found in the Ark, in the Passover and in the Red Sea. Christ is seen within the Promised Land and even in the Exile and return of the Jews. Christ is more clearly seen in the ceremonial rituals and the sacrifices.

Christ seen in the other Old Testament books

Jesus Christ is the Messiah pointed out throughout all of the Old Testament. Every prophecy that was about the coming of the Messiah and what He would be like was perfectly fulfilled. The only prophecies not yet fulfilled are the ones that talk about when He will return to gather up His children.

Isaiah 11:1-9 “A shoot shall come out from the stump of Jesse, and a branch shall grow out of his roots. The spirit of the Lordshall rest upon him, the spirit of wisdom and understanding, the spirit of counsel and might, the spirit of knowledge and the fear of the Lord. His delight shall be in the fear of the Lord. He shall not judge by what his eyes see, or decide by what his ears hear. But with righteousness he shall judge the poor, and decide with equity for the meek of the earth; he shall strike the earth with the rod of his mouth, and with the breath of his lips he shall slay the wicked. Righteousness will be the belt around his waist, and faith-fullness the belt around his loins. The wolf shall live with the lamb, the leopard shall lie down with the kid, the calf and the lion and the fatling together and a little child shall lead them. The cow and the bear shall graze, their young shall lie down together, and the lion shall eat straw like the ox. The nursing child shall play over the hole of the asp, and the weaned child shall put its hand on the adder’s den. They will not hurt or destroy on all My holy mountain; for the earth will be full of the knowledge of the Lord as the waters cover the sea.”

Jeremiah 23:5-6 “The days are surely coming, says the Lord, when I will raise up for David a righteous branch, and he shall reign as king and deal wisely and shall execute justice and righteousness in the land. In his days Judah will be saved and Israel will dwell securely. And this is name by which he will be called: The Lord is our righteousness.”

Ezekiel 37:24-28 “My servant David shall be king over them; and they shall all have one shepherd. They shall follow My ordinances and be careful to observe My statutes. They shall live in the land that I gave to My servant Jacob, in which your ancestors lived; they and their children and their children’s children shall live there forever. And My servant David shall be their prince forever. I will make a covenant of peace with them; it will be an everlasting covenant with them; and I will bless them and multiply them, and I will set My sanctuary among them forevermore. My dwelling place shall be with them; I will be their G-d and they shall be My people. Then shall the nations know that I the L-rd, sanctifies Israel, when my sanctuary is among them forever-more.” Ezekiel 37:24-28

How marvelous and glorious that God would take the time to reveal Himself to us in such detailed ways that we see in the Old Testament. Praise God that He, who is so beyond us, so entirely OUTSIDE us, so perfectly Holy would reveal Himself so that we might know a fraction of who He is. He is our Messiah, who comes to take away the sins of the world. He is the only way to God the Father.

Next: Bible Verses About Flowers