Is The Trinity In The Bible?

Christians believe in one living and true God. The Creator of heaven and earth. He is eternal, unchanging, holy, and all-powerful.  He exists as three Persons but One Essence. The three Persons are God the Father, Jesus Christ the Son, and the Holy Spirit. All three are equal and eternal. Let’s find out is the Trinity in the Bible? 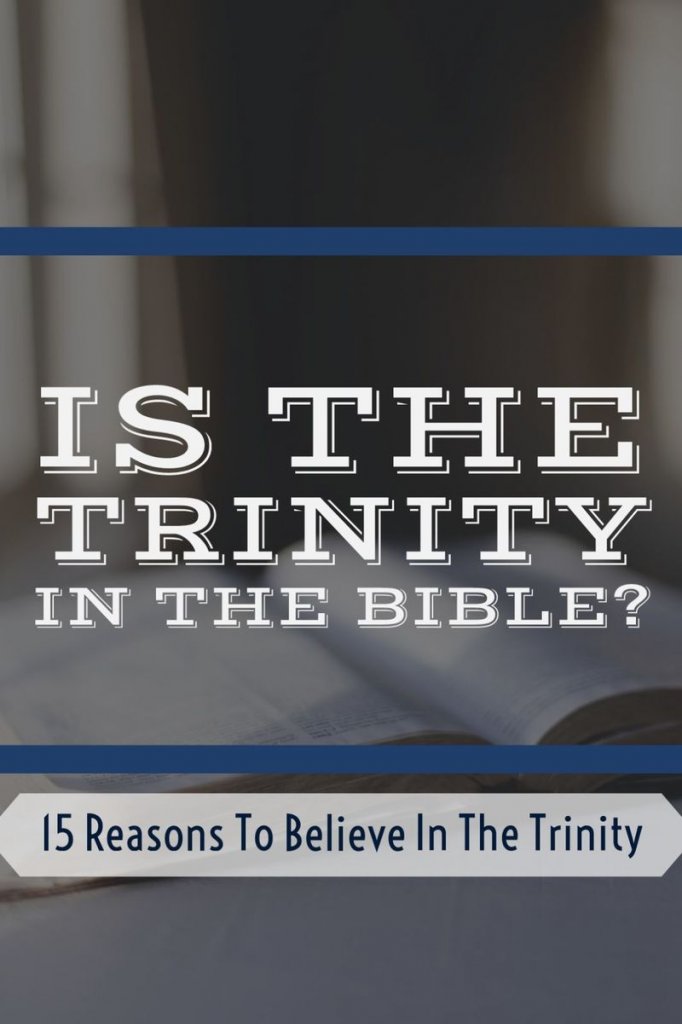 God’s love is seen in the Trinity.

In order for true agape love to be manifest, there has to be a plurality of persons involved. No other false god that people claim is loving can possibly be loving – you cannot be selflessly loving if you are by yourself. God the Father loves Jesus and they both love the Holy Spirit. There is true and perfect love between them. It is out of this love that Jesus submits to the Father and the Holy Spirit submits to them both. They do not seek their own glory, but the glory of one another.

We see evidence of the Trinity throughout Scripture.

In Genesis, we see the Bible opens with the first verse “In the beginning God…” The Hebrew word for God is Elohim. This is a plural word for El. We can see the concept of the Trinity in this word.

1 Peter 1:2 “According to the foreknowledge of God the Father, in the sanctification of the Spirit, for obedience to Jesus Christ and for sprinkling with his blood: May grace and peace be multiplied to you.”

Jesus says, “I and the Father are one.”

Jesus is claiming to be God, not merely a messenger of Him. He is showing that He is equal in power with God.

The Jews wanted to stone Jesus because He was claiming to be God.

The Jews thought that it was blasphemy to claim such a title. No prophet had ever before made such a claim. It wasn’t that the Jews misunderstood His claim of the Trinity. They understood, they just willfully rejected Him

John 10:33 “We are not stoning you for any good work,” they replied, “but for blasphemy, because you, a mere man, claim to be God.”

In Him dwells all the fullness of the Godhead.

Jesus is fully God. He is 100% God and 100% man. Jesus is 100% God just as God the Father in heaven is 100% God. In Colossians we see that Scripture is claiming that Jesus is completely God wrapped in flesh, with ALL the divine attributes of God. This statement proves that Jesus is the second person of the Trinity.

Colossians 2:9 “For in him the whole fullness of deity dwells bodily.”

Thomas doubted for a brief time. Yet, when he saw the wounds in the hands of Jesus, he fell at His feet and worshipped. It is overwhelmingly clear that Jesus Christ is indeed God wrapped in flesh.

Jesus allowed Himself to be worshiped.

There are numerous passages where Jesus was worshiped. He allowed it because He is God. And all glory He receives He gives to the Father.

Matthew 2:11 “And going into the house, they saw the child with Mary his mother, and they fell down and worshiped him. Then, opening their treasures, they offered him gifts, gold and frankincense and myrrh.”

Matthew 28:9 “And behold, Jesus met them and said, “Greetings!” And they came up and took hold of his feet and worshiped him.”

The Holy Spirit is called God

Scripture refers to the Holy Spirit as God. He is the third person of the Trinity who submits to both the Father and the Son.

Acts 5:3-4 “But Peter said, Ananias, why hath Satan filled thine heart to lie to the Holy Ghost, and to keep back part of the price of the land? Whiles it remained, was it not thine own? and after it was sold, was it not in thine own power? why hast thou conceived this thing in thine heart? thou hast not lied unto men, but unto God.”

There is one God

The Bible is clearly monotheistic. Scripture tells us that there is only one God. All three Persons of the Trinity are One in Essence, and they are all individually called God.

Ephesians 4:6 “One God and Father of all, who is over all and through all and in all.”

John 1:14 “The Word became flesh and made his dwelling among us. We have seen his glory, the glory of the one and only Son, who came from the Father, full of grace and truth.”

Ephesians 4:30 “And do not grieve the Holy Spirit of God, with whom you were sealed for the day of redemption.”

All three were involved in creation.

All of the Trinity was involved in creation. We can see that in Genesis 1. God said “Let there be light” and in John 1, Jesus is described as the Word, and also as the Light. All of which can also be seen in Colossians 1.

All three are omnipresent

Omnipresence means that God is everywhere at all times. This is demonstrated through the Trinity. This is not pantheism. God is everywhere, but He is very distinct. Even Jesus, due to His divine nature (which is distinct form His earthly body) is omnipresent.

Matthew 28:20 “Teaching them to observe all that I commanded you; and lo, I am with you always, even to the end of the age.”

All three are omniscient.

Just as God is omnipresent, He is omniscient. Omniscience means knowing all-things. In order for God to be perfectly sovereign over all of His creation, He has to be all-knowing. This characteristic is not restricted to any one person of the Godhead. All three are by their divine nature omniscient.

1 John 3:20 “For whenever our heart condemns us, God is greater than our heart, and he knows everything.”

Psalm 139:1-4 “O Lord, you have searched me and known me! You know when I sit down and when I rise up; you discern my thoughts from afar. You search out my path and my lying down and are acquainted with all my ways. Even before a word is on my tongue, behold, O Lord, you know it altogether.”

All three members of the Trinity are involved in the gospel.

The Trinity in its entirety is intricately involved in the Gospel. Our sin nature has separated us from God the Father. He is the perfect and just judge who has ruled that our treason against Him is worthy of eternity in Hell. He provided the perfect sacrifice on our behalf – the Son. Jesus bore our sins on His body on the cross so that we may be justified before God the Father. Now, as believers, the Holy Spirit indwells in us and sanctifies us.

Ephesians 1:3-6 “Blessed be the God and Father of our Lord Jesus Christ, who has blessed us in Christ with every spiritual blessing in the heavenly places, 4 even as he chose us in him before the foundation of the world, that we should be holy and blameless before him. In love 5 he predestined us for adoption to himself as sons through Jesus Christ, according to the purpose of his will, 6 to the praise of his glorious grace, with which he has blessed us in the Beloved.”

Ephesians 1:7-12 “In him we have redemption through his blood, the forgiveness of our trespasses, according to the riches of his grace, 8 which he lavished upon us, in all wisdom and insight 9 making known to us the mystery of his will, according to his purpose, which he set forth in Christ10 as a plan for the fullness of time, to unite all things in him, things in heaven and things on earth. 11 In him we have obtained an inheritance, having been predestined according to the purpose of him who works all things according to the counsel of his will, 12 so that we who were the first to hope in Christ might be to the praise of his glory.”

Ephesians 1:13-14 “In him you also, when you heard the word of truth, the gospel of your salvation, and believed in him, were sealed with the promised Holy Spirit, 14 who is the guarantee of our inheritance until we acquire possession of it, to the praise of his glory.”

We see the Trinity in the resurrection

Acts 5:30 “The God of our fathers raised Jesus, whom you killed by hanging him on a tree.”

John 2:19 “Jesus answered them, “Destroy this temple, and in three days I will raise it up.”

The Trinity is mentioned in the Apostles’ Creed.

The early Church believed in the doctrine of the Trinity. We can see each persons of the Trinity expressed in one of the churches early documents, the Apostles Creed.

I believe in God, the Father almighty,
creator of heaven and earth.
I believe in Jesus Christ, his only Son, our Lord.
He was conceived by the power of the Holy Spirit
and born of the virgin Mary.
He suffered under Pontius Pilate,
was crucified, died, and was buried.
He descended to the dead.
On the third day he rose again.
He ascended into heaven,
and is seated at the right hand of the Father.
He will come again to judge the living and the dead.
I believe in the Holy Spirit,
the holy universal Church,
the communion of the saints,
the forgiveness of sins,
the resurrection of the body,
and the life everlasting. Amen.

Why is the Trinity important? Can you be a Christian and deny the Trinity?

The Trinity is a concept that is crucial to Christianity. God is important and therefore the Trinity is important.The Trinity is seen in the gospel and Jesus has to be fully God to save us. You cannot be a Christian and deny the Trinity. Augustine said, “in no other subject is error more dangerous, or injury more laborious, or the discovery of truth more profitable.” This doctrine is a concept that is beyond our ability to fully understand and grasp, but we know it in part.

Previous: Praying For Others