Understanding the Biblical creation account is vitally important. Yet, many churches regard this as a minor issue – one that people can agree to disagree about. However, if you claim that the Biblical creation narrative is not 100% true – it leaves room to doubt the rest of Scripture. We know that all Scripture is God-breathed. Even the account of creation. 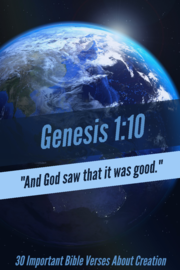 The Bible is clear that in six days, God created everything. He created the universe, earth, plants, animals, and people. If we believe God is who He says He is, and if we believe that the Bible is the ultimate authority, then we have to believe in a literal six-day creation.

1. Hebrews 1:2 “In these last days has spoken to us in His Son, whom He appointed heir of all things, through whom also He made the world.”

2. Psalm 33:6 “By the word of the Lord the heavens were made, and by the breath of His mouth all their host.”

3. Colossians 1:15 “He is the image of the invisible God, the firstborn of all creation.”

God revealed His glory in creation. It is revealed in the intricacies of creation, the manner at which it was created, etc. Christ is the firstborn of every creature and the firstborn from the dead.  The universe belongs to God, because He made it. He rules as Lord over it. 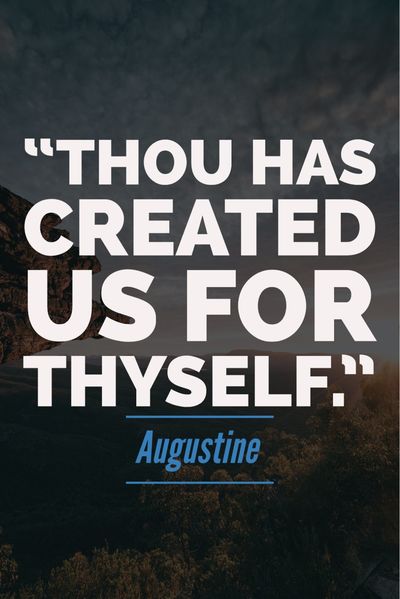 4. Romans 1:20 “For his invisible attributes, namely, his eternal power and divine nature, have been clearly perceived, ever since the creation of the world, in the things that have been made. So they are without excuse.”

5. Psalm 19:1 “The heavens are telling of the glory of God; and their expanse is declaring the work of His hands.”

7. Psalm 104:1-4 “Bless the Lord, O my soul! O Lord my God, You are very great;
You are clothed with splendor and majesty, covering Yourself with light as with a cloak, stretching out heaven like a tent curtain. He lays the beams of His upper chambers in the waters; He makes the clouds His chariot; He walks upon the wings of the wind; He makes the winds His messengers, flaming fire His ministers.”

The Trinity in creation

In the first chapter of Genesis we can see that the entire Trinity was an active participant in the creation of the world. “In the beginning God.” This word for God is Elohim, which is a plural version of the word El, for God. This indicates that ALL THREE members of the Trinity were present in eternity past, and ALL THREE were active participants in creating all things.

God loves all of His creation in the general sense as the Creator. This is different than the special love He has for His people. God shows His love to all people by providing rain and other blessings.

12. Romans 5:8 “but God shows his love for us in that while we were still sinners, Christ died for us.”

13. Ephesians 2:4-5 “But God, being rich in mercy, because of the great love with which he loved us,5 even when we were dead in our trespasses, made us alive together with Christ—by grace you have been saved.”

14. 1 John 4:9-11 “In this the love of God was made manifest among us, that God sent his only Son into the world, so that we might live through him. 10 In this is love, not that we have loved God but that he loved us and sent his Son to be the propitiation for our sins. 11 Beloved, if God so loved us, we also ought to love one another.”

All things worship God. Even the birds in the air worship Him by doing exactly what birds are designed to do. Since God’s glory is shown in His creation – all things are worshipping God.

16. Psalm 19:1 “The heavens declare the glory of God, and the sky above proclaims his handiwork.”

17. Revelation 5:13 “And I heard every creature in heaven and on earth and under the earth and in the sea, and all that is in them, saying, “To him who sits on the throne and to the Lamb be blessing and honor and glory and might forever and ever!”

18. Revelation 4:11 “Worthy are you, our Lord and God, to receive glory and honor and power, for you created all things, and by your will they existed and were created.”

19. Nehemiah 9:6 “You are the Lord, you alone. You have made heaven, the heaven of heavens, with all their host, the earth and all that is on it, the seas and all that is in them; and you preserve all of them; and the host of heaven worships you.”

God’s involvement in His creation

God’s special love for His people was set upon them before the foundations of the earth were laid. This special love is a redeeming love. Even one sin committed by man is treason against a holy and just God. So our righteous Judge declares us guilty. The only reasonable punishment for sins against Him is eternity in Hell. But because He chose us, because He decided to love us with a redeeming love, He sent His Son, Jesus Christ, to bear our sins so that we can be reconciled to Him. It was Christ who bore the wrath of God on our behalf. By repenting of our sins and trusting Him we can spend eternity with Him.

23. Deuteronomy 13:5 “But that prophet or that dreamer of dreams shall be put to death, because he has taught rebellion against the Lord your God, who brought you out of the land of Egypt and redeemed you out of the house of slavery, to make you leave the way in which the Lord your God commanded you to walk. So you shall purge the evil from your midst.”

24. Deuteronomy 9:26 “And I prayed to the Lord, ‘O Lord God, do not destroy your people and your heritage, whom you have redeemed through your greatness, whom you have brought out of Egypt with a mighty hand.”

26. Ephesians 1:7 “In him we have redemption through his blood, the forgiveness of our trespasses, according to the riches of his grace.”

Being a new creation in Christ

When we get saved, we are given a new heart with new desires. Upon the moment of salvation we are made into a new creature.

27. 2 Corinthians 5:17-21 “Therefore, if anyone is in Christ, he is a new creation. The old has passed away; behold, the new has come. 18 All this is from God, who through Christ reconciled us to himself and gave us the ministry of reconciliation; 19 that is, in Christ God was reconciling the world to himself, not counting their trespasses against them, and entrusting to us the message of reconciliation. 20 Therefore, we are ambassadors for Christ, God making his appeal through us. We implore you on behalf of Christ, be reconciled to God. 21 For our sake he made him to be sin who knew no sin, so that in him we might become the righteousness of God.”

28. Galatians 2:20 “I have been crucified with Christ. It is no longer I who live, but Christ who lives in me. And the life I now live in the flesh I live by faith in the Son of God, who loved me and gave himself for me.”

29. Isaiah 43:18-19 “Remember not the former things, nor consider the things of old. Behold, I am doing a new thing; now it springs forth, do you not perceive it? I will make a way in the wilderness and rivers in the desert”

30. Colossians 3:9-10 “Do not lie to one another, seeing that you have put off the old self with its practices 10 and have put on the new self, which is being renewed in knowledge after the image of its creator.”

Next: Does God Change His Mind In The Bible?