In many circles, the doctrine of election is the subject matter held in much contested debate. So let’s take a look at what the Bible says. 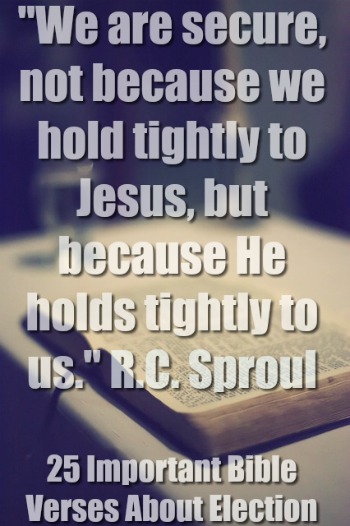 Is the doctrine of election biblical?

John Macarthur says, “The doctrine of election simply means that God, uninfluenced and before creation, predetermined certain people to be saved.”

Unconditional election is another word for this doctrine. The Bible teaches that God chooses which sinners will be saved and that it is an act completed by God alone. This doctrine over the choice is called election because the Bible often refers to believers as “the Elect”, or eklektos.  There are several verses where the word eklektos is used.

1) Romans 8:33 “Who will bring a charge against God’s elect? God is the one who justifies.”

2) Titus 1:1 “Paul, a bondservant of God and an apostle of Jesus Christ, for the faith of those chosen of God and the knowledge of the truth which is according to godliness.”

3) Colossians 3:12 “So, as those who have been chosen of God, holy and beloved, put on a heart of compassion, kindness, humility, gentleness and patience.”

4) 1 Timothy 5:21 “I solemnly charge you in the presence of God and of Christ Jesus and of His chosen angels, to maintain these principles without bias, doing nothing in a spirit of partiality.”

Does God choose who to be saved?

The Bible is clear, God Himself chose who would be saved. The election is His choice, and it was predestined at a very specific time in history – “before the foundations of the world.”

God did not look through the corridor of time to see who would eventually choose Him – that is impossible with God being All Knowing. It is by God’s sovereignty that He chose. It was a choice completely independent of any human will or intervention. If God looked down the corridor of time, if God’s decision was based on man’s decision, that would be God choosing in a passive sense, and man choosing in the active sense. But Scripture uses active form of the verb in Greek, prognosis, or “foreknowledge”. It is the concept of a very deliberate choice.

5) Ephesians 1:4 “Just as He chose us in Him before the foundation of the world, that we would be holy and blameless before Him.”

6) 1 Peter 1:2 “According to the foreknowledge of God the Father, by the sanctifying work of the Spirit, to obey Jesus Christ and be sprinkled with His blood: May grace and peace be yours in the fullest measure.”

7) 1 Peter 1:20 “For He was foreknown before the foundation of the world, but has appeared in these last times for the sake of you.”

8) John 15:16 “You did not choose Me but I chose you, and appointed you that you would go and bear fruit, and that your fruit would remain, so that whatever you ask of the Father in My name He may give to you.”

9) John 1:12-13 “But as many as received Him, to them He gave the right to become children of God, even to those who believe in His name, who were born, not of blood nor of the will of the flesh nor of the will of man, but of God.”

10) 2 Thessalonians 2:13 “But we should always give thanks to God for you, brethren beloved by the Lord, because God has chosen you from the beginning for salvation through sanctification by the Spirit and faith in the truth.”

Who are the elect of God?

The elect are the sinners who God has predestined to respond to the Gospel. Each and every person born is born as a sinner. Completely dead in our sins. A dead man cannot choose to be alive – nor can a spiritually dead man choose to be reborn in Christ. Our sin separates us from God. Our sin places us at enmity against God, it is an act of treason. God is a righteous and just judge, and He has declared all of us sinners as guilty of this treason against His Holy Name. Our punishment is a tormented eternity in Hell, separated from God. Christ’s sacrifice on the cross is the only possible payment worthy to pay the fine for our crime. He paid the debt owed. By God’s grace, we can have saving faith to repent of our sins and turn to Christ, trusting Him for our salvation.

RC Sproul said, “Calvinism does not teach and never has taught that God bring people kicking and screaming into the Kingdom or has ever excluded anyone who wanted to be there. Remember that the cardinal point of the Reformed doctrine of predestination rests on the biblical teaching of man’s spiritual death. Natural man does not want Christ. He will only want Christ if God plants a desire for Christ in his heart. Once that desire is planted, those who come to Christ do not come kicking and screaming against their wills. They come because they want to come. They now desire Jesus. They rush to the Savior. The whole point of irresistible grace is that rebirth quickens someone to spiritual life in such a way that Jesus is now seen in His irresistible sweetness. Jesus is irresistible to those who have been made alive to the things of God. Every soul whose heart beats with the life of God within it longs for the living Christ. All whom the Father gives to Christ come to Christ (John 6:37).”

12) Romans 5:12 “Therefore, just as through one man sin entered into the world, and death through sin, and so death spread to all men, because all sinned.”

14) Romans 5:8 “But God demonstrates His own love toward us, in that while we were yet sinners, Christ died for us.”

15) Romans 6:23 “For the wages of sin is death, but the free gift of God is eternal life in Christ Jesus our Lord.”

16) Romans 10:9-10 “that if you confess with your mouth Jesus as Lord, and believe in your heart that God raised Him from the dead, you will be saved; for with the heart a person believes, resulting in righteousness, and with the mouth he confesses, resulting in salvation.”

Being predestined for eternal life does not negate the responsibility to respond to the gospel in repentance. God out of His mercy and grace provides the saving faith necessary. Our salvation is not because of anything we do – it is caused by something God did. God was being God – totally in control of everything. Nothing is outside of His realm of authority or knowledge. If it was – He wouldn’t then be All Knowing or All Powerful.

“But how can a loving God do something so unfair” you may ask? God is God and you are not.

You don’t want fair. Fair would send us all to hell. We have all committed a crime against the Holy Creator of the Universe – our crime is punishable by eternal torment. A fair, just judge would send any criminal to his right punishment. We do not want fair. We want mercy. And God is allowed to be merciful on who He chooses.

18) John 6:37 “All that the Father gives Me will come to Me, and the one who comes to Me I will certainly not cast out.”

19) Acts 13:48 “When the Gentiles heard this, they began rejoicing and glorifying the word of the Lord; and as many as had been appointed to eternal life believed.”

20) Ephesians 2:8 “For by grace you have been saved through faith; and that not of yourselves, it is the gift of God”

22) Ephesians 1:11-12 “also we have obtained an inheritance, having been predestined according to His purpose who works all things after the counsel of His will, to the end that we who were the first to hope in Christ would be to the praise of His glory.”

If God chooses who will go to heaven, and it is totally His doing, what is the point in evangelism? We go out and evangelize, first and foremost, because we are commanded to by Christ. Secondly, we do not know when in a person’s life God has predestined for him to come to repentance and place his trust in Christ. God uses His people for His purposes – even to such purposes as bringing His lost sheep home.

23) Matthew 28:16-20 “But the eleven disciples proceeded to Galilee, to the mountain which Jesus had designated. When they saw Him, they worshiped Him; but some were doubtful. And Jesus came up and spoke to them, saying, “All authority has been given to Me in heaven and on earth. Go therefore and make disciples of all the nations, baptizing them in the name of the Father and the Son and the Holy Spirit, teaching them to observe all that I commanded you; and lo, I am with you always, even to the end of the age.””

God is the Creator of All Things. He created the universe exactly like He wanted to. He has sovereignly permitted everything in human history. Everything He has done is according to His Redemptive Plan. We can see in the Old Testament God showing us a mirror image of His plan in how He chose the Jews to be His people. And it is all for His Glory. In order for God to be totally glorified, all of His attributes must be proclaimed. His mercy has to be proclaimed – and there has to be those whom He is not merciful on in order for there to be some on whom He has mercy.

25) Deuteronomy 7:6 “For you are a holy people to the Lord your God; the Lord your God has chosen you to be a people for His own possession out of all the peoples who are on the face of the earth.”

God chose His people, and He has every right to as our Creator. His glory is revealed in His election as well as His justice. Let us praise God for His mercy!