Who Is John Calvin? 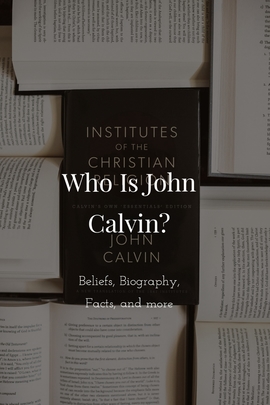 Who was John Calvin?

On July 10, 1509 in Noyon, Picardy France, John Calvin was born. His parents were Gerard and Jeanne Cauvin. His father Gerard was a financial administrator for the Roman Catholic bishop of the Noyon diocese. Because of his father’s teaching he quickly developed a love for scholasticism.

In 1523 he attended the University of Paris, which was the most prestigious university at the time, and took a position as chaplain of Noyon Cathedral. He fell into a conflict with the bishop and left to the Universities of Orleans and then Bourges to study the Law. But tragedy struck hard the year that his father died in 1531. Calvin buried his father and then attended the College de France so that he could study classical literature. While attending there, he read Erasmus and Martin Luther and became a great admirer. It was through the writings of Martin Luther that John Calvin became converted to being a true follower of Christ.

Shortly after the conversion of Calvin he met Nicolas Cop, who was a rector of the University of Paris and he preached the opening address one winter at the university. Many theologians believe that John Calvin assisted Nicolas with the writing of the address. It was a very bold attack on the leading theologians of the day for their heretical views. This caused quite an uproar. So much so that John Calvin had to leave Paris and hide at the estate of Louis du Tillet to keep from being arrested. Louis had a library full of the great Reformers. John Calvin spent time studying Augustine and many of the early Church Fathers and became a self-taught theologian.

In 1534, John Calvin moved to Switzerland, which was then a safe place for Protestants. It was there in Switzerland that he wrote the Institutes of the Christian Religion – he began writing this only one year after his conversion. He later moved to Germany and then to Geneva. Later tensions rose in Geneva and he had to leave for Strasbourg. He studied, wrote, and preached boldly wherever he went.

The beliefs of Calvin were centered around the Sovereignty of God. John Calvin taught that God had absolute power and absolute supremacy over all that He has created. God is so holy and so worthy that He should be praised and known. So man was created so that all of God’s attributes might be displayed, known, and praised. John Calvin taught that man was completely sinful – because the Bible says so. He also taught that man can only reach God through faith in Christ alone. This too is in line with what the Bible teaches. Jesus said, “No man can come to the Father but through Me.” The basic beliefs found in the Bible that were clearly taught by John Calvin are summed up in the acronym TULIP.

Total Depravity: This doctrine teaches that sin has totally corrupted all parts of man. Man’s heart, mind, will, emotions etc. The Bible teaches us that it is because we are corrupt that we cannot on our own volition seek God and that man is a slave to sin. In order for man to come to God, He must be drawn by the Holy Spirit. (Mark 7:21-23, Jeremiah 17:9, Romans 6:20, Romans 3:10-12, 1 Corinthians 2:14, Ephesians 2:15, Ephesians 2:3.)

Unconditional Election: This beautiful Biblical teaching shows us that God does not base His election on anything that He sees in the individual. It is without any merit on who I am or what I have done. He has chosen out of the kind intention of His will. Just as He chose Israel to be His people, He has chosen those who will one day believe in Him for their salvation. (Ephesians 1:4-8, Romans 9:11, Romans 9:15, Romans 9:21)

Limited Atonement: This is the teaching that God only died for those whom He has predestined or elected. Though Jesus’s sacrifice was sufficient for saving all, it was not efficacious for all. Jesus only bore on His body the sins of the elect. He died for the sheep, not the goats. In John we see that Jesus was in prayer for all of those that are given to Him, and not for the entire world. In Isaiah we can see that the crucifixion was for many people but not all people. (Matthew 26:28, John 10:11, John 10:15, Matthew 25:32-33, Isaiah 53:12)

Irresistible Grace: This means that when God calls someone to salvation that they cannot resist His call. The Holy Spirit only draws those who have been chosen by God. This is an internal drawing. God alone appoints people to believe, all faith is from God alone. (Romans 9:16, Philippians 2:12-13, John 6:28-29, Acts 13:48, John 1:12-13, John 6:37)

Perseverance of the Saints: This doctrine teaches that man cannot lose his salvation. Since salvation is a work of God, and a gift from God, man cannot do anything to get rid of it. God the Father has chosen who will be saved, God the Son will redeem them by His work on the cross, and the Holy Spirit draws them to salvation and seals them. God has promised to complete the work of salvation that He has started – and the work of salvation can’t be completed until they reach heaven. (John 10:27-28, John 6:47, Romans 8:1, 1 Corinthians 10:13, Philippians 1:6.)

The influence of John Calvin

John Calvin is one of the greatest theologians that have ever lived. His theological works, sermons, letters, Bible commentaries, and treatises are one of the primary agents of the Protestant Reformation. His teachings have sparked not only one of the greatest movements in Christian history but also tremendous controversy.

“God preordained, for His own glory and display of His attributes of mercy and justice, a part of the human race, without any merit of their own, to eternal salvation, and another part, in just punishment of their sin, to eternal damnation.” John Calvin

Since God is all-knowing, and since He has created all things, He has absolute power and complete supremacy over all of His creation. It was solely for His own glory and so that His attributes could be displayed. It was not due to any goodness or merit of mankind.

Calvinism was not started by John Calvin. It is merely the movement named after him. This movement is a return to Biblical truth. Calvinism holds a very high view of Scripture and seeks to derive all of it’s theological concepts from Scripture alone. Calvinism teaches that is completely sovereign over all of His creation. God is perfectly able to do whatever He wishes with His creation.

Calvinism does highly promote evangelism and missions – for we do not know when the elect will trust Christ as their Savior, nor do we know the instruments God chooses to make His good news known.

There is a tremendous amount of misunderstanding about what Calvinism is, and who John Calvin was. Hopefully this article has clarified some of the misunderstanding that is associated with it.

Previous: What Is Prayer Quotes

Next: Goodness Of God