One of the most debated issues amongst evangelicals is the issue of predestination. A lot of debate arises from a misunderstanding of what this doctrine means. 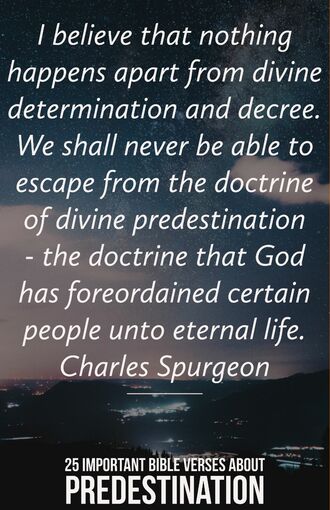 Predestination refers to God choosing who would inherit eternal life in Glory. Every professing Christian believes in predestination to some degree.  The issue is when did it occur? Did predestination happen before the fall or after? Let’s take a look at the doctrine of election!

1) “You did not choose Me but I chose you, and appointed you that you would go and bear fruit, and that your fruit would remain, so that whatever you ask of the Father in My name He may give to you.” John 15:6

2) “Knowing, brethren beloved by God, His choice of you,” 1 Thessalonians 1:4

3) “Before I formed you in the womb I knew you, and before you were born I consecrated you; I have appointed you a prophet to the nations.” Jeremiah 1:5

4) “So, as those who have been chosen of God, holy and beloved, put on a heart of compassion, kindness, humility, gentleness and patience; bearing with one another, and forgiving each other, whoever has a complaint against anyone; just as the Lord forgave you, so also should you.” Colossians 3:12-13

5) “Paul, a bondservant of God and an apostle of Jesus Christ, for the faith of those chosen of God and the knowledge of the truth which is according to godliness.” Titus 1:1

6) “The Lord has made everything for its own purpose, even the wicked for the day of evil.” Proverbs 16:4

We did not choose Him. It pleased God to choose us. It was according to His kindness. God choosing us brings glory to His name because of His unfailing mercy and grace. The Bible is clear, God chose us. He personally set us apart from the rest of His created people. God chose those who would be His and passed over the rest. God alone is responsible for this process. Not man. If man had any part in this choice, then it would rob God of some of the glory.

Frequently in scripture the term “elect” is used to describe those who have been predestined. It means set apart or chosen. God didn’t have the author of these New Testament book use the term Church or Christian or Believer. He chose to use the word elect.

Again, only God can justify. Only God can bring about our salvation. God chose us before the foundation of the world, and gave us mercy so that through His grace we could accept Him as Savior.

7) “Who has saved us and called us with a holy calling, not according to our works, but according to His own purpose and grace which was granted us in Christ Jesus from all eternity” 2 Timothy 1:9

8) “Blessed be the God and Father of our Lord Jesus Christ, who has blessed us with every spiritual blessing in the heavenly places in Christ, just as He chose us in Him before the foundation of the world, that we would be holy and blameless before Him.”  Ephesians 1:3

9) “But when God, who had set me apart even from my mother’s womb and called me through His grace, was pleased to reveal His Son in me so that I might preach Him among the Gentiles.” Galatians 1:15-16

10) “In love He predestined us to adoption as sons through Jesus Christ to Himself, according to the kind intention of His will, to the praise of the glory of His grace, which He freely bestowed on us in the Beloved.”  Ephesians 1:4

11) “And He will send forth His angels with a great trumpet and they will gather together His elect from the four winds, from one end of the sky to the other.”  Matthew 24:31

12) “And the Lord said, “Hear what the unrighteous judge said;  now, will not God bring about justice for His elect who cry to Him day and night, and will He delay long over them?” Luke 18:6-7

14)  “But we should always give thanks to God for you, brethren beloved by the Lord, because God has chosen you from the beginning for salvation through sanctification by the Spirit and faith in the truth.” 2 Thessalonians 2:13

15) “For you are a holy people to the Lord your God; the Lord your God has chosen you to be a people for His own possession out of all the peoples who are on the face of the earth.” Deuteronomy 7:7

17) “Knowing that you were not redeemed with perishable things like silver or gold from your futile way of life inherited from your forefathers, but with precious blood, as of a lamb unblemished and spotless, the blood of Christ.  For He was foreknown before the foundation of the world.” 1 Peter 1:18-20

18) “Also we have obtained an inheritance, having been predestined according to His purpose who works all things after the counsel of His will, to the end that we who were the first to hope in Christ would be to the praise of His glory.” Ephesians 1:11-12

The chosen were selected according to the foreknowledge of God. Foreknowledge is another word for Prognosis. In Greek we see the word prognsis or proginosko. It means ‘a predetermined choice’ or ‘to know before’. It is a deliberate, considered choice.

The Monergism perspective (also known as Calvinism or the Augustinian view) says that God chose us without any outside influence. God alone determined who would have saving faith.

Synergism (also known as Arminianism, or Pelagianism) says that God chose man based on the choice that man would make in the future. Synergism says that God and man work together for salvation.

Because God is completely sovereign, He alone chose those to whom would be saved. He is completely all knowing, all powerful. If God looked through the tunnel of time and saw which men would choose Him, as the synergists claim, then God is basing His choice upon man’s decision. That is not entirely based upon the sovereignty of God. God can not set aside His sovereignty, that would be outside of His nature. That view also would imply that there was a time before God looked down the proverbial tunnel that He didn’t know who would choose Him. This is impossible if God is omniscient.

19) “To those who reside as aliens, scattered throughout Pontus, Galatia, Cappadocia, Asia, and Bithynia, who are chosen according to the foreknowledge of God the Father, by the sanctifying work of the Spirit, to obey Jesus Christ and be sprinkled with His blood: May grace and peace be yours in the fullest measure.” 1 Peter 1:1-2

21) “This Man, delivered over by the predetermined plan and foreknowledge of God, you nailed to a cross by the hands of godless men and put Him to death.” Acts 2:23

How can I know if I am one of the elect?

We shouldn’t worry about if we are elect or not. The real question is, do you have a personal relationship with Christ? Have you put your faith in Christ alone? God has given the elect the grace to enable them to act in obedience in repentance and faith and submit to Jesus as Lord and Savior.  So how do you know if you are one of the elect? Have you been saved? If so – congratulations! You are one of the elect!

There is a lot of misunderstanding about this doctrine. Some claim that predestination is when God chooses who will go to heaven – whether they want to or not. Or worse, that God will refuse someone into this elect group even if they really want to be and believe in Jesus. This simply isn’t true. If God has chosen you – you will want to get saved at some point in your life.

Many people cry out – this is not fair! Why does God choose SOME and not ALL? Then that is universalism, and it’s heretical. Why did God pass over some and actively choose others? You don’t want fair. You want mercy. It is only by His mercy that we are not all cast into hell – for we are ALL guilty of sin. Mercy is not mercy if it is forced. There is no way we can completely wrap our brain around this doctrine completely. Just like we can’t completely wrap our brain around the concept of the Trinity. And that’s ok. We can rejoice that God is indeed equally glorified by exalting His mercy just as He is His wrath.

22) “That if you confess with your mouth Jesus as Lord, and believe in your heart that God raised Him from the dead, you will be saved; for with the heart a person believes, resulting in righteousness, and with the mouth he confesses, resulting in salvation.  For the Scripture says, “Whoever believes in Him will not be disappointed.” For there is no distinction between Jew and Greek; for the same Lord is Lord of all, abounding in riches for all who call on Him; for ‘Whoever will call on the name of the Lord will be saved.” Romans 10:9-13

25) “I write these things to you who believe in the name of the Son of God so that you may know that you have eternal life.” 1 John 5:13