Bible verses about justification by faith

Unlike what Roman Catholicism teaches, Christians are justified by faith alone. No works! You cannot work your way into Heaven. We are not saved by the law, but Jesus alone. 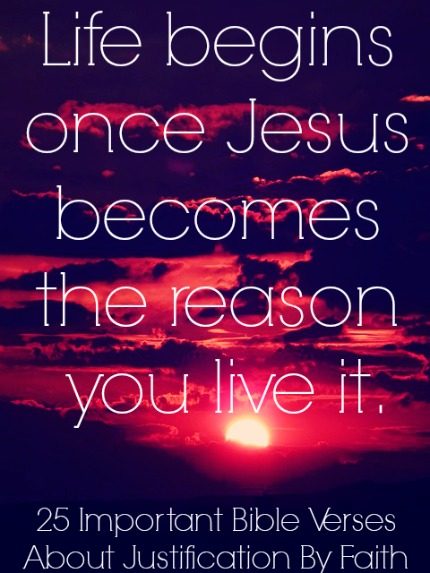 Cursed is the one who tries to work out his own salvation. Many Catholics try to counter argue and say that you’re teaching that a person can be a Christian and live like the devil. Here is the thing that many people forget.

We forget repentance and the doctrine of regeneration. When someone is truly saved by faith they will not want to live in a continuous lifestyle of sin. They will desire to obey God.

Catholicism teaches that you have to work for your salvation. Salvation is by faith, baptism, and obeying the commandments.

Christianity teaches that evidence of true faith in Christ will result in good works. We know that our good deeds can’t save us. Justification is by grace through faith in Christ.

God requires perfection. If you say I have to believe in Christ and obey the commandments to be saved. You are on your way to hell. If you fail at one point you’re not obeying.

Lay down that burden. We are not good enough only Christ is. Christ became your perfection. Stop saying I have to do this and this. No you can’t! Christ did it for you. There is no way after reading these Scriptures that any person can believe that salvation is by faith and deeds.

“Any church which puts in the place of justification by faith in Christ another method of salvation is a harlot church.” Charles Spurgeon

“Saving faith is an immediate relation to Christ, accepting, receiving, resting upon Him alone, for justification, sanctification, and eternal life by virtue of God’s grace.” Charles Spurgeon

“It is entirely by the intervention of Christ’s righteousness that we obtain justification before God. This is equivalent to saying that man is not just in himself, but that the righteousness of Christ is communicated to him by imputation, while he is strictly deserving of punishment.” John Calvin

1. Galatians 2:21 I do not treat the grace of God as meaningless. For if keeping the law could make us right with God, then there was no need for Christ to die.

3. Romans 5:1-2 Therefore, since we have been declared righteous by faith, we have peace with God through our Lord Jesus Christ, through whom we have also obtained access by faith into this grace in which we stand, and we rejoice in the hope of God’s glory.

4. Romans 4:24-25 but also for our sake, to whom it will be credited, those who believe in the one who raised Jesus our Lord from the dead. He was given over because of our transgressions and was raised for the sake of our justification.

5. Ephesians 2:8-10 For by grace you have been saved through faith; and that not of yourselves, it is the gift of God; not as a result of works, so that no one may boast. For we are His workmanship, created in Christ Jesus for good works, which God prepared beforehand so that we would walk in them.

6. Romans 3:22 the righteousness of God through faith in Jesus Christ for all who believe. For there is no distinction.

8. Romans 5:15-16 But there is a great difference between Adam’s sin and God’s gracious gift. For the sin of this one man, Adam, brought death to many. But even greater is God’s wonderful grace and his gift of forgiveness to many through this other man, Jesus Christ. And the result of God’s gracious gift is very different from the result of that one man’s sin. For Adam’s sin led to condemnation, but God’s free gift leads to our being made right with God, even though we are guilty of many sins.

Jesus is the only way. Only Christ!

11. Romans 10:9-11 because, if you confess with your mouth that Jesus is Lord and believe in your heart that God raised him from the dead, you will be saved. For with the heart one believes and is justified, and with the mouth one confesses and is saved. For the Scripture says, “Everyone who believes in him will not be put to shame.”

12. John 3:16 For God so loved the world, that he gave his only begotten Son, that whosoever believeth in him should not perish, but have everlasting life.

The false teachings of the Catholic Church.

CCC 2010, ” . . .Moved by the Holy Spirit and by charity, (we can then merit for ourselves and for others the graces needed for our sanctification), for the increase of grace and charity, and (for the attainment of eternal life).

CCC 2068 The Council of Trent teaches that the (Ten Commandments are obligatory for Christians and that the justified man is still bound to keep them); the Second Vatican Council confirms: “The bishops, successors of the apostles, receive from the Lord . . . the mission of teaching all peoples, and of preaching the Gospel to every creature, so that all men may attain (salvation through faith, Baptism and the observance of the Commandments).”

If it is by grace, it is no longer on the basis of works; otherwise grace would no longer be grace.

13. Galatians 3:10-11 “For all who rely on the works of the law are under a curse, as it is written: “Cursed is everyone who does not continue to do everything written in the Book of the Law.” Clearly no one who relies on the law is justified before God, because “the righteous will live by faith.”

14. James 2:10 For whoever keeps the whole law and yet stumbles at just one point is guilty of breaking all of it.

16. Romans 3:20 Therefore by the deeds of the law there shall no flesh be justified in his sight: for by the law is the knowledge of sin.

17. 2 Timothy 3:14-16 But you must remain faithful to the things you have been taught. You know they are true, for you know you can trust those who taught you. You have been taught the holy Scriptures from childhood, and they have given you the wisdom to receive the salvation that comes by trusting in Christ Jesus. All Scripture is inspired by God and is useful to teach us what is true and to make us realize what is wrong in our lives. It corrects us when we are wrong and teaches us to do what is right.

How about these passages?

18. James 2:20 Do you want to be shown, you foolish person, that faith apart from works is useless?

James 2 is examining a genuine faith vs a false faith.

It does not teach faith and works. God grants us repentance! Evidence of true faith will result in a new relationship with God’s Word. We won’t say things like I’m going to sin now and repent later. This shows a false conversion. We don’t fight for our salvation. Jesus paid it in full. Jesus has made us new.

20. 2 Corinthians 5:17 Therefore if any man be in Christ, he is a new creature: old things are passed away; behold, all things are become new.

21. Romans 6:1-6 What shall we say then? Are we to continue in sin that grace may abound? By no means! How can we who died to sin still live in it? Do you not know that all of us who have been baptized into Christ Jesus were baptized into his death? We were buried therefore with him by baptism into death, in order that, just as Christ was raised from the dead by the glory of the Father, we too might walk in newness of life. For if we have been united with him in a death like his, we shall certainly be united with him in a resurrection like his. We know that our old self was crucified with him in order that the body of sin might be brought to nothing, so that we would no longer be enslaved to sin.

22. 1 John 3:8-10 Whoever makes a practice of sinning is of the devil, for the devil has been sinning from the beginning. The reason the Son of God appeared was to destroy the works of the devil. No one born of God makes a practice of sinning, for God’s seed abides in him, and he cannot keep on sinning because he has been born of God. By this it is evident who are the children of God, and who are the children of the devil: whoever does not practice righteousness is not of God, nor is the one who does not love his brother.

23. Romans 4:3 For what saith the scripture? Abraham believed God, and it was counted unto him for righteousness.

24. Romans 9:30-32 What then shall we say? That the Gentiles, who did not pursue righteousness, have obtained it, a righteousness that is by faith; but the people of Israel, who pursued the law as the way of righteousness, have not attained their goal. Why not? Because they pursued it not by faith but as if it were by works. They stumbled over the stumbling stone.

Next: Caring What Others Think