Does God Change His Mind In The Bible?

Is This A Contradiction?

Many Christians stumble over trying to reconcile the apparent contradictions in Numbers 23:19 and Exodus 32:14. How can the omniscient, immutable God change His mind? 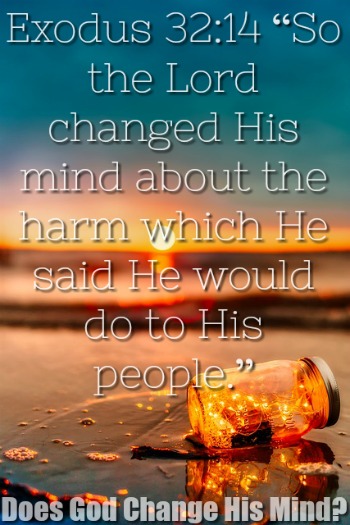 Exodus 32:14 “So the Lord changed His mind about the harm which He said He would do to His people.”

Psalm 110:4 “The Lord has sworn and will not change His mind, ‘You are a priest forever according to the order of Melchizedek.”

The Doctrine of God is the most important doctrine in all of Christianity. We must know who God is, what His character is, what He has done and will do. This sets up our entire understanding of the other crucial doctrines pertaining to our knowledge of the Trinity, our sin and our salvation. So, knowing how to rightly view these passages is vitally important.

We must have a proper hermeneutic when we read the scriptures. We can’t read a verse and ask, “what does this mean to you?”  – we have to know what the author INTENDED the verse to mean. We must take care to base our belief system on the entirety of Scripture. Scripture always supports Scripture. There is no contradictions in the Bible; this reflects God being all-knowing and His unchanging character. When applying proper Biblical Hermeneutics, we must:

So, when we read the historical narrative of Joshua and the battle of Jericho, it will read very differently than the poetry of Song of Solomon. When we read the passage about God being our fortress, we know that based on the proper hermeneutic it isn’t saying that God doesn’t look like a literal castle structure.

Literary form is a concept that helps us with these two verses in question. A literary form could be a parable, poem, narrative, prophesy, etc. We also have to ask is this passage a literal description, phenomenological language, or even anthropomorphic language?

Anthropomorphic Language is when God describes Himself in human like descriptions. We know that in John 4:24 “God is spirit” so when in Scripture we read that God “stretched out His hand” or about “shadow of His wings” we know that God does not literally have human like hands or bird like wings.

In the same way Anthropomorphic language can be using human emotions and actions like pity, regret, sorrow, remembering, and resting. God is conveying eternal aspects of Himself, concepts that are vastly beyond our comprehension, in relatable human-like descriptions. How humbling that God would take the time to explain such a spectacular concept to us, much like a Father explaining to a toddler, so that we can know more about Him?

Jonah 3:10 “When God saw their deeds, that they turned from their wicked way, then God relented concerning the calamity which He had declared He would bring upon them. And He did not do it.”

If this passage is not read in light of a proper hermeneutic, it would look like God sent a calamity upon the people out of anger. It looks like God sinned and needed to repent – that God Himself needed a Savior. This is completely wrong and even blasphemous. The Hebrew word here is nacham, translated relent or repent depending upon the English translation. The Hebrew word also means “comforted.” We can rightly say that the people repented, and God eased His judgement upon them.

We know that God can’t sin. He is Holy and Perfect. God uses anthropomorphism in this regard to illustrate an emotional concept that is like a man if he repented.  In contrast, there are other verses that illustrate that God is completely free from the need to repent because He is God.

Immutability & Omniscience and Changing His Mind…

Isaiah 42:9 “Behold, the former things have come to pass, now I declare new things; before they spring forth, I proclaim them to you.”

When the Bible says that God repented or changed His mind, it is not saying that something new has happened and now He is thinking a different way. Because God knows all things. Instead, it is describing God’s attitude changing. Not changing because events have caught Him off guard, but because now this aspect of His character is more fitting to express than it was earlier. Everything is laid out according to how He has ordained. His nature does not change. From eternity past, God has known exactly what was going to happen. He has infinite and complete knowledge of everything that will ever happen.

Malachi 3:6 “For I, the Lord, do not change; therefore you, O sons of Jacob, are not consumed.”

Isaiah 46:9-11  “Remember the former things long past, For I am God, and there is no other; I Am God, and there is no one like Me, declaring the end from the beginning, and from ancient times things which have not been done, saying, ‘My purpose will be established, and I will accomplish all My good pleasure’; calling a bird of prey from the east, the man of my purpose from a far country. Truly I have spoken; truly I will bring it to pass. I have planned it, surely I will do it.”

How marvelous and humbling that the Almighty God, creator of the heavens and earth, the very God who holds all of creation together by the power of His will desires for us to commune with Him? Prayer is our communicating with God. It is an opportunity to praise Him, to thank Him, to humble our hearts to His will. God is not a genie in a bottle nor is prayer a magic spell. When we pray, it emboldens our hearts to live in obedience to Christ. Let’s take a look at what the Bible says about the power of prayer.

James 5:16 “Therefore, confess your sins to one another, and pray for one another so that you may be healed. The effective prayer of a righteous man can accomplish much.”

1 John 5:14 “This is the confidence which we have before Him, that, if we ask anything according to His will, He hears us.”

James 4:2-3 “You do not have because you do not ask. You ask and do not receive, because you ask with wrong motives, so that you may spend it on your pleasures.”

Proverbs 21:1 “The King’s heart is like channels of water in the hand of the Lord; He turns it wherever He wishes.”

Does prayer then, change God’s mind? No. God is completely Sovereign. He has already decreed what would take place. God does use our prayers as a means of carrying out His will. Think of a time when you prayed to God to change a situation. He decreed before time began that you would pray the way you did and on the day you did. Just as He had already preordained that He would change the direction of the situation. Does prayer change things? Absolutely.

When we come to a passage that has anthropomorphism in it, the first thing we need to ask is “what does this teach us about God’s character traits?” Almost always when there is an anthropomorphism describing God to repent or change His mind, it is almost always in light of judgement. God isn’t being convinced by a guidance counselor or being annoyed at a nagging request. He is continuously being as He always is. God has promised to not punish sinners who are repentant. What’s more, God is graciously and mercifully letting us know more about Him by revealing Himself to us in simple to understand human terms. These anthropomorphisms should drive us to worship the Immutable God.

Next: How To Worship God?