Many Christians wonder are tattoos a sin and should they get one? I believe tattoos are sinful and believers should stay away from them. Tattoos have been known as a sin in Christianity for centuries, but now things are changing. The things that were once considered sinful are now acceptable. 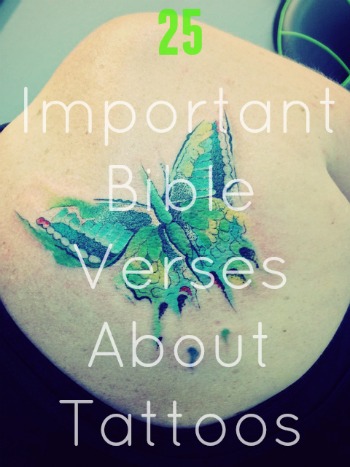 I want to remind people that you don’t go to Hell for having a tattoo. You go to Hell for not repenting of your sins and putting your trust in Jesus Christ alone for your salvation.

I have a few questions I want to ask those who desire a tattoo. How does God feel about it and do you care?

Do you want a tattoo for self promotion? Is it truly for God’s glory? Will it offend those weak in the faith? What did your parents say?

How will it look in the future? How will it affect your testimony? Do you plan to do it on impulse? Let’s begin.

In Leviticus 19:28 it says no tattoos. I know someone is going to say, “it’s in the Old Testament,” but the fact that it says, “no tattoos” should cause someone to think twice about getting a tattoo.

Also, there are some things that are only brought up in the Old Testament, but we still consider them a sin like Bestiality for example.

1. Leviticus 19:28 You shall not make any cuts in your body for the dead nor make any tattoo marks on yourselves: I am the Lord.

Honor God with your body.

This is God’s body not ours. You are going to have to give it back. Don’t think He’s going to be pleased with Bible verse tattoos. Imagine if I let you borrow my car and you brought it back with scratches all over it because you thought I would be OK with it. I will be angry.

Are we to alter God’s image? Some people are going to say, “1 Corinthians 6 was referring to sexual immorality,” but the principal still applies. Glorify God with your body. Do not defile God’s temple with tattoos. The disciples and early Christians knew how to honor God. Never did we hear about one of them getting a tattoo.

2. 1 Corinthians 6:19-20 Or do you not know that your body is a temple of the Holy Spirit who is in you, whom you have from God, and that you are not your own? For you have been bought with a price: therefore glorify God in your body.

3. Romans 12:1 Therefore, brothers, by the mercies of God, I urge you to present your bodies as a living sacrifice, holy and pleasing to God; this is your spiritual worship.

4. 1 Corinthians 3:16 Don’t you know that you yourselves are God’s temple and that God’s Spirit dwells in your midst?

Tattoos have roots in witchcraft, paganism, demonism, mysticism, and more. Never has tattoos ever been associated with God’s children until the 21st century of course. Let’s be honest. As the world and demonic activity started to get into the church so did tattoos.

5. 1 Kings 18:28 And they cried aloud and cut themselves after their custom with swords and lances, until the blood gushed out upon them.

6. 1 Corinthians 10:21 Ye cannot drink the cup of the Lord, and the cup of devils: ye cannot be partakers of the Lord’s table, and of the table of devils.

Many people get tattood to honor God.

7. Deuteronomy 12:4 “Do not worship the LORD your God in the way these pagan peoples worship their gods.”

8. Leviticus 20:23 “You must not live according to the customs of the nations I am going to drive out before you. Because they did all these things, I abhorred them.”

Are your motives truly pure?

I talked to people who said they want a tattoo because it means something, they can use it to share their faith, etc. I’m not denying that their motives are not genuine. However, I strongly believe that people will deceive themselves to cover up the real reason that they want a tattoo. The heart is deceitful. I’ve talked to people who said that they want to get a name tattoo of their family member. I talked to them and we finally got to the root of the reason.

They finally said it was because it looks cool. I believe for many believers the real reason is because it looks cool and everyone else has one and I’m going to justify it by saying this. People say, “I want a full sleeve to show off God, but instead they show off themselves.” They go out of their way for you to see that they have a tattoo. Rarely do people even bring up the topic of faith with tattoos.

Do you desire to bring attention to yourself? Would that be something that you would admit? We can lie to ourselves when we really desire something. Deep down what’s the real reason? Is it truly to bring glory to God or is it so you can show off, fit in, look cool, etc.

9. Proverbs 16:2 All the ways of a man are clean in his own eyes; but the LORD weigheth the spirits.

11. 1 Timothy 2:9 In like manner also, that women adorn themselves in modest apparel, with modesty and sobriety; not with braided hair, or gold, or pearls, or costly array.

Tattoos are conforming to the world.

I believe tattoos are conforming to the world. I also believe that there are godly Christians with tattoos, but do tattoos really show a heart for God?

In Romans we are told to renew our mind so we can prove what the will of God is. What does God want? I’m here to tell you that Christian t-shirts and Christian tattoos don’t make a man of God. They don’t make you radical. When you don’t renew your mind you are going to be stuck fighting with this. You are going to think I want to do this so bad and you might even make excuses to justify yourself. You might even start looking to websites that will justify what you want.

When your mind is set on God you desire less of what the world desires. There are some churches today with tattoo parlors in them. There are even Christian tattoo shops. You can’t add the word Christian to something that is pagan. God is not pleased with what is happening. More and more people want God and their own ways.

12. Romans 12:2 And be not conformed to this world: but be ye transformed by the renewing of your mind, that ye may prove what is that good, and acceptable, and perfect, will of God.

13. Ephesians 4:24 and to put on the new self, created to be like God in true righteousness and holiness.

14. 1 Peter 1:14-15 As obedient children, do not be conformed to the passions of your former ignorance, but as he who called you is holy, you also be holy in all your conduct.

Did Jesus have a tattoo on His thigh?

There are many people who think that Jesus had a tattoo, which is not true. Jesus would not have disobeyed God’s Word in Leviticus. Nowhere in the Bible did it say Jesus got a tattoo or any disciples getting one. This passage was being symbolic. In those times a king would have his title engraved on his garment or he could have had a banner that said, “King Of Kings.”

Do you have doubts?

Be honest with yourself. If you’re having doubts and you’re constantly fighting with should you do it or should you not do it, then it’s a good idea to stay away from it. If you are having doubts about something and you think it’s wrong, but you do it anyway then that is a sin. Do you have a clear conscience before God or is something saying don’t do it?

17. Romans 14:23 But whoever has doubts is condemned if they eat, because their eating is not from faith; and everything that does not come from faith is sin.

We shouldn’t look down upon people with tattoos.

I believe that tattoos are a sin, but that doesn’t mean that there aren’t many godly men and women with tattoos. I even have tattoos from my youth. I am not condemning any believer with tattoos. I love all my brothers and sisters in Christ regardless of appearance. However, from studying Scripture I strongly don’t believe God would want tattoos for His children.

Most of the time tattoos don’t give off the appearance of godliness and I know that, but there are many believers who look down upon others with tattoos and that is a sinful attitude. There are some people who see others with tattoos and say, “he is not Christian.” We have to fight against a critical spirit. Once again just because God doesn’t look at appearance does not mean it should be used as an excuse to get a tattoo.

19. John 7:24 “Do not judge according to appearance, but judge with righteous judgment.”

I have tattoos. Learn from my mistakes.

I got all of my tattoos when I was younger before I was saved. After I was saved, I was able to admit the real reason behind my desire for tattoos. Usually you don’t hear about tattooed Christians saying no don’t do it, but I’m telling you don’t do it. There are sometimes consequences of getting tattoos.

I’ve heard of many people who had allergic reactions and are suffering the consequences today with scars they have to live with for life. One of my tattoos led to an unsightly keloid scar that I had to get removed. We don’t think about the future.

Imagine 40 years from now. Your tattoos are going to be wrinkly, they will get faded, etc. I know so many people who regret the tattoos that they received in their youth. Although the number has decreased there are still many companies that won’t hire you if you have visible tattoos. It’s not worth it.

22. Luke 14:28 For which of you, intending to build a tower, sits not down first, and counts the cost, whether he have sufficient to finish it?

23. Proverbs 27:12 The prudent see danger and take refuge, but the simple keep going and pay the penalty.

You don’t want to cause your brother to stumble.

There are many people who believe tattoos are sinful and by getting one it can lead those weak in the faith to get one even though their hearts are condemned. It can also offend others. Think about the youth. Love thinks about others. Love makes sacrifices.

24. Romans 14:21 It is good neither to eat flesh, nor to drink wine, nor any thing whereby your brother stumbles, or is offended, or is made weak.

25. 1 Corinthians 8:9 But take heed lest by any means this liberty of your’s become a stumbling block to them that are weak.