Bible verses about judging others

People are always writing me saying, “don’t judge only God can judge.” This statement is not even in the Bible. Most of the people who say that it is wrong to judge others are not unbelievers. They are people who profess to be Christians. People don’t understand that they are being hypocritical because they are judging themselves.

These days people would rather allow people to go to hell than expose evil. Many people say, “why are Christians so judgmental?” You get judged all your life, but as soon as it’s about Christianity it is a problem. Judging is not sinful, but a judgmental critical heart is, which I will explain below. 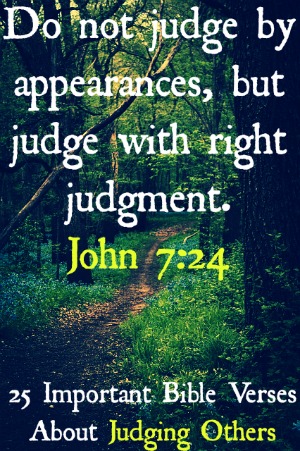 Scripture says that we are to expose evil. These false teachings and these lies entering Christianity that say, “you can be a homosexual and still be a Christian” would not have entered if more people would have stood up and said, “no it’s sin!”

2. Ephesians 5:11 Do not participate in the unfruitful deeds of darkness, but instead even expose them.

Sometimes being silent is a sin.

Many people point to Matthew 7:1 and say, “you see judging is a sin.” We must read it in context. It is talking about hypocritical judging. For example, how can I judge you for being a thief, but I steal just as much or more? How can I tell you to stop having premarital sex when I still have premarital sex? I have to examine myself. Am I being a hypocrite?

7. Romans 2:21-22 therefore you who teach someone else, do you not teach yourself? You who preach against stealing, do you steal? You who say that one should not commit adultery, do you commit adultery? You who abhor idols, do you rob temples?

How can we discern pigs and dogs if we don’t judge?

8. Matthew 7:6 Don’t give what is holy to dogs or toss your pearls before pigs, or they will trample them with their feet, turn, and tear you to pieces.

9. Matthew 7:15-16 Beware of false prophets who come to you in sheep’s clothing but inwardly are savage wolves. You will know them by their fruit. Grapes aren’t gathered from thorns, or figs from thistles, are they?

How are we to distinguish good from evil without judging?

10. Hebrews 5:14  But solid food is for the mature, for those who have their powers of discernment trained by constant practice to distinguish good from evil.

Many people use this one verse John 8:7 to say we can’t judge. You can’t use this verse because it would contradict all the other verses and it has to be used in context. In context the Jewish leaders who brought the adulterous woman were probably in sin themselves and that is why Jesus was writing in the dirt. The law required that the guilty man be punished as well. It is also required that there be a witness. Not only did they have neither, but it is possible that they knew the woman was an adulterous because she committed adultery with one of them. How else would they know?

11. John 8:3-11 And the scribes and Pharisees brought unto him a woman taken in adultery; and when they had set her in the midst, They say unto him, Master, this woman was taken in adultery, in the very act. Now Moses in the law commanded us, that such should be stoned: but what sayest thou? This they said, tempting him, that they might have to accuse him. But Jesus stooped down, and with his finger wrote on the ground, as though he heard them not. So when they continued asking him, he lifted up himself, and said unto them, He that is without sin among you, let him first cast a stone at her. And again he stooped down, and wrote on the ground. And they which heard it, being convicted by their own conscience, went out one by one, beginning at the eldest, even unto the last: and Jesus was left alone, and the woman standing in the midst. When Jesus had lifted up himself, and saw none but the woman, he said unto her, Woman, where are those thine accusers? hath no man condemned thee? She said, No man, Lord. And Jesus said unto her, Neither do I condemn thee: go, and sin no more.

12. 1 Corinthians 6:2 Or don’t you know that the saints will judge the world? And if the world is judged by you, are you unworthy to judge the smallest cases?

13. 1 Corinthians 2:15 The person with the Spirit makes judgments about all things, but such a person is not subject to merely human judgments.

How can we warn without judging?

14. 2 Thessalonians 3:15 Yet do not regard them as an enemy, but warn them as you would a fellow believer.

We are to judge, but we are not to judge by appearance. This is something that we all struggle with and we have to pray for help with. Whether we are at school, work, the grocery store, etc. We like to judge people by what we see, what they are wearing, what they are buying and this should not be. We see a poor person and think he got that way because he was an addict. We have to continually pray for help with the spirit of judgmentalism.

15. John 7:24 “Do not judge according to appearance, but judge with righteous judgment.”

Are we to let our brothers and sisters rebel and live wickedly without restoring them? When a Christian starts going astray we have to lovingly say something. Is it loving to watch someone walk on the road that leads to hell without saying anything? If I was on the wide road that led to hell and I died every second of me burning in hell I would hate you more and more. I would think to myself why didn’t he say anything to me?

17. James 5:20 Let him know, that he which converteth the sinner from the error of his way shall save a soul from death, and shall hide a multitude of sins.

18. Galatians 6:1-2 Brothers, if someone is caught in any wrongdoing, you who are spiritual should restore such a person with a gentle spirit, watching out for yourselves so you also won’t be tempted. Carry one another’s burdens; in this way you will fulfill the law of Christ.

The godly will appreciate an honest rebuke. Sometimes at first we do buckle up against it, but then we realize I needed to hear this.

19. Psalm 141:5 Let a righteous man strike me–that is a kindness; let him rebuke me–that is oil on my head. My head will not refuse it, for my prayer will still be against the deeds of evildoers.

20. Proverbs 9:8 Do not rebuke mockers or they will hate you; rebuke the wise and they will love you.

We are to speak the truth in love.

Some people judge with a bad heart to just tell someone off. There are some people who have a judgmental critical spirit and they search for something wrong with others, which is sinful. Some people are always putting others down and judging rudely. Some people put roadblocks in front of new believers and they will make them feel like they are in chains. Some people hold up big vicious signs to scare people. What they are doing is provoking people to anger.

We are to speak the truth in love and gentleness. We are to humble ourselves and know that we are sinners as well. We have all fallen short. I am not going to search for something wrong with you. I am not going to say something about every little last thing because I wouldn’t want anyone to do it to me. No one will like you if you have a heart of a Pharisee. For example, if a curse world slips out of your mouth I am not going to jump on you.

That has happened to me before. Now it’s a different story if you profess to be a believer and you are constantly cursing and using your mouth for wickedness without a care in the world. I will come to you with love, gentleness, and Scripture. Remember it’s always good to humble yourself and talk about your failures so the person and you will know it’s coming from a good heart.

21. Ephesians 4:15 Instead, speaking the truth in love, we will grow to become in every respect the mature body of him who is the head, that is, Christ.

22. Titus 3:2  to speak evil of no one, to avoid quarreling, to be gentle, and to show perfect courtesy toward all people.

Sometimes it is hard to rebuke someone, but a loving friend does tell us things we need to know even if it might hurt. Even though it might hurt we know that it is true and it’s coming from love.

23. Proverbs 27:5-6 Better is open rebuke than hidden love. Wounds from a friend can be trusted, but an enemy multiplies kisses.

Many godly men in the Bible judged others.

24. Acts 13:10 and said, “You who are full of all deceit and fraud, you son of the devil, you enemy of all righteousness, will you not cease to make crooked the straight ways of the Lord?”

25. John 3:20 Everyone who does evil hates the light, and will not come into the light for fear that their deeds will be exposed.

The last type of judging that I want to talk about is false judging. It is sinful to lie and falsely judge someone. Also, be careful that you don’t judge someone’s situation by what you see. For example, you see someone going through hard times and you say, “God what sin did he commit? Why doesn’t he just do this and that?” Sometimes we don’t understand the great work that God is doing in someone’s life. Sometimes it is God’s will that we go through a storm and many people on the outside looking in won’t understand it.