Hypocrites don’t practice what they preach. They say one thing, but do another. There are many people who claim all Christians are hypocrites without knowing the definition of the word and without knowing what being a Christian means.

Hypocrite Definition – a person who claims or pretends to have certain beliefs about what is right but who behaves in a way that disagrees with those beliefs. 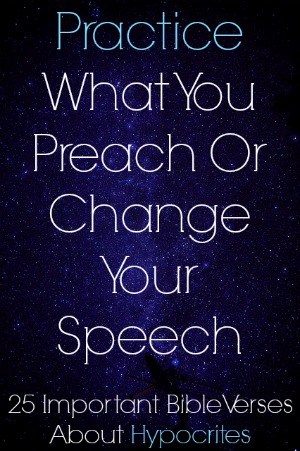 Are there religious hypocrites out there who try to appear holy and smarter than everyone else, but are filled with hypocrisy and wickedness? Of course, but there are also people who seek to do God’s will above everything else. Sometimes people are just immature believers.

Sometimes people have backslidden, but if someone is truly a child of God they will not continue to live in carnality. God will work in the lives of His children to conform them into the image of Christ. We must pray that God removes the spirit of hypocrisy from our lives. This post will cover everything about hypocrisy.

1. Matthew 7:1-5 “Don’t judge others, or you will be judged. You will be judged in the same way that you judge others, and the amount you give to others will be given to you. “Why do you notice the little piece of dust in your friend’s eye, but you don’t notice the big piece of wood in your own eye? How can you say to your friend, ‘Let me take that little piece of dust out of your eye? Look at yourself! You still have that big piece of wood in your own eye. You hypocrite! First, take the wood out of your own eye. Then you will see clearly to take the dust out of your friend’s eye.

People who live in hypocrisy to what they profess to be will be denied Heaven. You can’t be a hypocrite and be a Christian. You can’t have one foot in and one foot out.

3. Matthew 7:21-23 “Not everyone who says to Me, Lord, Lord!’ will enter the kingdom of heaven, but only the one who does the will of My Father in heaven. On that day many will say to Me, Lord, Lord, didn’t we prophesy in Your name, drive out demons in Your name, and do many miracles in Your name?’ Then I will announce to them, I never knew you! Depart from Me, you lawbreakers!’

This chapter starts off by saying beware of dogs. Beware of people who teach salvation is not by faith alone. They seek to follow the law, but they themselves are not even following the law perfectly. They are hypocrites, they have no mercy, and they are without humility.

Hypocrites could look like John MacArthur, but on the inside they are full of deception.

5. Matthew 23:27-28″Woe to you, teachers of the law and Pharisees, you hypocrites! You are like whitewashed tombs, which look beautiful on the outside but on the inside are full of the bones of the dead and everything unclean. In the same way, on the outside you appear to people as righteous but on the inside you are full of hypocrisy and wickedness.

Hypocrites talk about Jesus, pray, etc. But their hearts are not cooperating.

6. Mark 7:6 He replied, “Isaiah was right when he prophesied about you hypocrites; as it is written: “‘These people honor me with their lips, but their hearts are far from me.

Many people know the Bible front and back, but they are not living the life that they recite to others.

7. James 1:22-23 Do not merely listen to the word, and so deceive yourselves. Do what it says. Anyone who listens to the word but does not do what it says is like someone who looks at his face in a mirror and, after looking at himself, goes away and immediately forgets what he looks like.

Hypocrites may have remorse over sins, but they never change. There is a difference between worldly and godly sorrow. Godly sorrow leads to repentance. With worldly sorrow you are only sad that you got caught.

8. Matthew 27:3-5 When Judas, who had betrayed him, saw that Jesus was condemned, he was seized with remorse and returned the thirty pieces of silver to the chief priests and the elders. “I have sinned,” he said, “for I have betrayed innocent blood.” “What is that to us?” they replied. “That’s your responsibility.” So Judas threw the money into the temple and left. Then he went away and hanged himself.

Hypocrites are self-righteous and they think that they are better Christians than everyone so they look down upon others.

9. Luke 18:11-12 The Pharisee stood by himself and prayed: ‘God, I thank you that I am not like other people–robbers, evildoers, adulterers–or even like this tax collector. I fast twice a week and give a tenth of all I get.’

Many Christians are called hypocrites because we expose evil and stand up and say this stuff is sin. That is not being hypocritical. Judging is not bad. We all judge daily and get judged at work, school, and our everyday environment.

What is sinful is a judgmental spirit. Searching for things wrong with people and judging small insignificant things. This is what a person with a pharisee heart does. They judge the smallest things, but they don’t examine their own selves to see that they are not perfect themselves.

I believe we all have had this hypocritical heart before. We judge out of shape people at the grocery store for buying bad food, but we have done the same things. We have to examine ourselves and pray about this.

11. John 7:24 Stop judging by mere appearances, but instead judge correctly.”

Hypocrites care about the small things, but not the important things.

13. Matthew 23:23 “Woe to you, teachers of the law and Pharisees, you hypocrites! You give a tenth of your spices–mint, dill and cumin. But you have neglected the more important matters of the law–justice, mercy and faithfulness. You should have practiced the latter, without neglecting the former.

Why Are Christians Hypocrites?

Christians are often accused of being hypocritical and people often say there are hypocrites in the church. Most people get confused of the actual meaning of the word hypocrite. As soon as a Christian does something wrong he or she is branded a hypocrite when really the person is a sinner.

Everybody is a sinner, but when a Christian sins the world puts it out there more because they expect us to be non-human when really a Christian that gives his life to Jesus Christ says Lord I am not perfect I am a sinner.

First, everywhere you go there will be sinners and some type of drama. Work, school, home, it happens less inside the church, but it’s always publicized and advertised when something happens at church because the world tries to make us look bad.

Why does it matter that there are hypocrites in the church? What does that have to do with you and worshiping the Lord with the body of Christ? Would you not go to the gym because there are so many quitters and out of shape people?

The church is a hospital for sinners. We all have sinned and fallen short of God’s glory. Although we are saved by the blood of Christ we all struggle with sin. The difference is that God is working in the lives of true believers and they will not dive head first into sin. They don’t say if Jesus is this good I can sin all that I want. People who live in hypocrisy are not Christians

14. Romans 3:23-24 for all have sinned and fall short of the glory of God, and all are justified freely by his grace through the redemption that came by Christ Jesus.

15. 1 John 1:8-9 If we say, “We have no sin,” we are deceiving ourselves, and the truth is not in us. If we confess our sins, He is faithful and righteous to forgive us our sins and to cleanse us from all unrighteousness.

16. Matthew 24:51 He will cut him to pieces and assign him a place with the hypocrites, where there will be weeping and gnashing of teeth.

17. Romans 1:18-22 The wrath of God is being revealed from heaven against all the godlessness and wickedness of people, who suppress the truth by their wickedness, since what may be known about God is plain to them, because God has made it plain to them. For since the creation of the world God’s invisible qualities–his eternal power and divine nature–have been clearly seen, being understood from what has been made, so that people are without excuse. For although they knew God, they neither glorified him as God nor gave thanks to him, but their thinking became futile and their foolish hearts were darkened. Although they claimed to be wise, they became fools

18. Romans 2:14-15 Even Gentiles, who do not have God’s written law, show that they know his law when they instinctively obey it, even without having heard it. They demonstrate that God’s law is written in their hearts, for their own conscience and thoughts either accuse them or tell them they are doing right.

Doing good deeds to be seen.

You are a hypocrite if you do things to be seen by others such as celebrities who turn on cameras to give to the poor. While you think that you have a good heart your heart is bad.

I would like to take the moment to add that some people give to the poor, but they neglect the people closest to them and they don’t show love and compassion to their family. We all have to examine ourselves and pray for this spirit of hypocrisy.

19. Matthew 6:1 “Be careful not to practice your righteousness in front of others to be seen by them. If you do, you will have no reward from your Father in heaven.

20. Matthew 6:2 So whenever you give to the poor, don’t blow a trumpet before you like the hypocrites do in the synagogues and in the streets so that they will be praised by people. I tell all of you with certainty, they have their full reward!

21. Matthew 6:5 When you pray, you are not to be like the hypocrites; for they love to stand and pray in the synagogues and on the street corners so that they may be seen by men. Truly I say to you, they have their reward in full.

22. Matthew 23:5 They do all their deeds to be seen by others. For they make their phylacteries broad and their fringes long.

23. Psalm 55:21 His talk is smooth as butter, yet war is in his heart; his words are more soothing than oil, yet they are drawn swords.

24. Psalm 12:2 Everyone lies to their neighbor; they flatter with their lips but harbor deception in their hearts.

Hypocrites can even receive the word and even show signs of good fruit for a while, but then they go back to their ways.

25. Matthew 13:20-21 The seed falling on rocky ground refers to someone who hears the word and at once receives it with joy. But since they have no root, they last only a short time. When trouble or persecution comes because of the word, they quickly fall away.

Please if you have been living in hypocrisy you must repent and put your trust in Christ alone. If you are not saved please click here.

Previous: Being Honest With God