Sadly there are many false believers who will be expecting to go to Heaven and will be denied entrance. The best way to avoid being one is to make sure you have truly put your trust in Christ alone for salvation.

When you have repented and put your faith in Christ that will lead to a change of life. Follow God and educate yourself with his Word. 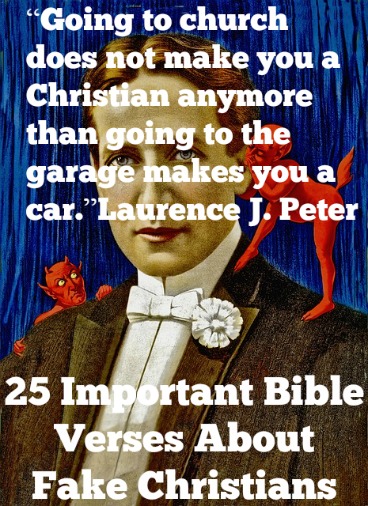 Many people follow false teachings from the Bible given by false preachers or they just refuse to obey instructions from God and follow their own minds.

There are many people who throw on the Christian name tag and think by just going to church they will be granted Heaven, which is false. You know there are people like that in your church and especially in the youth today.

You know there are people still having sex outside of marriage, still going to clubs, they still have a continuous willful potty mouth. Hell will be worse for these people than atheists. They are just Sunday Christians and they don’t care about Christ. Am I saying that a Christian is perfect? No. Can a Christian backslide? Yes, but there will be growth and maturity in a true believers life because it is God working in them. They won’t just remain in darkness if they are the Lord’s sheep because God will discipline them and also His sheep hear His voice.

Beware there are many.

1. Matthew 15:8 These people honor me with their lips, but their hearts are far from me.

2. Isaiah 29:13 And so the Lord says, “These people say they are mine. They honor me with their lips, but their hearts are far from me. And their worship of me is nothing but man-made rules learned by rote.

3. James 1:26 If a person thinks that he is religious but can’t control his tongue, he is fooling himself. That person’s religion is worthless.

4 1 John 2:9 Those who say that they are in the light but hate other believers are still in the dark.

5. Titus 1:16  They claim to know God, but they deny him by what they do. They are detestable, disobedient, and unfit to do anything good.

Fake Christians sin on purpose saying, “I’ll just repent later” and disobey God’s teachings. Even though we are all sinners Christians don’t sin willfully and deliberately.

8. 1 John 3:8-10 The person who practices sin belongs to the evil one, because the Devil has been sinning from the beginning. The reason that the Son of God was revealed was to destroy what the Devil has been doing. No one who has been born from God practices sin, because God’s seed abides in him. Indeed, he cannot go on sinning, because he has been born from God. This is how God’s children and the Devil’s children are distinguished. No person who fails to practice righteousness and to love his brother is from God.

These people think there is another way to get into Heaven.

12. John 14:23-24 Jesus replied, “Anyone who loves me will obey my teaching. My Father will love them, and we will come to them and make our home with them. Whoever does not love me does not keep my words. And the word that you hear is not mine but the Father’s who sent me.”

14. 2 Corinthians 5:17 Therefore, if anyone is in Christ, he is a new creation. The old has passed away; behold, the new has come.

They are hypocrites. Even though the Bible says we are to lovingly, kindly, and gently go to our brothers and sisters alone to correct them of their sins, how can you do that, but you’re doing the same thing as them just as much or even more than them? People who do things for show such as give to the poor and other acts of kindness to be seen by others are also hypocrites.

16. Matthew 6:1-2 Beware of practicing your righteousness before other people in order to be seen by them, for then you will have no reward from your Father who is in heaven. Thus, when you give to the needy, sound no trumpet before you, as the hypocrites do in the synagogues and in the streets, that they may be praised by others. Truly, I say to you, they have received their reward.

17. Matthew 12:34 You brood of vipers, how can you who are evil say anything good? For the mouth speaks what the heart is full of.

They will not enter into Heaven. False converts will be denied.

20. Revelation 22:15 Outside are the dogs, those who practice magic arts, the sexually immoral, the murderers, the idolaters and everyone who loves and practices falsehood.

Fake Christians are false preachers and false prophets just like the cast of Preachers of LA.

21. 2 Corinthians 11:13-15 For such men are false apostles, deceitful workmen, disguising themselves as apostles of Christ. And no wonder, for even Satan disguises himself as an angel of light. So it is no surprise if his servants, also, disguise themselves as servants of righteousness. Their end will correspond to their deeds.

22. Jude 1:4 For certain people have crept in unnoticed who long ago were designated for this condemnation, ungodly people, who pervert the grace of our God into sensuality and deny our only Master and Lord, Jesus Christ.

23. 2 Peter 2:1 But there were false prophets also among the people, even as there shall be false teachers among you, who privily shall bring in damnable heresies, even denying the Lord that bought them, and bring upon themselves swift destruction.

24. Romans 16:18 For they that are such serve not our Lord Jesus Christ, but their own belly; and by good words and fair speeches deceive the hearts of the simple.

25. 2 Timothy 4:3-4 For the time is coming when people will not endure sound teaching, but having itching ears they will accumulate for themselves teachers to suit their own passions, and will turn away from listening to the truth and wander off into myths.

If you don’t know the Lord please click here to find out how to be saved.

Previous: A Promising Future: 15 Bible Verses For The Dreamer’s Heart