Bible verses about levels of hell

When we read Scripture there does seem to be different degrees of punishment in hell. The people who sit in church all day and always hear the message of Christ, but do not truly accept Him will be in more pain in hell. The more that is revealed to you, the greater the responsibility and the greater the judgment. At the end of the day Christians should not worry about this. Hell is still eternal pain and torment. 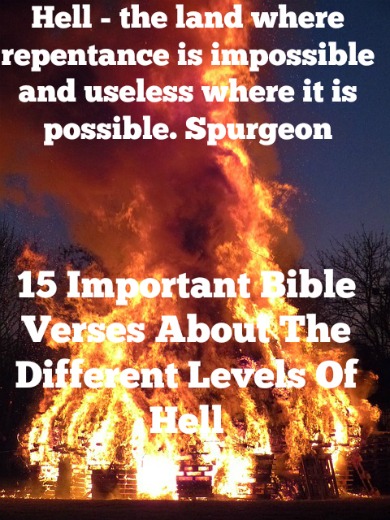 Everybody is screaming right now in hell. Even if someone is moved from the hottest part of hell to another he will still be screaming and crying.

The people who should be worrying are unbelievers and false Christians who continually live in rebellion because these days there are many.

Hell – the land where repentance is impossible and useless where it is possible. Spurgeon

1. Matthew 23:14 “”How terrible it will be for you, scribes and Pharisees, you hypocrites! You devour widows’ houses and say long prayers to cover it up. Therefore, you will receive greater condemnation!

2. Luke 12:47-48 That servant who knew what his master wanted but didn’t prepare himself or do what was wanted will receive a severe beating. But the servant who did things that deserved a beating without knowing it will receive a light beating. Much will be required from everyone to whom much has been given. But even more will be demanded from the one to whom much has been entrusted.”

3. Matthew 10:14-15 If anyone doesn’t welcome you or listen to what you say, leave that house or city, and shake its dust off your feet. I can guarantee this truth: Judgment day will be better for Sodom and Gomorrah than for that city.

4. Luke 10:14-15 But it will be more bearable in the judgment for Tyre and Sidon than for you. And you, Capernaum, will you be exalted to heaven? You shall be brought down to Hades.

5. James 3:1  Not many of you should become teachers, my brothers, because you know that we who teach will be judged more severely than others.

6. 2 Peter 2:20-22 For if, after they have escaped the defilements of the world through the knowledge of our Lord and Savior Jesus Christ, they are again entangled in them and overcome, the last state has become worse for them than the first. For it would have been better for them never to have known the way of righteousness than after knowing it to turn back from the holy commandment delivered to them. What the true proverb says has happened to them: “The dog returns to its own vomit, and the sow, after washing herself, returns to wallow in the mire.”

7. John 19:11 Jesus answered, “You would have no authority over Me, unless it had been given you from above; for this reason he who delivered Me to you has the greater sin.”

Sadly most people will not make it into Heaven.

8. Matthew 7:21-23 Not everyone who keeps saying to me, ‘Lord, Lord,’ will get into the kingdom from heaven, but only the person who keeps doing the will of my Father in heaven. Many will say to me on that day, ‘Lord, Lord, we prophesied in your name, drove out demons in your name, and performed many miracles in your name, didn’t we?’ Then I will tell them plainly, ‘I never knew you. Get away from me, you who practice evil!’

9. Luke 13:23-24 And someone said to him, “Lord, will those who are saved be few?” And he said to them, “Strive to enter through the narrow door. For many, I tell you, will seek to enter and will not be able.

12. Luke 13:28 In that place there will be weeping and gnashing of teeth, when you see Abraham and Isaac and Jacob and all the prophets in the kingdom of God but you yourselves cast out.

13. Revelation 14:11 And the smoke of their torment goes up forever and ever, and they have no rest, day or night, these worshipers of the beast and its image, and whoever receives the mark of its name.”

14. Revelation 21:8 But as for the cowardly, the faithless, the detestable, as for murderers, the sexually immoral, sorcerers, idolaters, and all liars, their portion will be in the lake that burns with fire and sulfur, which is the second death.”

15. Galatians 5:19-21 The wrong things the sinful self does are clear: committing sexual sin, being morally bad, doing all kinds of shameful things, worshiping false gods, taking part in witchcraft, hating people, causing trouble, being jealous, angry or selfish, causing people to argue and divide into separate groups, being filled with envy, getting drunk, having wild parties, and doing other things like this. I warn you now as I warned you before: The people who do these things will not have a part in God’s kingdom.

Revelation 20:12-15 I saw the dead, both important and unimportant people, standing in front of the throne. Books were opened, including the Book of Life. The dead were judged on the basis of what they had done, as recorded in the books. The sea gave up its dead. Death and hell gave up their dead. People were judged based on what they had done. Death and hell were thrown into the fiery lake. (The fiery lake is the second death.) Those whose names were not found in the Book of Life were thrown into the fiery lake.

Next: 8 Valuable Qualities To Look For In A Godly Husband