Capital punishment is a very controversial topic. In the Old Testament we see that God commanded people to be executed for murder and various other crimes such as adultery, homosexuality, sorcery, kidnapping, etc. 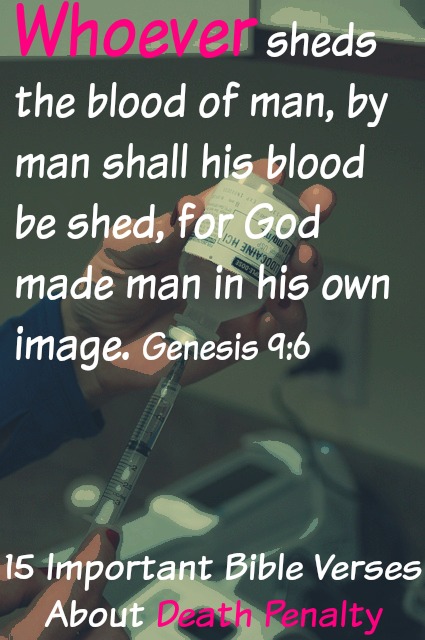 God instituted the death penalty and Christians are to never try to fight against it. Scripture makes it clear that the government has the authority to determine when it is to be used.

Most of the time in the United States murder does not result in the death penalty, but when it does we are not to rejoice or oppose it unless the person is innocent.

At the end of the day all sin results in being sentenced to eternity in hell.

The only way to escape the wrath of God even for people who committed murder before, is by accepting Christ as your Lord and Savior.

What does the Bible say in the Old Testament?

3. Deuteronomy 19:11-12 But if out of hate someone lies in wait, assaults and kills a neighbor, and then flees to one of these cities, the killer shall be sent for by the town elders, be brought back from the city, and be handed over to the avenger of blood to die.

5. Deuteronomy 27:24 “Cursed is anyone who kills their neighbor secretly.” Then all the people shall say, “Amen!”

7. Genesis 9:6 If anyone takes a human life, that person’s life will also be taken by human hands. For God made human beings in his own image.

9. Acts 25:9-11 But Festus wanted to do the Jews a favor. So he asked Paul, “Are you willing to go to Jerusalem to be tried there on these charges with me as your judge?” Paul said, “I am standing in the emperor’s court where I must be tried. I haven’t done anything wrong to the Jews, as you know very well. If I am guilty and have done something wrong for which I deserve the death penalty, I don’t reject the idea of dying. But if their accusations are untrue, no one can hand me over to them as a favor. I appeal my case to the emperor!

10.Romans 13:1-4 Everyone must submit to governing authorities. For all authority comes from God, and those in positions of authority have been placed there by God. So anyone who rebels against authority is rebelling against what God has instituted, and they will be punished. For the authorities do not strike fear in people who are doing right, but in those who are doing wrong. Would you like to live without fear of the authorities? Do what is right, and they will honor you. The authorities are God’s servants, sent for your good. But if you are doing wrong, of course you should be afraid, for they have the power to punish you. They are God’s servants, sent for the very purpose of punishing those who do what is wrong. So you must submit to them, not only to avoid punishment, but also to keep a clear conscience.

11. 1 Peter 2:13 Submit yourselves to every ordinance of man for the Lord’s sake: whether it be to the king, as supreme;

The crime of not repenting and putting your trust in Christ for salvation. Punishable by life in Hell.

12. 2 Thessalonians 1:8-9 in flaming fire, inflicting vengeance on those who do not know God and on those who do not obey the gospel of our Lord Jesus. They will suffer the punishment of eternal destruction, away from the presence of the Lord and from the glory of his might.

13. John 3:36 Whoever believes in the Son has eternal life, but whoever rejects the Son will not see life, for God’s wrath remains on them.

14. Revelation 21:8 But the cowardly, the unbelieving, the vile, the murderers, the sexually immoral, those who practice magic arts, the idolaters and all liars–they will be consigned to the fiery lake of burning sulfur. This is the second death.”

15. Revelation 21:27 But nothing unclean will ever enter it, nor anyone who does what is detestable or false, but only those who are written in the Lamb’s book of life.