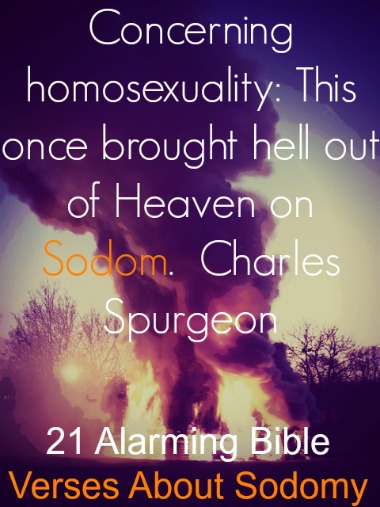 It is a sin against nature. The Word sodomy comes from Sodom and Gomorrah and God destroyed the city because of homosexuality.

Genesis 18:20-21 And the Lord said, Because the cry of Sodom and Gomorrah is great, and because their sin is very grievous; I will go down now, and see whether they have done altogether according to the cry of it, which is come unto me; and if not, I will know.

Sex is supposed to be natural and within marriage. While sex positions within marriage do not matter, it is clear from these Scriptures that God condemns sodomy.

1. Genesis 19:4-7 Before they could lie down, all the men of Sodom and its outskirts, both young and old, surrounded the house. They called out to Lot and asked, “Where are the men who came to visit you tonight? Bring them out to us so we can have sex with them!” Lot went outside to them, shut the door behind him, and said, “I urge you, my brothers, don’t do such a wicked thing.”

2. Genesis 19:12-13 Then the two visitors said to Lot, “Who else do you have here? Do you have any sons-in-law, sons, daughters, or other relatives in the city? Get them out of this place because we are about to destroy it. The outcry against this place is so great before the Lord that he has sent us to destroy it.”

3. Judges 19:22 While they were enjoying themselves, a crowd of troublemakers from the town surrounded the house. They began beating at the door and shouting to the old man, “Bring out the man who is staying with you so we can have sex with him.”

4. 2 Peter 2:6-10 Later, God condemned the cities of Sodom and Gomorrah and turned them into heaps of ashes. He made them an example of what will happen to ungodly people. But God also rescued Lot out of Sodom because he was a righteous man who was sick of the shameful immorality of the wicked people around him. Yes, Lot was a righteous man who was tormented in his soul by the wickedness he saw and heard day after day. So you see, the Lord knows how to rescue godly people from their trials, even while keeping the wicked under punishment until the day of final judgment. He is especially hard on those who follow their own twisted sexual desire, and who despise authority. These people are proud and arrogant, daring even to scoff at supernatural beings without so much as trembling.

5. Jude 1:7 So also Sodom and Gomorrah and the neighboring towns, since they indulged in sexual immorality and pursued unnatural desire in a way similar to these angels, are now displayed as an example by suffering the punishment of eternal fire.

God uses the word sodomite in reference to homosexuals.

6. 1 Kings 14:24 And there were also sodomites in the land: and they did according to all the abominations of the nations which the LORD cast out before the children of Israel.

7. 1 Kings 15:12  And he took away the sodomites out of the land, and removed all the idols that his fathers had made.

8. Isaiah 1:10 Listen to what the Lord says, you rulers of Sodom, and pay attention to the teaching of our God, you people of Gomorrah!

9. Isaiah 3:8-9 For Jerusalem has stumbled, and Judah has fallen, because what they say and do opposes the Lord.
they keep defying him. The expressions on their faces give them away.  They parade their sin around like Sodom; they don’t even try to hide it. How horrible it will be for them, because they have brought disaster on themselves!

Homosexuality is a sin!

10. Leviticus 20:13 If a man has sexual relations with another male as he would with a woman, both have committed a repulsive act. They are certainly to be put to death.

11. 1 Corinthians 6:9 Don’t you know that the unrighteous will not inherit God’s kingdom? Do not be deceived: No sexually immoral people, idolaters, adulterers, or anyone practicing homosexuality.

13. Romans 1:25-27 They exchanged God’s truth for a lie and worshipped and served the creation rather than the Creator, who is blessed forever. Amen. For this reason, God delivered them to degrading passions as their females exchanged their natural sexual function for one that is unnatural. In the same way, their males also abandoned their natural sexual function toward females and burned with lust toward one another. Males committed indecent acts with males, and received within themselves the appropriate penalty for their perversion.

The sin of gay pride.

14. Ezekiel 16:49 Now this was the iniquity of your sister Sodom: she and her daughters had pride, plenty of food, and comfortable security, but didn’t support the poor and needy.

15. Galatians 5:19 Now the actions of the flesh are obvious: sexual immorality, impurity, promiscuity.

16. Galatians 5:24 Now those who belong to Christ have crucified the flesh with its passions and desires.

17. Isaiah 55:9  For as the heavens are higher than the earth, so are my ways higher than your ways, and my thoughts than your thoughts.

18. Colossians 3:5 Therefore, put to death what belongs to your worldly nature: sexual immorality, impurity, lust, evil desire, and greed, which is idolatry.

19. Genesis 1:27-28 So God created man in his own image, in the image of God he created him; male and female he created them. And God blessed them. And God said to them, “Be fruitful and multiply and fill the earth and subdue it, and have dominion over the fish of the sea and over the birds of the heavens and over every living thing that moves on the earth.”

There is hope for sodomites if they turn from their sins and trust in Christ alone for salvation. Christ died to take away your chains and set you free.

20. 1 Corinthians 6:11 And some of you used to be like this. But you were washed, you were sanctified, you were justified in the name of the Lord Jesus Christ and by the Spirit of our God.

21. 1 Peter 2:24 He himself bore our sins in his body on the tree, that we might die to sin and live to righteousness. By his wounds you have been healed.

Hebrews 13:4 Marriage must be honored among all and the marriage bed kept undefiled, for God will judge sexually immoral people and adulterers.

Next: Bible Verses About Darkness