Is incest a sin? Yes, it is also illegal and it should be reported. Incest is a form of child abuse and sexual immorality. Not only is incest between a parent and a child shameful and abominable before God, but all forms of incest. 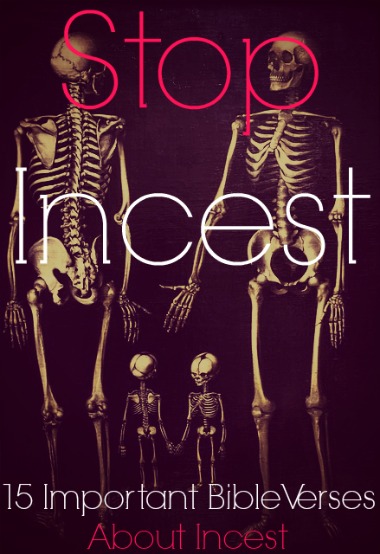 There are so many side effects of inbreeding. Many critics will say well the Bible condones incest, which is false.

There was indeed a time where the genetic line was pure. Adam and Eve’s children had no other people around so to produce more children they had to commit incest.

I must also point out that this happened pre-law. The human genetic code eventually became more and more corrupt and incest became unsafe.

At the time of Moses God commanded against sexual relations with close relatives. It doesn’t matter if someone is only family through marriage, God says no. Let’s learn more below about incest in the Bible.

1. 1 Corinthians 5:1  I can hardly believe the report about the sexual immorality going on among you–something that even pagans don’t do. I am told that a man in your church is living in sin with his stepmother.

5. Deuteronomy 27:20 Cursed is anyone who has sexual intercourse with one of his father’s wives, for he has violated his father.’ And all the people will reply, ‘Amen.’

Worthy of the death penalty.

6. Leviticus 20:11 “‘If a man has sexual relations with his father’s wife, he has dishonored his father. Both the man and the woman are to be put to death; their blood will be on their own heads.

7. Leviticus 20:12 “‘If a man has sexual relations with his daughter-in-law, both of them are to be put to death. What they have done is a perversion; their blood will be on their own heads.

8. Leviticus 20:14 “If a man marries both a woman and her mother, he has committed a wicked act. The man and both women must be burned to death to wipe out such wickedness from among you.

9. Leviticus 20:19-21 “Do not have sexual relations with your aunt, whether your mother’s sister or your father’s sister. This would dishonor a close relative. Both parties are guilty and will be punished for their sin. “If a man has sex with his uncle’s wife, he has violated his uncle. Both the man and woman will be punished for their sin, and they will die childless. “If a man marries his brother’s wife, it is an act of impurity. He has violated his brother, and the guilty couple will remain childless.

Amnon raped his half sister and was later killed because of it.

11. 2 Samuel 13:7-14 So David agreed and sent Tamar to Amnon’s house to prepare some food for him. When Tamar arrived at Amnon’s house, she went to the place where he was lying down so he could watch her mix some dough. Then she baked his favorite dish for him. But when she set the serving tray before him, he refused to eat. “Everyone get out of here,” Amnon told his servants. So they all left. Then he said to Tamar, “Now bring the food into my bedroom and feed it to me here.” So Tamar took his favorite dish to him. 11 But as she was feeding him, he grabbed her and demanded, “Come to bed with me, my darling sister.” “No, my brother!” she cried. “Don’t be foolish! Don’t do this to me! Such wicked things aren’t done in Israel. Where could I go in my shame? And you would be called one of the greatest fools in Israel. Please, just speak to the king about it, and he will let you marry me.” But Amnon wouldn’t listen to her, and since he was stronger than she was, he raped her.

Reuben slept with his fathers concubine and was later penalized.

12. Genesis 35:22 While he was living there, Reuben had intercourse with Bilhah, his father’s concubine, and Jacob soon heard about it. These are the names of the twelve sons of Jacob:

13. Genesis 49:4 But you are as unruly as a flood, and you will be first no longer. For you went to bed with my wife; you defiled my marriage couch.

The sins of Jerusalem.

14. Ezekiel 22:9-10 People accuse others falsely and send them to their death. You are filled with idol worshipers and people who do obscene things. Men sleep with their fathers’ wives and have intercourse with women who are menstruating.

15. Galatians 5:19-21 Now the works of the flesh are obvious: sexual immorality, moral impurity, promiscuity, idolatry, sorcery, hatreds, strife, jealousy, outbursts of anger, selfish ambitions, dissensions, factions, envy, drunkenness, carousing, and anything similar. I tell you about these things in advance—as I told you before—that those who practice such things will not inherit the kingdom of God.