Whenever I hear about anointing oil it is usually never something biblical. Charismatic churches have taken anointing oil to a whole different level. Many people who place anointing oil on others in Pentecostal churches in America are not even saved. 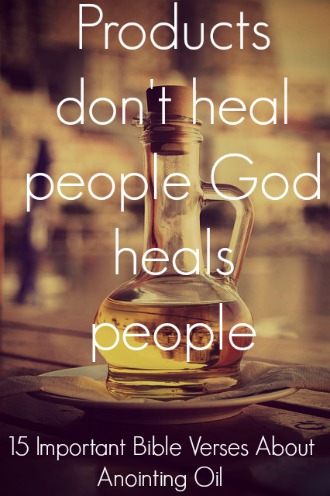 Not only is anointing oil being used wrongly in the U.S. It is being abused in other countries such as India, Haiti, Africa, etc. Unsaved televangelists and crooks are selling these oils for $29.99. It makes me mad. People are actually selling the healing of God.

What it’s saying is, “don’t go to God. This is the real stuff and this is what you need.” Not even thinking about God once people bath in anointing oil as if it were a magic potion. It is idolatry!

I hate what is going on in the church today. God doesn’t bless products. He blesses people. Why are we looking and saying, “wow I need this product?” No! We need the Almighty God. God heals people not anointing oil.

In the Old Testament priests were anointed as a mark of being holy.

2. Leviticus 16:32 “The priest who is anointed and ordained to succeed his father as high priest is to make atonement. He is to put on the sacred linen garments.”

3. Exodus 29:7 “Take the anointing oil and anoint him by pouring it on his head.”

The oil of gladness

4. Psalm 45:7 “You love righteousness and hate wickedness; therefore God, your God, has set you above your companions by anointing you with the oil of joy.”

5. Hebrews 1:8-9 “But of the Son he says, “Your throne, O God, is forever and ever, the scepter of uprightness is the scepter of your kingdom. You have loved righteousness and hated wickedness; therefore God, your God, has anointed you with the oil of gladness beyond your companions.”

Anointing oil was used as a preparation for burial.

6. Mark 14:3-8 “While he was in Bethany, reclining at the table in the home of Simon the Leper, a woman came with an alabaster jar of very expensive perfume, made of pure nard. She broke the jar and poured the perfume on his head. Some of those present were saying indignantly to one another, “Why this waste of perfume? It could have been sold for more than a year’s wages and the money given to the poor.” And they rebuked her harshly. “Leave her alone,” said Jesus. “Why are you bothering her? She has done a beautiful thing to me. The poor you will always have with you, and you can help them any time you want. But you will not always have me. She did what she could. She poured perfume on my body beforehand to prepare for my burial.”

Anointing oil was used as a symbol in the Bible. I am not saying using oil as a symbol is wrong, but you will not find anything in Scripture that tells us we should use oil today.

7. Psalm 89:20 “I have found David my servant; with my sacred oil I have anointed him. My hand will sustain him; surely my arm will strengthen him.”

8. 1 Samuel 10:1 “Then Samuel took a flask of olive oil and poured it on Saul’s head and kissed him, saying, “Has not the LORD anointed you ruler over his inheritance?”

9. James 5:14 “Is any sick among you? let him call for the elders of the church; and let them pray over him, anointing him with oil in the name of the Lord.”

Anointing oil does not have power to heal. Ministers don’t have the power to heal. It is God who heals. Only God can work miracles. People need to stop making a mockery out of it. If that was the case wouldn’t Paul have healed Timothy?

10. 1 Timothy 5:23 “Stop drinking only water, and use a little wine because of your stomach and your frequent illnesses.”

Watch out for these money hungry crooks who try to sell blessings.

11. 2 Peter 2:3 And through covetousness shall they with feigned words make merchandise of you: whose judgment now of a long time lingereth not, and their damnation slumbereth not.

12. 2 Corinthians 2:17 Unlike so many, we do not peddle the word of God for profit. On the contrary, in Christ we speak before God with sincerity, as those sent from God.

13. Romans 16:18 For such people are not serving our Lord Christ, but their own appetites. By smooth talk and flattery they deceive the minds of naive people.

The Lord’s power is not for sale and people who try to buy it reveal their bad heart.

14. Acts 8:20-21 Peter answered: “May your money perish with you, because you thought you could buy the gift of God with money! You have no part or share in this ministry, because your heart is not right before God.”

Why have anointing oil? Believers are given the Holy Spirit that anoints us.

15. 1 John 2:27 As for you, the anointing you received from him remains in you, and you do not need anyone to teach you. But as his anointing teaches you about all things and as that anointing is real, not counterfeit–just as it has taught you, remain in him.

2 Corinthians 1:21-22 Now it is God who makes both us and you stand firm in Christ. He anointed us, set his seal of ownership on us, and put his Spirit in our hearts as a deposit, guaranteeing what is to come.