We should not be making excuses because they usually lead to sin. In life, you will always hear excuses like “no one is perfect” from someone who wants to justify rebellion towards God’s Word. 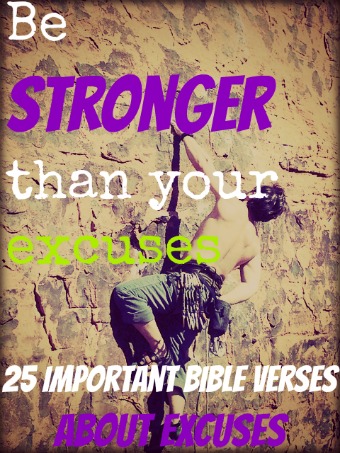 Christians are a new creation. We can’t live a life of willful sin. If a person practices sin that person is not a Christian at all.

“How about if I don’t want to go to church or become a Christian because there are too many hypocrites?”

There are hypocrites everywhere you go in life. You don’t accept Christ for others you do it for yourself.

You are responsible for your own salvation. Another way you can make excuses is by being afraid to do God’s will.

If you are sure that God told you to do something don’t be afraid to do it because He is by your side. If that is truly His will for your life it will be accomplished. Always examine yourself and ask yourself this question, am I making an excuse?

1. Luke 14:15-20 Hearing this, a man sitting at the table with Jesus exclaimed, “What a blessing it will be to attend a banquet in the Kingdom of God!” Jesus replied with this story: “A man prepared a great feast and sent out many invitations. When the banquet was ready, he sent his servant to tell the guests, ‘Come, the banquet is ready. But they all began making excuses. One said, ‘I have just bought a field and must inspect it. Please excuse me. Another said, ‘I have just bought five pairs of oxen, and I want to try them out. Please excuse me. Another said, ‘I now have a wife, so I can’t come.’

The blame game! Adam and Eve

2. Genesis 3:11-13  Who told you that you were naked?” the Lord God asked. “Have you eaten from the tree whose fruit I commanded you not to eat?” The man replied, “It was the woman you gave me who gave me the fruit, and I ate it.” Then the Lord God asked the woman, “What have you done?” “The serpent deceived me,” she replied. “That’s why I ate it.”

Making excuses when the Holy Spirit convicts you of sin.

3. Romans 14:23 But whoever has doubts is condemned if they eat, because their eating is not from faith; and everything that does not come from faith is sin.

4. Hebrews 3:8 do not harden your hearts as they did when they provoked me during the time of testing in the wilderness.

5. Psalm 141:4 Incline not my heart to evil words; to make excuses in sins. With men that work iniquity: and I will not communicate with the choicest of them.

7. Proverbs 26:12-16 There is more hope for fools than for people who think they are wise. The lazy person claims, “There’s a lion on the road! Yes, I’m sure there’s a lion out there!” As a door swings back and forth on its hinges, so the lazy person turns over in bed. Lazy people take food in their hand but don’t even lift it to their mouth. Lazy people consider themselves smarter than seven wise counselors.

8. Proverbs 20:4 The sluggard does not plow in the autumn; he will seek at harvest and have nothing.

When we procrastinate we are making excuses.

There is never an excuse for being rebellious towards God’s Word, which will bring you to hell.

10. 1 John 1:6 So we are lying if we say we have fellowship with God but go on living in spiritual darkness; we are not practicing the truth.

12. John 15:22 They would not be guilty if I had not come and spoken to them. But now they have no excuse for their sin.

14. 1 John 3:8-10 Whoever makes a practice of sinning is of the devil, for the devil has been sinning from the beginning. The reason the Son of God appeared was to destroy the works of the devil. No one born of God makes a practice of sinning, for God’s seed abides in him, and he cannot keep on sinning because he has been born of God. By this it is evident who are the children of God, and who are the children of the devil: whoever does not practice righteousness is not of God, nor is the one who does not love his brother.

There is no excuse for believing there is no God.

15. Romans 1:20 For ever since the world was created, people have seen the earth and sky. Through everything God made, they can clearly see his invisible qualities–his eternal power and divine nature. So they have no excuse for not knowing God.

You find out something you don’t like about your spouse so you give reasons for getting a divorce.

16. Matthew 5:32 But I say to you that everyone who divorces his wife, except on the ground of sexual immorality, makes her commit adultery, and whoever marries a divorced woman commits adultery.

Making excuses for doing God’s will.

17. Exodus 4:10-14 But Moses pleaded with the Lord, “O Lord, I’m not very good with words. I never have been, and I’m not now, even though you have spoken to me. I get tongue-tied, and my words get tangled.” Then the Lord asked Moses, “Who makes a person’s mouth? Who decides whether people speak or do not speak, hear or do not hear, see or do not see? Is it not I, the Lord? Now go! I will be with you as you speak, and I will instruct you in what to say.” But Moses again pleaded, “Lord, please! Send anyone else.” Then the Lord became angry with Moses. “All right,” he said. “What about your brother, Aaron the Levite? I know he speaks well. And look! He is on his way to meet you now. He will be delighted to see you.”

18. Exodus 3:10-13 Now go, for I am sending you to Pharaoh. You must lead my people Israel out of Egypt.” But Moses protested to God, “Who am I to appear before Pharaoh? Who am I to lead the people of Israel out of Egypt?” God answered, “I will be with you. And this is your sign that I am the one who has sent you: When you have brought the people out of Egypt, you will worship God at this very mountain.” But Moses protested, “If I go to the people of Israel and tell them, ‘The God of your ancestors has sent me to you,’ they will ask me, ‘What is his name?’ Then what should I tell them?”

19. Romans 3:19 Obviously, the law applies to those to whom it was given, for its purpose is to keep people from having excuses, and to show that the entire world is guilty before God.

20. Proverbs 6:30 Excuses might be found for a thief who steals because he is starving.

21. Galatians 6:7 Do not be deceived: God cannot be mocked. A man reaps what he sows.

22. 2 Timothy 1:7 for God gave us a spirit not of fear but of power and love and self-control.

Life is not certain don’t put it off, accept Christ today. Make sure you know where you’re going. Is it heaven or hell?

23. James 4:14 Why, you do not even know what will happen tomorrow. What is your life? You are a mist that appears for a little while and then vanishes.

25. Exodus 5:21  The Israelite foremen could see that they were in serious trouble when they were told, “You must not reduce the number of bricks you make each day.” As they left Pharaoh’s court, they confronted Moses and Aaron, who were waiting outside for them. The foremen said to them, “May the Lord judge and punish you for making us stink before Pharaoh and his officials. You have put a sword into their hands, an excuse to kill us!”

2 Corinthians 5:10 For we must all appear before the judgment seat of Christ, so that each one may receive what is due for what he has done in the body, whether good or evil.