Does Weed Get You Closer To God? (Biblical Truths)

I’ve heard many people say, “I feel closer to God when I’m high.” However, is it true? Does weed get you closer to God? Can you sense His presence more? Are the effects of marijuana so great that you can actually feel God? The answer is no! Feelings are very deceptive. 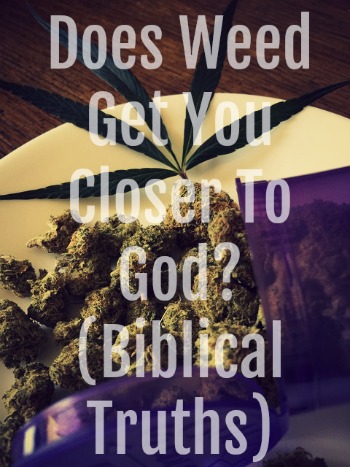 Just like you can feel that you’re in love with someone even though you are not actually in love, you can feel closer to God even though you are far from Him. If you are living in sin, then you are not close to God. Matthew 15:8 “These people honor me with their lips, but their hearts are far from me.” Weed doesn’t bring you closer to God. It leads you further into deception.

Before I was saved I would always use this excuse, but it was a lie from Satan. Marijuana use is a sin. That might offend some of you, but we have to remember that God’s Word will offend and convict. Once we stop making excuses for our sin we see them for what they are. First, to the question “Can Christians smoke weed?” The answer is no! Believers should have nothing to do with pot. Paul said, “I will not be brought under the power of any.”

The sole purpose of smoking is to be high which opposes what Paul was saying in 1 Corinthians 6. Pot use yields up control to any external force. When you’re high you feel a certain way that you didn’t feel before. You might feel close to something, but it’s not God. We have to stop feeding our lusts in God’s name. Once you fall into the deception of thinking God wants you to do this or this brings you closer to God, then you fall deeper and deeper into darkness.

For example, many people practice voodoo thinking it’s of God even though practicing voodoo is evil and sinful. When God drew me to repentance He allowed me to see that marijuana is of the world and that is why it is promoted by some of the world’s most sinful celebrities. I was never closer to God when I used to smoke pot. Sin has a way of deceiving us. Don’t you know that Satan is a clever guy? He knows how to trick people. If you’re currently saying to yourself, “this blogger is stupid,” then you’re involved in deception. You are making excuses for the sin that you can’t let go.

Ephesians 2:2 reads, “You used to live in sin, just like the rest of the world, obeying the devil–the commander of the powers in the unseen world. He is the spirit at work in the hearts of those who refuse to obey God.” The ESV translation says that Satan is the “prince of the power of the air, the spirit that is now at work in the sons of disobedience.” Satan loves to reach you when you are most vulnerable such as when you’re high so that he can deceive you into thinking that something that is not of God is of God. Smoking weed does not agree with being sober-minded which contradicts God’s warning to us. 1 Peter 5:8 says, “Be sober-minded; be watchful. Your adversary the devil prowls around like a roaring lion, seeking someone to devour.”

Some may say, “why would God put weed on this earth if He didn’t want us to enjoy it?” There are many things on this earth that we wouldn’t dare eat and smoke and that we should stay away from. We wouldn’t dare try Poison Ivy, Oleander, Water Hemlock, Deadly Nightshade, White Snakeroot, etc. God told Adam not to eat from the tree of knowledge. Some things are off limits.

Don’t allow Satan to deceive you like he deceived Eve. Set the weed aside and turn to Christ. 2 Corinthians 11:3 “But I am afraid that, the serpent deceived Eve by his craftiness, your minds will be led astray from the simplicity and purity of devotion to Christ.” We have to learn to trust in the Lord and not our mind which leads to problems. Proverbs 3:5 “Trust in the LORD with all your heart, and do not lean on your own understanding.”

Marijuana use is sinful in the eyes of God. It’s illegal and where it is legal it’s shady. I had to repent of my pot use and if you are smoking pot you must repent as well. God’s love is greater than pot. He’s all you need! Who needs a temporary high when you can have everlasting joy in Christ? Has God changed your life? Do you know where you’re going when you die? Do you have a genuine relationship with Christ? Don’t run away from His love! Please if you’re not sure of these things, then read this salvation Bible verses article.