Only God Can Judge Me

What does only God can judge me mean? We all have heard this statement at some point in our lives, but is this statement biblical? The plain answer is no. This is actually a Tupac Shakur song.

When people say this, they are saying you are a human and you have no right to judge me. Many people who don’t want to be held accountable for their deliberate sins use this excuse. Yes it is true the Lord will judge you, but God’s people will judge you as well. 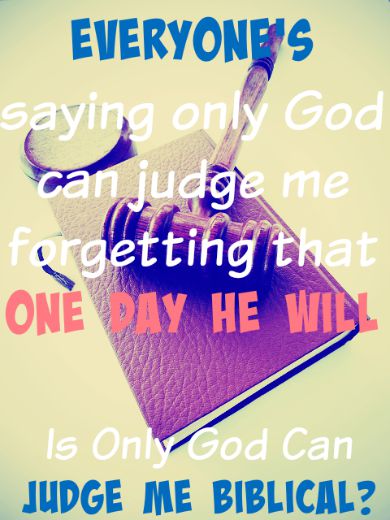 I will admit there are indeed Christians who have critical hearts and literally search for something wrong with you so they can judge and no believer should act like this.

But the truth is the Bible says not to judge hypocritically and off of appearance. Throughout our lives we are judged. For example, we are judged at school, when getting a drivers license, and at work, but it’s never a problem.

It’s only a problem when it has to do with Christianity. How are we to stay away from bad friends if we can’t judge? How are we to save others from their sins? When Christians try to correct rebellious people we do so out of love and we do it humbly, gently, and kindly not trying to act like we are better than the person, but sincerely trying to help.

You don’t know what you’re saying. The truth is you wouldn’t want God to judge you. God is a consuming fire. When He judges the wicked, He throws them in Hell for eternity. There will be no escaping the torment. Jesus didn’t die so you can spit on His grace and  mock Him by your actions. Do you not care about the great price that Jesus paid for you soul. Repent of your sins. Put your trust in Christ alone for salvation.

These Scriptures that many people take out of context are talking about hypocritical judging. How can you judge someone when you’re sinning just as much or even worse than they are? Take the log out of your eye before you try to correct others.

The Bible teaches us to judge correctly and not off of appearance.

John 7:24 “Do not judge according to appearance, but judge with righteous judgment.”

Leviticus 19:15 “Do not pervert justice; do not show partiality to the poor or favoritism to the great, but judge your neighbor fairly.”

Scripture teaches us to bring people who are living in rebellion back on the right path.

James 5:20 “Realize that whoever brings a sinner back from the error of his ways will save him from death, and many sins will be forgiven.”

Galatians 6:1 “Brothers and sisters, if a person gets trapped by wrongdoing, those of you who are spiritual should help that person turn away from doing wrong. Do it in a gentle way. At the same time watch yourself so that you also are not tempted.”

Matthew 18:15-17 “If your brother sins against you, go and rebuke him in private. If he listens to you, you have won your brother. But if he won’t listen, take one or two more with you, so that by the testimony of two or three witnesses every fact may be established. If he pays no attention to them, tell the church. But if he doesn’t pay attention even to the church, let him be like an unbeliever and a tax collector to you.”

Romans 16:17-18 “Now I beseech you, brethren, mark them which cause divisions and offences contrary to the doctrine which ye have learned; and avoid them. For they that are such serve not our Lord Jesus Christ, but their own belly; and by good words and fair speeches deceive the hearts of the simple.”

Matthew 7:15-16 “Beware of false prophets who come to you in sheep’s clothing but inwardly are savage wolves. You will know them by their fruit. Grapes aren’t gathered from thorns, or figs from thistles, are they?”

If you remain rebellious towards His Word you wouldn’t want God to judge you.

Psalm 7:11 “God is an honest judge. He is angry with the wicked every day.”

Hebrews 10:31 “It is a dreadful thing to fall into the hands of the living God.”

When using this excuse to justify willful sin goes wrong.

1 John 3:8-10 “The one who practices sin is of the devil, because the devil has been sinning from the beginning. For this purpose the Son of God was revealed: to destroy the works of the devil. Everyone who has been fathered by God does not practice sin, because God’s seed resides in him, and thus he is not able to sin, because he has been fathered by God. By this the children of God and the children of the devil are revealed: Everyone who does not practice righteousness—the one who does not love his fellow Christian—is not of God.”

At the end of the day the Lord will judge.

John 12:48 “The one who rejects me and does not accept my words has a judge; the word I have spoken will judge him at the last day.”

2 Corinthians 5:10 “For we must all appear before the judgment seat of Christ, so that each one may be paid back according to what he has done while in the body, whether good or evil.”