“Christians are intolerant. They are the most bigoted people I have ever come across. They can’t accept the belief of others and then they call themselves loving, how in the world is that ‘loving’? Jesus Christ taught others to love their neighbors, but are the so-called Christians following His teachings? No, Jesus would be ashamed of such people.” 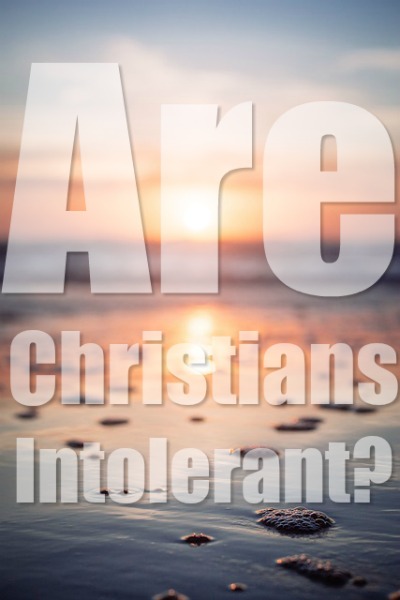 You may have come across individuals who unequivocally hurl such insults at you. But you should not panic. The key is to stay calm, let the individual finish his rant and then talk to him/her about it. To begin, first we need to define what the term ‘tolerance’ means.

The word has been flipped and tossed around so badly that it has lost its meaning. My oxford dictionary tells me that tolerance means ‘the ability or willingness to tolerate the existence of opinions or behaviour that one dislikes or disagrees with’. But in today’s postmodern culture, tolerance has lost its essence and now it is loosely defined as ‘accepting all views as true.’

Part of the problem lies in the fact that some professing Christians in the past (in the present as well) have committed atrocities in the name of Christ which has led to us being labelled as ‘Intolerant’. The biggest example is the ‘Inquisition’. Whenever the ‘inquisition’ arrow is aimed at me, my first response to the accuser is that I am deeply sorry for whatever they did and being a Christian I condemn such acts. This has to be a genuine gesture of love and care.

Coming back to the issue of ‘tolerance’, the first thing to do whenever someone accuses you (or Christianity) of being intolerant is to ask a very simple question, “What do you mean by intolerant?” As explained earlier this will give you a chance to explain to him where the actual problem lies when the cards are on the table. The other thing that I have learned, in whatever little study I have carried over the past couple of years, in the field of apologetics, is to find out self-refuting statements.

Once you master this, it becomes extremely easy to guide your conversation the way you want. In this case, the person accuses you of being ‘intolerant’ because you don’t agree with his view, but he is equally intolerant, because he doesn’t agree with your view! Did you see what happened there? Try this in your conversation with the skeptics next time and see the wonders it can create.

As Gregory Koukl explains in his book Tactics (I highly recommend this book to everyone whoever is interested in apologetics), “If you notice that a person’s view point self-destructs, point it out with a question rather than a statement”, this will help in reducing the tension, as the question will force the person to learn about his folly, rather than you pointing that out with a statement. Of course don’t get me wrong, our aim isn’t to win an argument or a debate, also not to put others in awkward positions or embarrass them, but we should use such tactics out of love and care for the person.

As such we can disagree with others on a lot of issues but we need to be able to draw the line. What I mean by that is we should be able to differentiate between the belief and the person. We can disagree with the belief and let the ideologies collide with one another, but in the end we should still respect the individual as he is created in God’s image. We also need to remind others that the truth of Christianity doesn’t imply that people with other faiths are 100% wrong. We can still agree with them on certain moral truths as such, so they do have a little truth but not THE truth as we know it.

What does Bible have to say about such issues? We looked at this issue philosophically but haven’t really dived into the scriptures, which we shall do now!

2 Timothy 4:1-2
I charge you in the presence of God and of Christ Jesus, who is to judge the living and the dead, and by his appearing and his kingdom: preach the word; be ready in season and out of season; reprove, rebuke, and exhort, with complete patience and teaching.

Preach the word but also be ready to reprove and rebuke. When do we rebuke? We do it when we find others to be swaying away. In other words, they are doing something which is against God’s command. We are ‘not’ told to be tolerant of them and allow them to do whatever they feel like doing, but instead we as the Disciples of Christ are in charge of making sure that they return back to God.

Colossians 3: 13-17
13 Be tolerant with one another and forgive one another whenever any of you has a complaint against someone else. You must forgive one another just as the Lord has forgiven you.
14 And to all these qualities add love, which binds all things together in perfect unity.
15 The peace that Christ gives is to guide you in the decisions you make; for it is to this peace that God has called you together in the one body. And be thankful.
16 Christ’s message in all its richness must live in your hearts. Teach and instruct one another with all wisdom. Sing psalms, hymns, and sacred songs; sing to God with thanksgiving in your hearts.
17 Everything you do or say, then, should be done in the name of the Lord Jesus, as you give thanks through him to God the Father.

These are some of the most powerful words with incredible profundity and clarity. We are told to be tolerant of others and forgive others in verse 13 and then as we read further in verse 16, we are told to be teachers and instructors! How amazing is the Word of God that the more we read and meditate, the more we are matured not only with spiritual food but it also helps us to grow practically!