As Christians we are supposed to be imitators of Christ who shows no favoritism, so neither should we. In Scripture we learn that it’s forbidden and it should especially never be done with children. 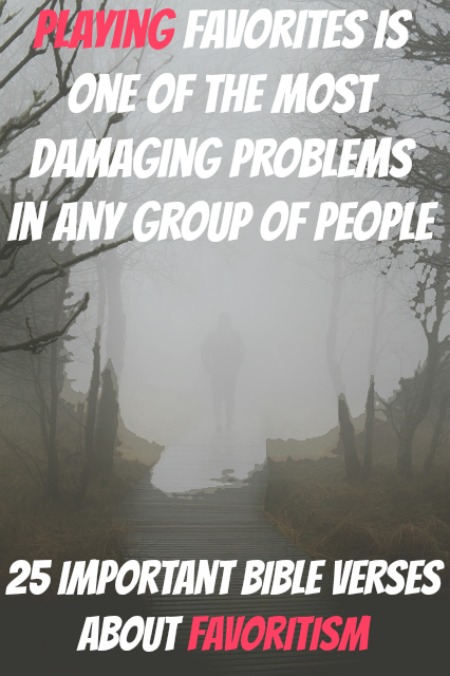 In life we show favoritism by favoring the rich over the poor, treating others differently because of misjudging them, one race over another race, one gender over another gender, a person’s status at work or church over someone else’s, and when we pick sides.

Be respectable and kind to all. Don’t judge off of appearance and repent of all partiality.

Playing favorites is one of the most damaging problems in any group of people.

Favoritism is a sin.

1. James 2:8-9 If you really keep the royal law found in Scripture, “Love your neighbor as yourself,” you are doing right. But if you show favoritism, you sin and are convicted by the law as lawbreakers.

2. James 2:1 My brothers and sisters, believers in our glorious Lord Jesus Christ must not show favoritism.

3. 1 Timothy 5:21 I solemnly command you in the presence of God and Christ Jesus and the highest angels to obey these instructions without taking sides or showing favoritism to anyone.

4. Galatians 3:27-28 Indeed, all of you who were baptized into the Messiah have clothed yourselves with the Messiah. Because all of you are one in the Messiah Jesus, a person is no longer a Jew or a Greek, a slave or a free person, a male or a female.

5. Acts 10:34-36 Then Peter replied, “I see very clearly that God shows no favoritism. In every nation he accepts those who fear him and do what is right. This is the message of Good News for the people of Israel—that there is peace with God through Jesus Christ, who is Lord of all.

7. Deuteronomy 10:17 For the Lord your God is the God of gods and Lord of lords. He is the great God, the mighty and awesome God, who shows no partiality and cannot be bribed.

8. Colossians 3:25 For the wrongdoer will be paid back for the wrong he has done, and there is no partiality.

9. 2 Chronicles 19:6-7 Jehoshaphat said to them, “Watch what you do, because you are not judging for people but for the Lord. He will be with you when you make a decision. Now let each of you fear the Lord. Watch what you do, because the Lord our God wants people to be fair. He wants all people to be treated the same, and he doesn’t want decisions influenced by money.”

10. Job 34:19 who shows no partiality to princes, nor regards the rich more than the poor, for they are all the work of his hands?

But God does listen to the righteous, but not the wicked.

11. 1 Peter 3:12 For the eyes of the Lord are on the righteous, and his ears are open to their prayer. But the face of the Lord is against those who do evil.”

12. John 9:31 We know that God does not listen to sinners, but if anyone is a worshiper of God and does his will, God listens to him.

13. Proverbs 15:29 The Lord is far from the wicked, but he hears the prayer of the righteous.

14. Proverbs 15:8 The LORD detests the sacrifice of the wicked, but the prayer of the upright pleases him.

15. Proverbs 10:3 The LORD does not let the righteous go hungry, but he thwarts the craving of the wicked.

16. Proverbs 24:23 These also are sayings of the wise: To show partiality in judging is not good:

17. Exodus 23:2 “Do not follow the crowd in doing wrong. When you give testimony in a lawsuit, do not pervert justice by siding with the crowd,

18. Deuteronomy 1:17 Do not show partiality in judging; hear both small and great alike. Do not be afraid of anyone, for judgment belongs to God. Bring me any case too hard for you, and I will hear it.”

19. Leviticus 19:15 “‘Do not pervert justice; do not show partiality to the poor or favoritism to the great, but judge your neighbor fairly.

20. Ephesians 5:1 Therefore be imitators of God, as beloved children.

21. James 1:22 Do not merely listen to the word, and so deceive yourselves. Do what it says.

22. Romans 12:16 Live in harmony with one another. Do not be proud, but be willing to associate with people of low position. Do not be conceited.

23. Genesis 43:33-34 Meanwhile, the brothers were seated in front of Joseph in birth order, from firstborn to youngest. The men stared at one another in astonishment. Joseph himself brought portions to them from his own table, except that he provided to Benjamin five times as much as he did for each of the others. So they feasted together and drank freely with Joseph.

24. Genesis 37:2-3 These are the generations of Jacob. Joseph, being seventeen years old, was feeding the flock with his brethren; and the lad was with the sons of Bilhah, and with the sons of Zilpah, his father’s wives: and Joseph brought unto his father their evil report. Now Israel loved Joseph more than all his children, because he was the son of his old age: and he made him a coat of many colours.