Does the Bible condone slavery? Does it promote it? Let’s find out what the Bible really says about slavery. This topic is filled with so much confusion and so much lies brought on by the atheist Bible critics. The first thing that Satan always wants to do is attack the Word of God just like he did in the garden. 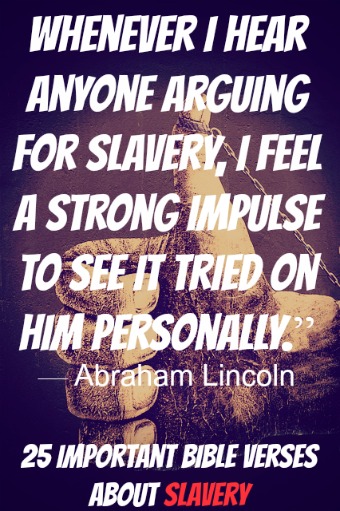 While Scripture does recognize that there is slavery it never promotes it. God abhors slavery. When people think of slavery they automatically think of black people.

The kidnapping slavery and unjust treatment of African-Americans back in the day is condemned in Scripture. In fact, it is punishable by death and nowhere in Scripture does God condone slavery because the color of someone’s skin. Many people forget that it was Christians who worked to free slaves.

“Whenever I hear anyone arguing for slavery, I feel a strong impulse to see it tried on him personally.”
— Abraham Lincoln

“All that we call human history–money, poverty, ambition, war, prostitution, classes, empires, slavery–[is] the long terrible story of man trying to find something other than God which will make him happy.”  C.S. Lewis

“I can only say that there is not a man living who wishes more sincerely than I do to see a plan adopted for the abolition of slavery.”  George Washington

In the Bible people voluntarily sold themselves to slavery so they could receive food, water, and shelter for themselves and their family. If you were poor and had no choice, but to sell yourself to slavery, what would you do?

1. Leviticus 25:39-42 I “If your brother with you becomes so poor that he sells himself to you, you are not to make him serve like a bond slave. Instead, he is to serve with you like a hired servant or a traveler who lives with you, until the year of jubilee. Then he and his children with him may leave to return to his family and his ancestor’s inheritance. Since they’re my servants whom I’ve brought out of the land of Egypt, they are not to be sold as slaves.

2. Deuteronomy 15:11-14 There will always be poor people in the land. Therefore I command you to be openhanded toward your fellow Israelites who are poor and needy in your land. If any of your people–Hebrew men or women–sell themselves to you and serve you six years, in the seventh year you must let them go free. And when you release them, do not send them away empty-handed. Supply them liberally from your flock, your threshing floor and your winepress. Give to them as the LORD your God has blessed you.

A thief could become a slave to pay his debt.

3. Exodus 22:3 but if it happens after sunrise, the defender is guilty of bloodshed. “Anyone who steals must certainly make restitution, but if they have nothing, they must be sold to pay for their theft.

Treatment of slaves: God cared for slaves and made sure that they were not abused.

4. Leviticus 25:43 You are not to rule over them with harshness. You are to fear your God.”

5. Ephesians 6:9 And masters, treat your slaves in the same way. Do not threaten them, since you know that he who is both their Master and yours is in heaven, and there is no favoritism with him.

6. Colossians 4:1 Masters, provide your slaves with what is right and fair, because you know that you also have a Master in heaven.

8. Exodus 21:20 “If a man beats his male or female slave with a club and the slave dies as a result, the owner must be punished.

9. Proverbs 30:10 Don’t slander a servant to his master or he will curse you, and you will become guilty.

Are people supposed to be slaves forever?

10. Deuteronomy 15:1-2 “At the end of every seven years you shall grant a remission of debts. This is the manner of remission: every creditor shall release what he has loaned to his neighbor; he shall not exact it of his neighbor and his brother, because the Lord’s remission has been proclaimed.

Some slaves chose not to leave.

12. Deuteronomy 15:16 But suppose a male slave says to you, “I don’t want to leave you,” because he loves you and your family and is happy with you.

Why don’t the Bible critics ever read these verses that condemns the kidnapping slavery of long ago?

13. Deuteronomy 24:7 If someone is caught kidnapping a fellow Israelite and treating or selling them as a slave, the kidnapper must die. You must purge the evil from among you.

14. Exodus 21:16 “Anyone who kidnaps someone is to be put to death, whether the victim has been sold or is still in the kidnapper’s possession.

15. 1 Timothy 1:9-10 We also know that the law is made not for the righteous but for lawbreakers and rebels, the ungodly and sinful, the unholy and irreligious, for those who kill their fathers or mothers, for murderers, for the sexually immoral, for those practicing homosexuality, for slave traders and liars and perjurers–and for whatever else is contrary to the sound doctrine.

16. Galatians 3:28 There is neither Jew nor Gentile, neither slave nor free, nor is there male and female, for you are all one in Christ Jesus.

17. Genesis 1:27 So God created man in His own image; in the image of God He created him; male and female He created them.

Paul encourages slaves to become free if they can, but if they can’t then don’t worry about it.

As Christians we are slaves to Christ and we proclaim that with joy.

19. Romans 1:1 This letter is from Paul, a slave of Christ Jesus, chosen by God to be an apostle and sent out to preach his Good News.

20. Ephesians 6:6 Obey them not only to win their favor when their eye is on you, but as slaves of Christ, doing the will of God from your heart.

Christianity and the Bible doesn’t condone slavery it solves it. When you become a Christian you are not going to want slavery to exist. That is why it was Christians who fought to end slavery and get equal rights for all.

22. Philemon 1:16 no longer as a slave but more than a slave—a beloved brother, especially to me but how much more to you, both in the flesh and in the Lord.

23. Philippians 2:2-4 then make my joy complete by being like-minded, having the same love, being one in spirit and of one mind. Do nothing out of selfish ambition or vain conceit. Rather, in humility value others above yourselves, not looking to your own interests but each of you to the interests of the others.

24. Romans 13:8-10 Let no debt remain outstanding, except the continuing debt to love one another, for whoever loves others has fulfilled the law. The commandments, “You shall not commit adultery,” “You shall not murder,” “You shall not steal,” “You shall not covet,” and whatever other command there may be, are summed up in this one command: “Love your neighbor as yourself.” Love does no harm to a neighbor. Therefore love is the fulfillment of the law.

25. Exodus 9:1-4 Then the LORD said to Moses, “Go to Pharaoh and say to him, ‘This is what the LORD, the God of the Hebrews, says: “Let my people go, so that they may worship me.” If you refuse to let them go and continue to hold them back, the hand of the LORD will bring a terrible plague on your livestock in the field–on your horses, donkeys and camels and on your cattle, sheep and goats. But the LORD will make a distinction between the livestock of Israel and that of Egypt, so that no animal belonging to the Israelites will die.'”

As you can clearly see the slavery in the Bible was way different from the slavery of African Americans. Slave traders are considered lawless and associated with murderers, homosexuals, and immoral people. God shows no favoritism. Watch out for liars who try to pick a verse out the Bible to say you see the Bible promotes slavery, which is a lie from Satan.

Without Christ you are a slave to sin. Please if you’re not a Christian read this page now!