Can women be pastors? No! Many women say, “God called me to be a preacher.” No He did not and Scripture clearly proves it! God never called you to do anything that contradicts His Word. There are many famous female pastors such as Joyce Meyer, Juanita Bynum, Paula White, Victoria Osteen, Nadia Bolz-Weber, Bobbie Houston, and more, but they are all in sin. 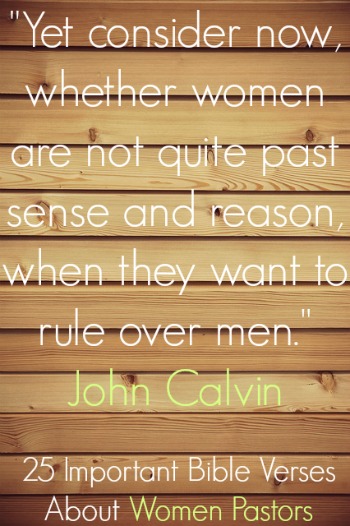 Scripture makes it clear that women are not to have spiritual authority over men. I’m not denying that female pastors can’t teach many things that are biblical and they might have even helped you, but each one of them has twisted Scripture to justify their sin and lust.

They can’t be trusted and God is not pleased. Let’s find out what the Bible teaches about this hot topic.

The conflict of the sexes was born out of the fall. Women would desire to rule over men, but men would instead rule. This is not only in marriage.

1. Genesis 3:15-16 “And I will cause hostility between you and the woman, and between your offspring and her offspring. He will strike your head, and you will strike his heel.” Then he said to the woman, “I will sharpen the pain of your pregnancy, and in pain you will give birth. And you will desire to control your husband, but he will rule over you.”

They were not made to be leaders in marriage or in the church. They are not lesser they just have different roles.

God is actually protecting women. There is a reason that women live longer than men. They have to go through less stress and pressure because of their God given role.

Subjection is a blessing for women. Women need a protector. Even though many women desire to be preachers they are not to. To do otherwise is to be in sin and to usurp the authority of man.

Many false teachers try to twist the Scriptures and say things like that is your interpretation. No! That is what it clearly says! No woman should teach in the public worship and service of the church.

2. 1 Timothy 2:12 “But I do not allow a woman to teach or exercise authority over a man, but to remain quiet.”

3. 1 Peter 3:7 “Likewise, husbands, live with your wives in an understanding way, showing honor to the woman as the weaker vessel, since they are heirs with you of the grace of life, so that your prayers may not be hindered.”

Not only that, it was Eve who was deceived by Satan, but sin entered through Adam and not Eve and we were saved by the second Adam Jesus Christ.

The husband is the leader and the protector. Instead of questioning Eve the one who sinned first, God questioned Adam the leader. Adam was the head of mankind and Eve was Adam’s responsibility. Eve tried to be the leader. She tried to do her own thing. She usurped Adam’s responsibility in leadership and she was deceived and he subjected himself to her deception. We should also note that Satan tempted Eve over Adam.

4. 1 Timothy 2:13-14 “For it was Adam who was first created, and then Eve. And it was not Adam who was deceived, but the woman being deceived, fell into transgression.”

6. 2 Corinthians 11:3 “But I am afraid that, as the serpent deceived Eve by his craftiness, your minds will be led astray from the simplicity and purity of devotion to Christ.”

7. Romans 5:12 “Therefore, just as sin entered the world through one man, and death through sin, and in this way death came to all people, because all sinned.”

Some women feel bad because a woman caused the fall. That stigma is there. It’s your fault. God made a solution  in 1 Timothy 2:15

Women have an essential role that they should never run from. The role of a woman in the church and in marriage is so great that Satan seeks to attack it with the feminist movement and rebellious women who infiltrate Christianity. Women will find true fulfillment through childbearing.

Women are given the responsibility of raising up godly children, which is essentially leading the human race to godliness. This is why Satan hates this so much! The godliness of a mother has the greatest impact on a child. There is a relationship between a mother and a child that is unlike any other. Why do you think this generation is getting worse?

Many women don’t want to pursue their godly role, but would rather throw their kids in daycare. Why would a woman want any other role when their role not only has a huge impact on their kids, but also the whole generation? Praise the Lord for your responsibility that will bring a blessing to this world.

9. 1 Timothy 2:15 “But women will be saved through childbearing–if they continue in faith, love and holiness with propriety.”

10. 1 Timothy 5:14 “So I counsel younger widows to marry, to have children, to manage their homes and to give the enemy no opportunity for slander.”

11. Proverbs 31:28 “Her children arise and call her blessed; her husband also, and he praises her.”

12. Titus 2:3-5 “Older women likewise are to be reverent in their behavior, not malicious gossips nor enslaved to much wine, teaching what is good, so that they may encourage the young women to love their husbands, to love their children, to be sensible, pure, workers at home, kind, being subject to their own husbands, so that the word of God will not be dishonored.”

Elders are always men in Scripture. 1 Tim:2 lets us know it is not culturally based like some may say.

13. 1 Timothy 3:8 “Deacons likewise must be men of dignity, not double-tongued, or addicted to much wine or fond of sordid gain.”

14. Titus 1:6 “An elder must be blameless, faithful to his wife, a man whose children believe and are not open to the charge of being wild and disobedient.”

15. 1 Timothy 3:2 “Therefore an overseer must be above reproach, the husband of one wife, sober-minded, self-controlled, respectable, hospitable, able to teach.”

16. 1 Timothy 3:12 “A deacon must be faithful to his wife and must manage his children and his household well.”

Feminism has infiltrated the church and it is wrong. Women in leadership is actually a sign of judgment from the Lord. This is really saying something.

17. Isaiah 3:12 “My people—infants are their oppressors, and women rule over them. O my people, your guides mislead you and they have swallowed up the course of your paths.”

There are many women who are searching passages to justify a female preacher, but you will never find any women preachers in the Bible. How about Priscilla and Phoebe?

There is no doubt that these were godly women who helped advance God’s kingdom, but there is nowhere in Scripture where it says that either of them pastored a church. They didn’t contradict the Scripture.

Phoebe was not a deaconesses which contradicts 1 timothy 3:8. Women were great helpers in the church, but never did they serve in positions of spiritual teaching authority in the church.

18. Acts 18:26 “He began to speak boldly in the synagogue. When Priscilla and Aquila heard him, they invited him to their home and explained to him the way of God more adequately.”

19. Romans 16:1 “I commend to you our sister Phoebe, a servant of the church at Cenchreae.”

20. Philippians 4:3 “Yes, I ask you also, true companion, help these women, who have labored side by side with me in the gospel together with Clement and the rest of my fellow workers, whose names are in the book of life.”

Women play an extremely important role in the church and women have many gifts, but they are to use them within God’s design.

God used a woman to plant the seed of the gospel in me. Was she shepherding over me? No, but she did proclaim the gospel message to me. Women are still able to use their gifts and tell people about Christ.

21. 1 Peter 3:15 “but in your hearts honor Christ the Lord as holy, always being prepared to make a defense to anyone who asks you for a reason for the hope that is in you; yet do it with gentleness and respect.”

One time someone tried to use Galatians 3:28 to justify their position, but that has nothing to do with roles in the church.

In context it is clearly talking about salvation in Jesus Christ. I was astonished that someone would actually try to use this verse to justify their position.

22. Galatians 3:28 “There is neither Jew nor Gentile, neither slave nor free, nor is there male and female, for you are all one in Christ Jesus.”

I heard a woman say that the Bible in Ephesians 5:25 says for a man to lay down his life for his wife.

She was twisting Scripture to justify herself and I was shocked that she would actually use this verse because if you go a verse back it says wives submit to your husbands in everything.

Ephesians 5 also says that a husband is the head of the wife. A man’s headship is an earthly manifestation of our heavenly Father’s leadership. Women can’t accomplish this nor were they designed to.

Should I leave a church with a woman pastor?

If this shows that they are not properly representing the Word of God why would you want to listen to them? If they are so dishonest about the text why would you let them shepherd you?

They can’t be trusted because to justify their position they would have to reinterpret everything. Can the blind lead the blind? You don’t want to go to a church like that. The Bible is as clear as day when it comes to women preachers. You should leave.

24. Romans 16:17-18 “Now I urge you, brothers and sisters, to watch out for those who create dissensions and obstacles contrary to the teaching that you learned. Avoid them! For these are the kind who do not serve our Lord Christ, but their own appetites. By their smooth talk and flattery they deceive the minds of the naive.”

25. 2 Peter 1:20-21 “Above all, you must understand that no prophecy of Scripture came about by the prophet’s own interpretation of things. For prophecy never had its origin in the human will, but prophets, though human, spoke from God as they were carried along by the Holy Spirit.”

Remember this does not mean that women are less than men. Even though Christ was sent by God was He any less than His Father? No. There are some women who do more for the kingdom of God than men. This just means that women are given a different role, but their role is very important.

Previous: Is Kanye West A Christian?

Next: Bible Verses About Wisdom