Scripture lets us know to stay away from evil women. They are greedy, rebellious, unsubmissive, wicked, adulterous, gossiping, slandering, and sexually immoral women. Bad wives and evil women in the Bible have done great damage such as lead Solomon astray, betray Samson, and order the killing of John the Baptist. 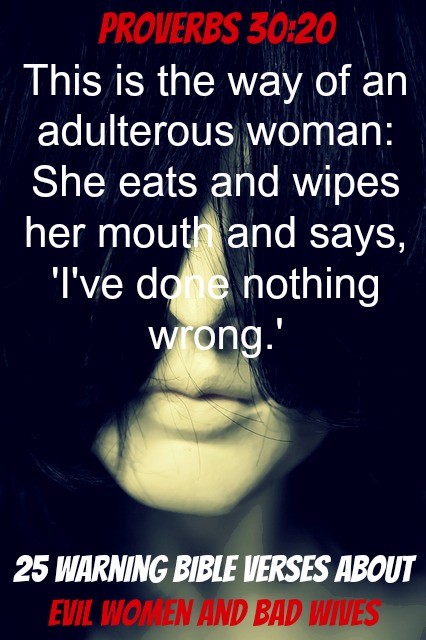 Evil women will cause Christian men to compromise and sin. They are on the wrong path and will bring you down with them. Beware!

In every nice-sized church there are worldly women put there by Satan to trap godly men.

They might profess to know Christ, but watch out. It doesn’t matter how beautiful she is.

It doesn’t matter if you think it’s love. If a woman is persuading you to sin or is giving signs that she will not be a submissive wife, end the relationship.

It is best for a Christian man to find a true Christian woman. Proverbs 31:12 “She will do him good and not evil all the days of her life.” What fellowship can light have with darkness?

She is going down the wrong path seeking men to bring down.

1. Proverbs 5:6 “For she cares nothing about the path to life. She staggers down a crooked trail and doesn’t realize it. So now, my sons, listen to me. Never stray from what I am about to say: Stay away from her! Don’t go near the door of her house!”

2. Proverbs 7:24-26 “Now then, my sons, listen to me; pay attention to what I say. Do not let your heart turn to her ways or stray into her paths. Many are the victims she has brought down; her slain are a mighty throng.”

3. Proverbs 21:19 “Better to live in a desert than with a quarrelsome and nagging wife.”

4. Proverbs 27:15-16 “A continual dripping on a rainy day and a contentious wife are alike. Trying to keep her in check is like stopping a wind storm or grabbing oil with your right hand.”

5. Proverbs 25:24 “It is better to live in a corner of the housetop than in a house shared with a quarrelsome wife.”

6. Proverbs 12:4 “A wife with strength of character is the crown of her husband, but the wife who disgraces him is like bone cancer.”

7. Proverbs 14:1 “A wise woman builds her home, but a foolish woman tears it down with her own hands.”

8. Proverbs 11:22 “A beautiful woman who lacks discretion is like a gold ring in a pig’s snout.”

She has a seductive, persuasive, and evil mouth.

9. Proverbs 5:3-4 “For the lips of an immoral woman are as sweet as honey, and her mouth is smoother than oil. But in the end she is as bitter as poison, as dangerous as a double-edged sword.”

10. Proverbs 2:16 “Wisdom will save you also from the adulterous woman, from the wayward woman with her seductive words.”

Evil in their hearts

12. Romans 1:26 “That is why God abandoned them to their shameful desires. Even the women turned against the natural way to have sex and instead indulged in sex with each other.”

Don’t run after her beauty.

13. Proverbs 6:23-29 “For their command is a lamp and their instruction a light; their corrective discipline is the way to life. It will keep you from the immoral woman, from the smooth tongue of a promiscuous woman. Don’t lust for her beauty. Don’t let her coy glances seduce you. For a prostitute will bring you to poverty,  but sleeping with another man’s wife will cost you your life. Can a man scoop a flame into his lap and not have his clothes catch on fire? Can he walk on hot coals and not blister his feet? So it is with the man who sleeps with another man’s wife. He who embraces her will not go unpunished.”

14. Proverbs 5:20 “Why be captivated, my son, by an immoral woman, or fondle the breasts of a promiscuous woman?”

15. Proverbs 7:8-12 “He was crossing the street near the house of an immoral woman, strolling down the path by her house. It was at twilight, in the evening, as deep darkness fell. The woman approached him, seductively dressed and sly of heart. She was the brash, rebellious type, never content to stay at home. She is often in the streets and markets, soliciting at every corner.”

16. Proverbs 23:27-28 “A prostitute is a dangerous trap; a promiscuous woman is as dangerous as falling into a narrow well. She hides and waits like a robber, eager to make more men unfaithful.”

17. Proverbs 30:20 “This is the way of an adulterous woman: She eats and wipes her mouth and says, I’ve done nothing wrong.”

18. Mark 10:12 “And if she divorces her husband and marries another, she commits adultery.”

19. 1 Timothy 5:13 “And if they are on the list, they will learn to be lazy and will spend their time gossiping from house to house, meddling in other people’s business and talking about things they shouldn’t.”

21. Judges 16:13-18 “Then Delilah said, “You’ve been making fun of me and telling me lies! Now tell me how you can be tied up securely.” Samson replied, “If you were to weave the seven braids of my hair into the fabric on your loom and tighten it with the loom shuttle, I would become as weak as anyone else.” So while he slept, Delilah wove the seven braids of his hair into the fabric. Then she tightened it with the loom shuttle. Again she cried out, “Samson! The Philistines have come to capture you!” But Samson woke up, pulled back the loom shuttle, and yanked his hair away from the loom and the fabric. Then Delilah pouted, “How can you tell me, ‘I love you,’ when you don’t share your secrets with me? You’ve made fun of me three times now, and you still haven’t told me what makes you so strong!” She tormented him with her nagging day after day until he was sick to death of it. Finally, Samson shared his secret with her. “My hair has never been cut,” he confessed, “for I was dedicated to God as a Nazirite from birth. If my head were shaved, my strength would leave me, and I would become as weak as anyone else.” Delilah realized he had finally told her the truth, so she sent for the Philistine rulers. “Come back one more time,” she said, “for he has finally told me his secret.” So the Philistine rulers returned with the money in their hands.”

22. Mark 6:23-27 “He even vowed, “I will give you whatever you ask, up to half my kingdom!” She went out and asked her mother, “What should I ask for?” Her mother told her, “Ask for the head of John the Baptist!” So the girl hurried back to the king and told him, “I want the head of John the Baptist, right now, on a tray!” Then the king deeply regretted what he had said; but because of the vows he had made in front of his guests, he couldn’t refuse her. So he immediately sent an executioner to the prison to cut off John’s head and bring it to him. The soldier beheaded John in the prison.”

23. Genesis 39:9-12 “No one here has more authority than I do. He has held back nothing from me except you, because you are his wife. How could I do such a wicked thing? It would be a great sin against God.” She kept putting pressure on Joseph day after day, but he refused to sleep with her, and he kept out of her way as much as possible. One day, however, no one else was around when he went in to do his work. She came and grabbed him by his cloak, demanding, “Come on, sleep with me!” Joseph tore himself away, but he left his cloak in her hand as he ran from the house.”

24. 1 Kings 21:25 “No one else so completely sold himself to what was evil in the Lord’s sight as Ahab did under the influence of his wife Jezebel.”

25. Isaiah 3:16-18 “The Lord says, “Beautiful Zion is haughty: craning her elegant neck, flirting with her eyes, walking with dainty steps, tinkling her ankle bracelets. So the Lord will send scabs on her head; the Lord will make beautiful Zion bald.” On that day of judgment the Lord will strip away everything that makes her beautiful: ornaments, headbands, crescent necklaces.”

Jeremiah 3:20 “But you have been unfaithful to me, you people of Israel! You have been like a faithless wife who leaves her husband. I, the LORD, have spoken.”