Not many subjects are so quick to spark controversy than that of gender roles within marriage. Especially right now in evangelicalism, the subject has been hotly debated. Let’s see what the Bible says about God’s design for wives. 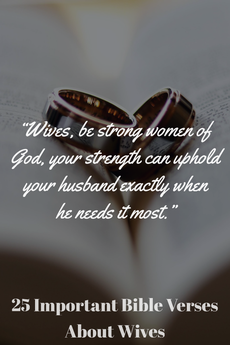 “Wives, be strong women of God, your strength can uphold your husband exactly when he needs it most.”

“A man’s best fortune, or his worst, is his wife.” – Thomas Fuller

“As a wife – devoted, As a mother – affectionate,
As a friend – our trust and love, In life – she exhibited all the graces of a Christian, In death – her redeemed spirit returned to God who gave it.”

“Happier is the wife who learns to hold on to Jesus tighter than she holds on to her husband.”

“The most profound gift a wife gives her husband is her respect & the greatest gift a husband gives his wife is to earn it.”

“The godly wife is a treasure to behold, a beauty to admire, a woman to be greatly cherished.”

God created the very first marriage in the Garden of Eden when He presented Eve to Adam. Woman was created to be a strong and suitable helper for man to join him in his labor. God designed man and woman equal in value, worth and dignity by creating them both as imago dei, in the image of God. But He gave them each unique and equally valuable roles to fulfill. These roles are to serve the family and church. They also serve as a visual illustration of the submission the church has to Christ, and that the Holy Spirit and Jesus have to God the Father.

1) Genesis 1:26-2 “Then God said, ‘Let Us make man in Our image, according to Our likeness; and let them rule over the fish of the sea and over the birds of the sky and over the cattle and over all the earth, and over every creeping thing that creeps on the earth.’ God created man in His own image, in the image of God He created him; male and female He created them.”

2) Genesis 2:18-24 “And the LORD God said, “It is not good that man should be alone; I will make him a helper comparable to him.” Out of the ground the LORD God formed every beast of the field and every bird of the air and brought them to Adam to see what he would call them. And whatever Adam called each living creature, that was its name. So, Adam gave names to all cattle, to the birds of the air, and to every beast of the field. But for Adam there was not found a helper comparable to him. And the LORD God caused a deep sleep to fall on Adam, and he slept; and He took one of his ribs and closed up the flesh in its place. Then the rib which the LORD God had taken from man He made into a woman, and He brought her to the man. And Adam said: ‘This is now bone of my bones and flesh of my flesh; she shall be called Woman, because she was taken out of Man.’ Therefore, a man shall leave his father and mother and be joined to his wife, and they shall become one flesh.”

3) Genesis 1:28 “Then God blessed them, and God said to them, “Be fruitful and multiply; fill the earth and subdue it; have dominion over the fish of the sea, over the birds of the air, and over every living thing that moves on the earth.”

Role of a wife in the Bible

The title given to woman was ‘Ezer. Which translates to strong helper. This is not a title of weakness. Ezer is only given to one other person in the whole Bible – the Holy Spirit. It is an honorable title.  Scripture says that a wife is to be her husband’s companion, to work alongside him in the work the Lord has set them to: the raising up of the next generation of believers. Then, when she is old, her duty is turned to mentoring the younger wives.

4) Ephesians 5:22-24 “Wives, submit to your own husbands, as to the Lord. For the husband is the head of the wife even as Christ is the head of the church, his body, and is himself its Savior. Now as the church submits to Christ, so also wives should submit in everything to their husbands.”

5) 1 Timothy 5:14 “So I would have younger widows marry, bear children, manage their households, and give the adversary no occasion for slander.”

6) Mark 10:6-9 “But from the beginning of creation, ‘God made them male and female.’ ‘Therefore a man shall leave his father and mother and hold fast to his wife, and the two shall become one flesh.’ So they are no longer two but one flesh. What therefore God has joined together, let not man separate.”

7) Titus 2:4-5 And so train the young women to love their husbands and children, to be self-controlled, pure, working at home, kind, and submissive to their own husbands, that the word of God may not be reviled.

8) 1 Timothy 2:11-14 “Let a woman learn quietly with all submissiveness. I do not permit a woman to teach or to exercise authority over a man; rather, she is to remain quiet. For Adam was formed first, then Eve; and Adam was not deceived, but the woman was deceived and became a transgressor.”

9) 1 Corinthians 7:2 “But because of the temptation to sexual immorality, each man should have his own wife and each woman her own husband.”

Scripture says that the way a wife is to love her husband is to submit – to rank herself under him – and to respect him. Submit does not mean she is less than in any regard – simply, she has roles to fulfill under his authority. It is by her gentle spirit and respect that she best communicates love to her husband. 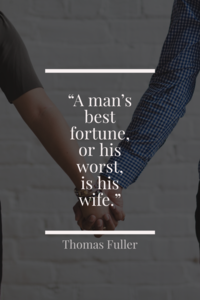 10) 1 Peter 3:1-5 “Wives, in the same way submit yourselves to your own husbands so that, if any of them do not believe the word, they may be won over without words by the behavior of their wives,  when they see the purity and reverence of your lives.  Your beauty should not come from outward adornment, such as elaborate hairstyles and the wearing of gold jewelry or fine clothes. Rather, it should be that of your inner self, the unfading beauty of a gentle and quiet spirit, which is of great worth in God’s sight.”

11) Hebrews 13:4 “Let marriage be held in honor among all, and let the marriage bed be undefiled, for God will judge the sexually immoral and adulterous.”

There is absolutely no room in these passages for a husband to be emotionally, verbally, or physically abusive. The authority a husband has is that of a servant-leader. He is to love her selflessly, considering her heart. Even if it means dying to his plans, dreams, and goals – he is to put her before himself. For a husband to mistreat his wife is for him to violate Scripture and sin against her and God. A woman must never submit to anything that violates her conscience or Scripture. And for him to ask her to is mistreating her as well as asking her to sin against God.

13) 1 Peter 3:7 “Husbands, in the same way be considerate as you live with your wives, and treat them with respect as the weaker partner and as heirs with you of the gracious gift of life, so that nothing will hinder your prayers.”

14) Ephesians 5:28-33 “In this same way, husbands ought to love their wives as their own bodies. He who loves his wife loves himself. 29 After all, no one ever hated their own body, but they feed and care for their body, just as Christ does the church— 30 for we are members of his body. 31 “For this reason a man will leave his father and mother and be united to his wife, and the two will become one flesh.” 32 This is a profound mystery—but I am talking about Christ and the church. 33 However, each one of you also must love his wife as he loves himself, and the wife must respect her husband.”

15) 1 Peter 3:7 “Likewise, husbands, live with your wives in an understanding way, showing honor to the woman as the weaker vessel, since they are heirs with you of the grace of life, so that your prayers may not be hindered.”

The most important thing that a wife can do for her husband is to pray for him. He will have no other better spiritual partner than that of his wife.

18) 1 Samuel 1:15-16 “Not so, my lord,” Hannah replied, “I am a woman who is deeply troubled. I have not been drinking wine or beer; I was pouring out my soul to the Lord. 16 Do not take your servant for a wicked woman; I have been praying here out of my great anguish and grief.”

19) Philippians 4:6 “Do not be anxious about anything, but in everything by prayer and supplication with thanksgiving let your requests be made known to God.”

The Bible says that finding a wife is a good thing! It also elaborates in Proverbs 31 about the kind of wife a husband should seek to find.

20) Proverbs 19:14 “House and wealth are inherited from fathers, but a prudent wife is from the Lord.”

Wives in the Bible

The Bible is full of notable wives. Sarah submitted to her husband, even when he made mistakes. She trusted God and lived her life in a way that reflected she did.

23)  Genesis 24:67 “Then Isaac brought her into the tent of Sarah his mother and took Rebekah, and she became his wife, and he loved her. So Isaac was comforted after his mother’s death.”

24) 1 Peter 3:6 “For this is the way the holy women of the past who put their hope in God used to adorn themselves. They submitted themselves to their own husbands, like Sarah, who obeyed Abraham and called him her lord. You are her daughters if you do what is right and do not give way to fear.”

25) 2 Chronicles 22:11 “But Jehosheba, the daughter of King Jehoram, took Joash son of Ahaziah and stole him away from among the royal princes who were about to be murdered and put him and his nurse in a bedroom. Because Jehosheba, the daughter of King Jehoram and wife of the priest Jehoiada, was Ahaziah’s sister, she hid the child from Athaliah so she could not kill him.”

Marriage is a wonderful gift from God and we should seek to glorify Him in the way we live out our marriage. Let us support wives and encourage them to grow in their faith.

Next: The Second Coming Of Jesus Christ