Prostitution is one of the oldest forms of dishonest gain in the world. We always hear about women prostitutes, but there are even male prostitutes as well. Scripture tells us that they will not enter into Heaven. 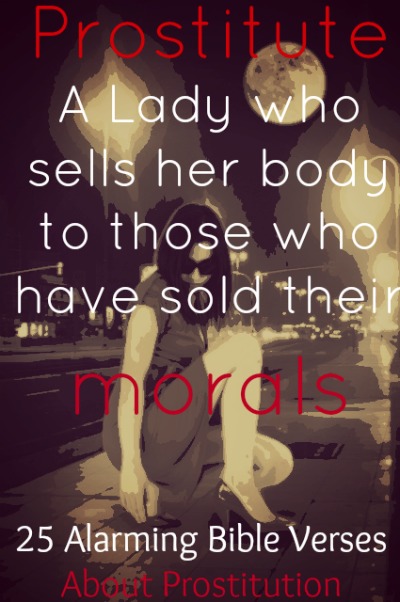 Prostitution has become so huge that it has even gone online. Craigslist and Back Page are considered online street corners for prostitutes.

Christians are told to stay away from this sinful lifestyle because it is immoral, illegal, and very dangerous.

Your body is God’s temple and God did not make us to defile our body in any way.

Going to a prostitute is just as bad as being a prostitute. James 1:15 But each person is tempted when he is lured and enticed by his own desire. Stay clear of sexual immorality.

Is there hope for prostitutes? Will God forgive them? Scripture never says prostitution is the worst sin. In fact, there are believers in Scripture who were former prostitutes.

The blood of Christ covers all sins. Jesus took away our shame on the cross. If a prostitute will turn from their sins and trust in Christ for salvation, eternal life is theirs.

2. Romans 13:1-2 Let every soul be subject unto the higher powers. For there is no power but of God: the powers that be are ordained of God. Whosoever therefore resisteth the power, resisteth the ordinance of God: and they that resist shall receive to themselves damnation.

3. Leviticus 19:29 Do not defile your daughter by making her a prostitute, or the land will be filled with prostitution and wickedness.

4. Leviticus 21:9 If a priest’s daughter defiles herself by becoming a prostitute, she also defiles her father’s holiness, and she must be burned to death.

5. Deuteronomy 23:17 No Israelite, whether man or woman, may become a temple prostitute.

One with a prostitute!

7. 1 Corinthians 6:18 Flee fornication. Every sin that a man doeth is without the body; but he that committeth fornication sinneth against his own body.

8. Galatians 5:19 Now the works of the flesh are obvious: sexual immorality, impurity, depravity.

9. 1 Thessalonians 4:3-4 It is God’s will that you keep away from sexual sin as a mark of your devotion to him. Each of you should know that finding a husband or wife for yourself is to be done in a holy and honorable way.

10. Proverbs 22:14 The mouth of an adulterous woman is a deep pit; a man who is under the LORD’s wrath falls into it.

11. Proverbs 23:27-28 for a prostitute is like a deep pit; a harlot is like a narrow well. Indeed, she lies in wait like a robber, and increases the unfaithful among men.

12. Proverbs 2:15-16 Whose paths are crooked and who are devious in their ways. Wisdom will save you also from the adulterous woman, from the wayward woman with her seductive words.

13. Proverbs 5:3-5 For the lips of the adulterous woman drip honey, and her seductive words are smoother than olive oil, but in the end she is bitter as wormwood, sharp as a two-edged sword. Her feet go down to death; her steps lead straight to the grave.

God does not accept prostitution money.

14. Deuteronomy 23:18 When you are bringing an offering to fulfill a vow, you must not bring to the house of the Lord your God any offering from the earnings of a prostitute, whether a man or a woman, for both are detestable to the Lord your God.

15. Proverbs 10:2 Tainted wealth has no lasting value, but right living can save your life.

16. Luke 8:17 For all that is secret will eventually be brought into the open, and everything that is concealed will be brought to light and made known to all.

Dressing like one: Godly women should not dress sensually.

17. Proverbs 7:10 Then out came a woman to meet him, dressed like a prostitute and with crafty intent.

18. 1 Timothy 2:9 Likewise also that women should adorn themselves in respectable apparel, with modesty and self-control, not with braided hair and gold or pearls or costly attire,

Turn away from prostitution, repent, trust in Jesus as your Lord and Savior alone.

19. Matthew 21:31-32 “Which of the two obeyed his father?” They replied, “The first.” Then Jesus explained his meaning: “I tell you the truth, corrupt tax collectors and prostitutes will get into the Kingdom of God before you do. For John the Baptist came and showed you the right way to live, but you didn’t believe him, while tax collectors and prostitutes did. And even when you saw this happening, you refused to believe him and repent of your sins.

20. Hebrews 11:31 It was by faith that Rahab the prostitute was not destroyed with the people in her city who refused to obey God. For she had given a friendly welcome to the spies.

21. 2 Corinthians 5:17 Therefore, if anyone is in Christ, the new creation has come: The old has gone, the new is here!

22. Genesis 38:15 When Judah saw her, he thought she was a prostitute, for she had covered her face.

24. 1 Kings 3:16 Then two women who were harlots came to the king and stood before him.

25. Ezekiel 23:11 “Yet even though Oholibah saw what had happened to Oholah, her sister, she followed right in her footsteps. And she was even more depraved, abandoning herself to her lust and prostitution.