The sin of unforgiveness puts many people on the path to hell. If God can forgive you for your deepest darkest sins why can’t you forgive others for the smallest things? You repent and ask God to forgive you, but you can’t do the same. The things people don’t want to forgive others for are things they have done themselves. He slandered me I can’t forgive Him. Well have you ever slandered someone before? 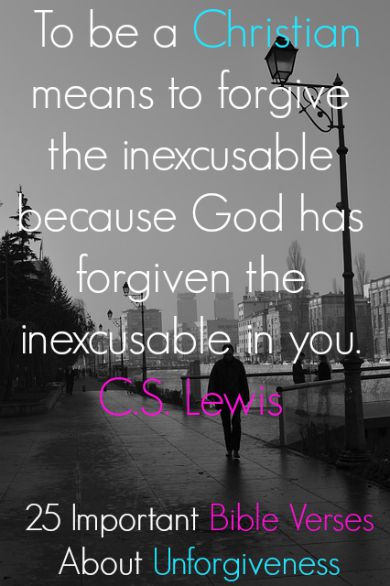 How about the things you think in your mind towards someone when they make you mad. Evidence of true faith in Christ is that your life and way of thinking will change. We are forgiven much so we must forgive much. Pride is the main reason for people holding grudges.

There are no exceptions. Did King Jesus hold a grudge? He had every right to, but He didn’t. Scripture tells us to love and forgive everyone even our enemies. Love does no harm and it overlooks an offense.

Love does not keep bringing up old conflicts while trying to hide it behind a joke. When you hold on to things in your heart it creates bitterness and hate. God does stop listening to prayers because of unforgiveness. I know sometimes it is hard, but confess your sins, lose the pride, ask for help, and be forgiving. Don’t go to sleep with anger. Unforgiveness never hurts the other person. It only hurts you. Cry out to God and allow Him to work in you to remove anything harmful that is brewing in your heart.

If God can forgive you for such a huge debt why can’t you forgive others?

1. Matthew 18:23-35 “Therefore, the Kingdom of Heaven can be compared to a king who decided to bring his accounts up to date with servants who had borrowed money from him. In the process, one of his debtors was brought in who owed him millions of dollars. He couldn’t pay, so his master ordered that he be sold—along with his wife, his children, and everything he owned—to pay the debt. “But the man fell down before his master and begged him, ‘Please, be patient with me, and I will pay it all. Then his master was filled with pity for him, and he released him and forgave his debt. “But when the man left the king, he went to a fellow servant who owed him a few thousand dollars. He grabbed him by the throat and demanded instant payment. “His fellow servant fell down before him and begged for a little more time. ‘Be patient with me, and I will pay it,’ he pleaded. But his creditor wouldn’t wait. He had the man arrested and put in prison until the debt could be paid in full. “When some of the other servants saw this, they were very upset. They went to the king and told him everything that had happened. Then the king called in the man he had forgiven and said, ‘You evil servant! I forgave you that tremendous debt because you pleaded with me. Shouldn’t you have mercy on your fellow servant, just as I had mercy on you? Then the angry king sent the man to prison to be tortured until he had paid his entire debt. “That’s what my heavenly Father will do to you if you refuse to forgive your brothers and sisters from your heart.”

2. Colossians 3:13 Be tolerant of one another and forgive each other if anyone has a complaint against another. Just as the Lord has forgiven you, you also should forgive.

3. 1 John 1:9 If we confess our sins, He is faithful and righteous to forgive us our sins and to cleanse us from all unrighteousness.

4. Matthew 18:21-22 Then Peter came to Jesus and said, “Lord, how many times may my brother sin against me and I forgive him, up to seven times?” Jesus said to him, “I tell you, not seven times but seventy times seven!

5. Leviticus 19:17-18 Do not bear a grudge against others, but settle your differences with them, so that you will not commit a sin because of them. Do not take revenge on others or continue to hate them, but love your neighbors as you love yourself. I am the Lord.

6. Mark 11:25 And when you stand and pray, forgive anything you may have against anyone, so that your Father in heaven will forgive the wrongs you have done.”

Don’t give Satan an opportunity.

9. 2 Corinthians 2:10-11 When you forgive someone, I do, too. Indeed, what I have forgiven—if there was anything to forgive—I did in the presence of the Messiah for your benefit, so that we may not be outsmarted by Satan. After all, we are not unaware of his intentions.

10. Ephesians 4:26-27 Be angry, yet do not sin.” Do not let the sun set while you are still angry, and do not give the Devil an opportunity to work.

Leave it all up to the Lord.

12. Romans 12:19 Don’t take revenge, dear friends. Instead, let God’s anger take care of it. After all, Scripture says, “I alone have the right to take revenge. I will pay back, says the Lord.”

Unforgiveness leads to bitterness and hatred.

13. Hebrews 12:15 See to it that no one fails to obtain the grace of God and that no bitter root grows up and causes you trouble, or many of you will become defiled.

Unforgiveness reveals how you feel about Christ.

15. John 14:24 The one who doesn’t love Me will not keep My words. The word that you hear is not Mine but is from the Father who sent Me.

Unforgiveness is one of the reasons for unanswered prayers.

16. John 9:31 We know that God doesn’t listen to sinners, but if anyone is devout and does his will, God listens to him.

When you won’t forgive because of pride.

17. Proverbs 16:18 Pride goeth before destruction, and an haughty spirit before a fall.

18. Proverbs 29:23 Your pride can bring you down. Humility will bring you honor.

19. Matthew 5:44 But I tell you this: Love your enemies, and pray for those who persecute you.

21. Proverbs 10:12 Hatred stirs up conflict, but love covers over all wrongs.

22. Romans 8:13-14 For if you live according to the flesh, you are going to die. But if by the Spirit you put to death the deeds of the body, you will live. All those led by God’s Spirit are God’s sons.

23. Romans 12:2 Do not be conformed to this world, but be transformed by the renewal of your mind, that by testing you may discern what is the will of God, what is good and acceptable and perfect.

Unforgiveness has caused many people to go to hell. Is it really worth it?

Next: Bible Verses About Fearing God