Lions are fascinating creatures. We marvel at their brute strength. We are intrigued by their petrifying roars that can be heard 5 miles away. 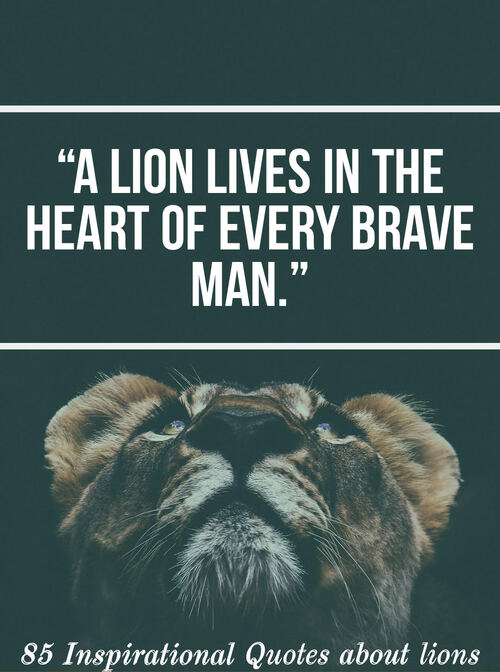 We are captivated by their characteristics. Below we will learn more about how we can implement lion traits into our daily lives.

1. “Do what you fear and your fears disappear”

3. “A lion sleeps in the heart of every brave man.”

4. “A lion doesn’t concern himself with the opinion of sheep.”

5. “The lion does not turn around when a small dog barks.”

6. “The greatest fear in the world is of the opinions of others. And the moment you are unafraid of the crowd you are no longer a sheep, you become a lion. A great roar arises in your heart, the roar of freedom.”

7. “A fierce wolf is greater than a cowardly lion.”

8. “There never was a woman like her. She was gentle as a dove and brave as a lioness.”

9. “A lion does not fear at laughter coming from a hyena.”

There are several lion leadership qualities that we can learn from. Lions are courages, confident, strong, social, organized, and hardworking. 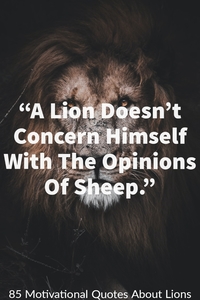 Lions implement intelligent tactics when they hunt. What leadership quality of a lion can you grow in?

15. “Be like a lion and a wolf, then you have a big heart and the power of leadership.”

17. “If size mattered, the elephant would be the king of the jungle.”

In African cultural history, the lion symbolizes strength, power, and authority. An adult male lion can weight 500 pounds and grow to 10 feet in length. One strike of a lion’s paw can deliver 400 pounds of brutal force. Use these quotes to strengthen and encourage you in whatever walk that you are in.

18. “The lion is an emblem of the dream of absolute power — and, as a wild rather than a domestic animal, he belongs to a world outside the realm of society and culture.”

24. “Surround yourself with those on the same mission as you.”

25. “The power of a lion is not in its size, in its capability and strength”

26. “Although I walk with grace, I have a mighty roar. A healthy woman is much like a lion: strong life force, life-giving, territoriality aware, fiercely loyal and wisely intuitive. This is who we are.”

27. “A lion doesn’t have to prove it’s a threat. You already know what the lion is capable of.”

No matter the strength of a lion, it is no match for the strength of God. When Daniel was in the lion’s den God shut the mouth of this mighty animal revealing His authority over lions. God provides food for the lions. This should give us so much comfort. How much more will He provide and be there for us! The Lord is sovereign over the universe. Christians are strong because our strength comes from God and not ourselves.

28. Daniel 6:27 “He rescues and he saves; he performs signs and wonders in the heavens and on the earth. He has rescued Daniel from the power of the lions.”

30. Psalm 22:20-21 “Save my life from violence, my sweet life from the teeth of the wild dog. 21 Rescue me from the mouth of the lion. From the horns of the wild oxen, You responded to my plea.”

Lions are mentioned in several passages in the Bible for their boldness, strength, ferociousness, stealth, and more.

32. Proverbs 28:1 “The wicked flee though no one pursues, but the righteous are as bold as a lion.”

33. Revelation 5:5 “Then one of the elders said to me, “Do not weep! See, the Lion of the tribe of Judah, the Root of David, has triumphed. He is able to open the scroll and its seven seals.”

34. Proverbs 30:30 “The lion which is mighty among beasts And does not retreat before any.”

35. Joshua 1:9 “Have I not commanded you? Be strong and courageous. Do not be afraid; do not be discouraged, for the Lord your God will be with you wherever you go.”

37. Judges 14:18 “So before sundown on the seventh day, the men of the city said to him, “What is sweeter than honey? What is stronger than a lion?” Samson replied, “If you hadn’t used my cow to plow, you wouldn’t know my riddle now.”

Quotes from the Lion King

There are a plethora of Lion King quotes that can be used to help our walk of faith. One of the most powerful quotes was when Mufasa told Simba “remember who you are.” This should remind Christians to remember who they are. Remember who is living inside you and remember who goes before you!

38. “There’s more to being king than getting your way all the time.” -Mufasa

39. “Oh yes, the past can hurt. But from the way I see it, you can either run from it or learn from it.” Rafiki

43. “I’m only brave when I have to be. Being brave doesn’t mean you go looking for trouble.” Mufasa

Lions are fighters!  If a lion receives a scar from hunting it doesn’t quit. Lions keep on moving and keep on hunting. 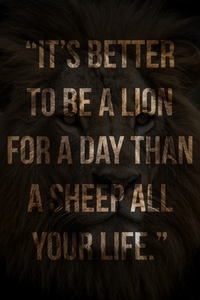 Don’t allow your scars to stop you from fighting. Get up and fight again.

45. “Courage doesn’t always roar. Sometimes courage is the little voice at the end of the day that says I’ll try again tomorrow.”

50. “The strongest hearts have the most scars.

52. “Rise and rise again, till lambs become lions. Never give up!”

54. “The silent breath of a wounded lion is more dangerous than its roar.”

Diligence in work always to success. We all can all learn from the hardworking nature of a lion.

60. “Every morning in Africa, a gazelle wakes up, it knows it must outrun the fastest lion or it will be killed. … It knows it must run faster than the slowest gazelle, or it will starve. It doesn’t matter whether you’re the lion or a gazelle-when the sun comes up, you’d better be running.”

61. “Attack your goals like your life depends on it.”

62. “Everyone wants to eat, but few are willing to hunt.”

64. “Focus.. Hard work without focus is just a waste of your energy. Focus like the lion waiting for the deer. Sitting casually but eyes fixed on the deer. When the time is apt it just takes over. And rests for the rest of the week not having to hunt.”

65. “The one excellent thing that can be learned from a lion is that whatever a man intends doing should be done by him with a whole-hearted and strenuous effort.” Chanakya

The patience of lions

Lion have to use both patience and stealth to catch their prayer. They are one of the most meticulous animals in the wild. Let’s learn from their patience, which will help us to achieve different goals in life.

68. “The lion teaches to avoid confrontation, but to stand up fiercely when necessary. It is through the strength of love, gentleness, and patience that the lion holds its community together. ”

69. “The lions taught me photography. They taught me patience and the sense of beauty, a beauty that penetrates you.”

71. “I walk like a lioness, waiting patiently for the right opportune moment, to hunt success from the jaws of defeat.”

72. “The Word of God is like a lion. You don’t have to defend a lion. All you have to do is let the lion loose, and the lion will defend itself.” – Charles Spurgeon

73. “The truth is like a lion; you don’t have to defend it. Let it loose; it will defend itself.”
Saint Augustine

74. “Satan may roar; but my defender is the Lion of Judah, and He will fight for me!”

75. “My God’s not dead He’s surely alive, He’s living on the inside roaring like a lion.”

76. “You may see all my weaknesses but look closer for I have a Lion living within me who is Christ Jesus.”

77. “Let your faith roar so loud that you can’t hear what doubt is saying.”

78. “The Lion of the tribe of Judah will soon drive away all his adversaries.” – C.H. Spurgeon

79. “Let the pure gospel go forth in all its lion-like majesty, and it will soon clear its own way and ease itself of its adversaries.” Charles Spurgeon

80. “Servanthood does not nullify leadership; it defines it. Jesus does not cease to be the Lion of Judah when He becomes the lamblike servant of the church.” — John Piper

81. “The fear of God is the death of every other fear; like a mighty lion, it chases all other fears before it.” — Charles H. Spurgeon

82. “A Praying man is as bold as a lion, there is no demon in hell that will scare him!” David Wilkerson

83. “Trying to prove God is like defending a lion. It doesn’t need your help – just unlock the cage.”

85. “The Bible says that the devil is like a roaring lion (1 Peter 5:8). He comes in the darkness, and tries to frighten the children of God with his mighty roar. But when you switch on the light of the Word of God, you discover that there is no lion. There is only a mouse with a microphone! The devil is an imposter. Got it?”

Previous: Is Kanye West A Christian?

Next: Bible Verses About Wisdom