Surprisingly while the Bible does give references to dogs, you will not find anything about cats in the Bible. I’m sorry cat lovers. However, God showed me something amazing the other day. All cats belong to the same feline family. 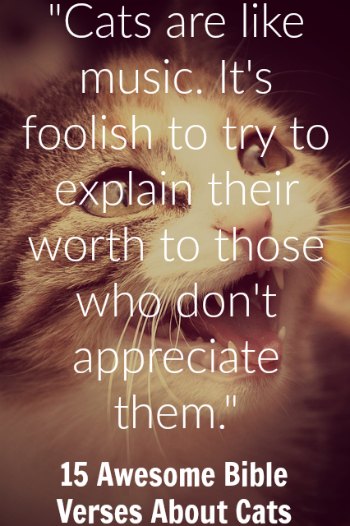 There are 36 or 37 species of cats. Lions and cats are in the same family. We must learn to see the gospel or Jesus everywhere in life.

Compared to dogs we usually think of cats as inferior in terms of strength, intelligence, usefulness, etc.

Sadly, there are some people who don’t see the great value in a cat. In a sense, cats can be unwanted and rejected by some in society. Don’t you see Christ? Cats are seen as timid small animals.

Who would think that these animals would be in the same family as a lion? Lions are called the “King of Beasts” or the “King of the Jungle.”

They are at the top of the food chain. They are known for their boldness, majestic appearance, power, and strength. Cats are in the same family as the “King of Beasts.”

Rahab is a great-grandmother of Jesus. Before Rahab was saved she was a prostitute. On top of being a harlot she was a Canaanite. Canaanites were enemies of Israel. Harlots are rejected by society.

They are treated as inferior to others. Don’t you see the loving humility of God? Only God in His humility would present the Savior of the world through a harlot. Who would think that Jesus the King of the world would be in the same family as Rahab? Who would think that a lion the “King of Beasts” would be in the same family as a cat?

I find that incredible. Although there is not much we can say about cats, allow this to inspire you. Look for a picture of Christ everywhere in the world and everywhere in your life.

Psalm 73 in the NLT is the only place where you will find the word cat in the Bible.

1. Psalm 73:6-8 They wear pride like a jeweled necklace and clothe themselves with cruelty. These fat cats have everything their hearts could ever wish for! They scoff and speak only evil; in their pride they seek to crush others.

2. Isaiah 34:14 Wildcats shall meet with hyenas, goat-demons shall call to each other; there too Lilith shall repose, and find a place to rest.

3. Job 4:10  The lion roars and the wildcat snarls, but the teeth of strong lions will be broken.

Lions in the Bible.

4. Judges 14:18  So the men of the city said to him on the seventh day before the sun went down, “What is sweeter than honey? And what is stronger than a lion?” And he said to them, “If you had not plowed with my heifer, You would not have found out my riddle.”

5. Proverbs 30:29-30 There be three things which go well, yea, four are comely in going: A lion which is strongest among beasts, and turneth not away for any.

6. Zechariah 11:3  Listen to the wail of the shepherds; their rich pastures are destroyed! Listen to the roar of the lions; the lush thicket of the Jordan is ruined!

7. Jeremiah 2:15  Lions have roared; they have growled at him. They have laid waste his land; his towns are burned and deserted.

8. Hebrews 11:33-34 By faith these people overthrew kingdoms, ruled with justice, and received what God had promised them. They shut the mouths of lions, quenched the fury of the flames, and escaped the edge of the sword; whose weakness was turned to strength; and who became powerful in battle and routed foreign armies.

9. Habakkuk 1:8  Their horses are swifter than leopards, fiercer than wolves at dusk. Their cavalry gallops headlong; their horsemen come from afar. They fly like an eagle swooping to devour.

11. Isaiah 11:6 The wolf will live with the lamb, the leopard will lie down with the goat, the calf and the lion and the yearling together; and a little child will lead them.

God cares about all animals. He loves house pets and provides for them often through us.

13. Psalm 104:20-24 You bring darkness, and it becomes night, when all the forest animals stir. The young lions roar for their prey and seek their food from God. The sun rises; they go back and lie down in their dens. Man goes out to his work and to his labor until evening. How countless are Your works, Lord! In wisdom You have made them all; the earth is full of Your creatures.

15. Psalm 50:10-12 Indeed, every animal of the forest is mine, even the cattle on a thousand hills. I know all the birds in the mountains; indeed, everything that moves in the field is mine. “If I were hungry, I would not tell you; for the world is mine along with everything in it.”