We love our dogs, cats, birds, turtles, but God loves them as well. Not only does He love pets, but God loves all animals. We never take the time to recognize God’s awesome creation. Animals can love, they can grieve, they get excited, etc. In a way they are just like us. Animals show us how God loves us as well. When you see a lion protecting his cub that shows how God will protect us. 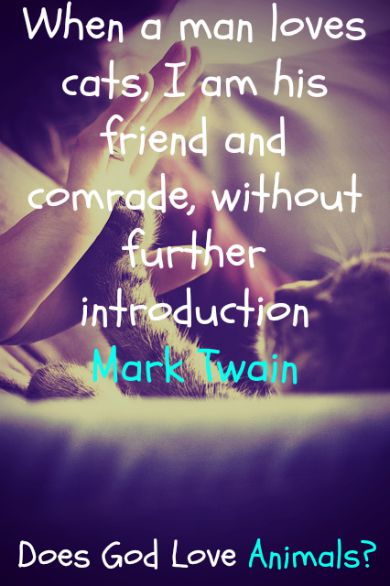 When you see a bird providing for her chicks that shows how God will provide for us. God wants us to take care of His animals. Just like He loves them He wants us to be a reflection of Him and love them as well.

God created animals for His glory.

Revelation 4:11 “Our Lord and God, you deserve to receive glory, honor, and power because you created everything. Everything came into existence and was created because of your will.”

God was pleased with His creation.

God made His covenant not only for Noah, but for animals as well.

God claims animals for Himself.

Psalm 50:10-11 For every beast of the forest is mine, and the cattle upon a thousand hills. I know all the fowls of the mountains: and the wild beasts of the field are mine.

God hears the cries of animals. He has compassion over them and provides for them.

Psalm 145:15-17 The eyes of all creatures look to you,and you give them their food at the proper time. You open your hand, and you satisfy the desire of every living thing. The Lord is fair in all his ways and faithful in everything he does.

Psalm 136:25 He gives food to every creature. His love endures forever.

Job 38:41 Who provideth for the raven his food? when his young ones cry unto God, they wander for lack of meat.

Psalm 147:9 He giveth to the beast his food, and to the young ravens which cry.

Luke 12:4-7 “My friends, I can guarantee that you don’t need to be afraid of those who kill the body. After that they can’t do anything more. I’ll show you the one you should be afraid of. Be afraid of the one who has the power to throw you into hell after killing you. I’m warning you to be afraid of him. “Aren’t five sparrows sold for two cents? God doesn’t forget any of them. Even every hair on your head has been counted. Don’t be afraid! You are worth more than many sparrows.”

God cares about animals and their rights.

Numbers 22:27-28 When the donkey saw the angel of the LORD, it lay down under Balaam, and he was angry and beat it with his staff. Then the LORD opened the donkey’s mouth, and it said to Balaam, “What have I done to you to make you beat me these three times?”

God wants us to respect and take care of animals.

Proverbs 12:10  A righteous man regardeth the life of his beast: but the tender mercies of the wicked are cruel.

Animals in Heaven show how much God loves them.

Isaiah 11:6-9 Wolves will live with lambs. Leopards will lie down with goats. Calves, young lions, and year-old lambs will be together, and little children will lead them. Cows and bears will eat together.  Their young will lie down together. Lions will eat straw like oxen. Infants will play near cobras’ holes. Toddlers will put their hands into vipers’ nests. They will not hurt or destroy anyone anywhere on my holy mountain. The world will be filled with the knowledge of the Lord like water covering the sea.

Previous: The Bible Vs The Book Of Mormon

Next: Bible Verses About Selfishness