Many Christians wonder is hunting a sin? The answer is no. God gave us animals for food, transportation, etc. The big question in the minds of many believers, is it wrong to hunt for fun? I will explain more about this below. 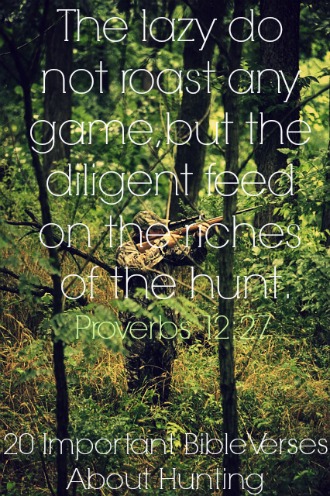 From the beginning man was put in charge. God told man to rule over the earth and subdue it.

1. Genesis 1:28-30 God blessed them and said to them, “Be fruitful and increase in number; fill the earth and subdue it. Rule over the fish in the sea and the birds in the sky and over every living creature that moves on the ground.” Then God said, “I give you every seed-bearing plant on the face of the whole earth and every tree that has fruit with seed in it. They will be yours for food. And to all the beasts of the earth and all the birds in the sky and all the creatures that move along the ground—everything that has the breath of life in it—I give every green plant for food.” And it was so.

2. Psalm 8:6-8 You made them rulers over the works of your hands; you put everything under their feet: all flocks and herds, and the animals of the wild, the birds in the sky, and the fish in the sea, all that swim the paths of the seas.

God gave the animals for food.

3. Genesis 9:1-3 And God blessed Noah and his sons and said to them, “Be fruitful and multiply, and fill the earth. The fear of you and the terror of you will be on every beast of the earth and on every bird of the sky; with everything that creeps on the ground, and all the fish of the sea, into your hand they are given. Every moving thing that is alive shall be food for you; I give all to you, as I gave the green plant.

4. Psalm 104:14-15 You cause grass to grow for the livestock and plants for people to use. You allow them to produce food from the earth wine to make them glad, olive oil to soothe their skin, and bread to give them strength.

There was definitely hunting in Scripture.

6. Proverbs 12:27 The slothful man roasteth not that which he took in hunting: but the substance of a diligent man is precious.

Animal skin was used as clothing.

7. Genesis 3:21 And the Lord God made clothing from animal skins for Adam and his wife.

8. Matthew 3:4 John’s clothes were made of camel’s hair, and he had a leather belt around his waist. His food was locusts and wild honey.

9. Genesis 27:15-16 Then Rebekah took the best clothes of Esau her older son, which she had in the house, and put them on her younger son Jacob. She also covered his hands and the smooth part of his neck with the goatskins.

10. Numbers 31:20 Purify every garment as well as everything made of leather, goat hair or wood.”

Many people consider fishing as a form of hunting and the disciples fished.

11. Matthew 4:18-20 And Jesus, walking by the Sea of Galilee, saw two brothers, Simon called Peter, and Andrew his brother, casting a net into the sea; for they were fishermen. Then He said to them, “Follow Me, and I will make you fishers of men.” They immediately left their nets and followed Him.

12. John 21:3-6 “I’m going out to fish,” Simon Peter told them, and they said, “We’ll go with you.” So they went out and got into the boat, but that night they caught nothing. Early in the morning, Jesus stood on the shore, but the disciples did not realize that it was Jesus. He called out to them, “Friends, haven’t you any fish?” “No,” they answered. He said, “Throw your net on the right side of the boat and you will find some.” When they did, they were unable to haul the net in because of the large number of fish.

The Scriptures talk about skilled hunters and men who killed animals.

13. 1 Samuel 17:34-35 But David said to Saul, “Your servant has been keeping his father’s sheep. When a lion or a bear came and carried off a sheep from the flock, I went after it, struck it and rescued the sheep from its mouth. When it turned on me, I seized it by its hair, struck it and killed it.

15. Genesis 25:27-28 The boys grew up, and Esau became a skillful hunter, a man of the open country, while Jacob was content to stay at home among the tents. Isaac, who had a taste for wild game, loved Esau, but Rebekah loved Jacob.

The problem is not if it is OK to hunt for food. Scripture clearly shows we can. Is hunting for sport a sin?

This is the huge problem for many people. Nothing in Scripture says we can hunt for fun and nothing says that we can’t hunt for fun. Hunting for sport should be thoroughly prayed about and we should be fully convinced. If you are having doubts you should not do it.

16. Romans 14:23 But whoever has doubts is condemned if they eat, because their eating is not from faith; and everything that does not come from faith is sin.

Sport hunting does benefit in keeping the population of some animals in check.

17. Deuteronomy 7:22 The LORD your God will drive out those nations before you, little by little. You will not be allowed to eliminate them all at once, or the wild animals will multiply around you.

Something to take into consideration is that God loves animals. God gave us animals for our needs not to abuse. We should really think hard about this. God tells us to be kind and to take care of animals.

18. Proverbs 12:10 A righteous man regardeth the life of his beast: but the tender mercies of the wicked are cruel.

20. Genesis 1:21 So God created the great creatures of the sea and every living thing with which the water teems and that moves about in it, according to their kinds, and every winged bird according to its kind. And God saw that it was good.

Previous: 25 Reasons Why The World Hates Christians And Christianity