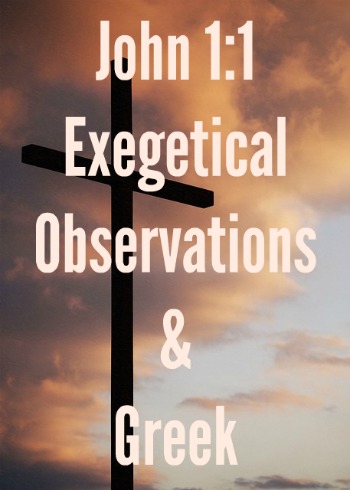 1. Here the Word (‘ho Logos’) is declared to be “in the beginning” (‘en arche’) just as God is in the opening of Genesis: the Hebrew reading (transliterated) ‘beresit…Elohim,’ being translated as “In the beginning…God”.

We know that John is intending to point us to Genesis 1 because he presents the Word (‘ho Logos’) in the exact same way as God is in the Septuagint. The Septuagint reads, “In the beginning…God” (‘en arche…ho Theos’) (Gen. 1:1) and John then says, “In the beginning was the Word” (‘en arche ēn ho Logos’). Note the striking similarity between the two, the only difference being the presence of the past tense verb “was” (‘ēn’).

Here John is clearly playing off of the Septuagint’s presentation of God and applies such to the Word. Thus, even the very first words of John’s Gospel show the deity of this Word for Scripture says this (that is, being “in the beginning”, ‘en arche’) of only one other up until this point and that one is God.

John, I believe, intends his readers to recognize that the mere fact that the Word (‘Logos’) is “in the beginning” (‘en arche’) declares, in an implicit but nonetheless powerful fashion, that “The Word was God” (‘Theos ēn ho Logos’), which He will later explicitly state lest any leave this passage without a clear understanding of His meaning, nevertheless the exegetical reality of this phrase, “In the beginning was the Word” (‘En arche ēn ho Logos’) is that such a statement necessitates the deity of the Word (‘ho Logos’).

2. Even then, if his readers, for one reason or another, would be unable to identify his blatant reference to the Septuagint rendering of Genesis 1:1 (this I find somewhat unlikely in a predominately Greek speaking world in which Jews are scattered throughout, many of which could not even read Hebrew, as well as a number of proselytized Gentiles – also with the notable fact that John’s Gospel was written towards a predominately Gentile audience), John does not merely say, “In the beginning…the Word” (‘en arche…ho Logos’) as Genesis 1 does of God but rather says, “In the beginning was the Word” (‘en arche ēn ho Logos’).

The difference between the two being important enough to note. Presumably, although not likely, a reader could’ve passed of the phrase, “In the beginning…the Word, etc.” (‘en arche…ho Logos’) as not necessitating that the Word be divine.

But notice in the latter, being what John actually wrote, the presence of the past tense verb “was” (‘ēn’), thereby telling his readers that at the beginning (which is also a possible translation of ‘ēn arche’) the Word (‘ho Logos’) already was – that is to say, the Word (‘ho Logos’) already existed at the beginning (since in Greek ‘ēn’ is a verb which can reference being/existence as much as ‘eimi’, which is often translated as “I am” or something similar). This being stated clearly; indeed, it is the first premise of John’s writing – the Logos was “in the beginning” (‘en arche’).

The only one of whom such could be truthfully said (John, being under the inspiration of the Spirit is exempt from being a liar in his writings since such fallaciousness would, by direct implication, need to be applied to the Spirit Himself – which is blasphemy to the highest degree) is God, since to already be at the beginning would, then, require the one to be eternal, to be “I AM” (‘Ego eimi’) as Christ so often said of himself (see in particular John 18:5 but do note that the Greek reads, “he said, “I AM” (‘legei autois, “ego eimi.”) – ‘he’ is not present in the Greek and thus, it ought be rendered “I am” at the least, if not “I AM”.)

3. Therefore, upon that basis, the Word (‘ho Logos’) is identified as God (‘Theos’) – “and the Word was God” (‘kai Theos ēn ho Logos’). For only God is ‘protos arche’ – that is, ‘before the beginning’. Thus, the Word (‘ho Logos’) is clearly identified as God (‘Theos’) since, if the first premise is true (namely, “In the beginning was the Word”, ‘En arche ēn ho Logos’), the Word, by consequence, must be God, as such necessarily follows from the first statement.

So then, the passage affirms that the Word (‘ho Logos’) is God and that the Word was with (in an intensely intimate fashion, which “with”, ‘pros’ points towards) God and therefore, distinct from God. Nevertheless, these two statements do not contradict each other in any way.

4. The prior observation only holds consistently with the text if we assume that the two uses of “God” (‘Theos’) in the text – “and the Word was with the God” (‘kai ho Logos ēn pros ton Theon’) and “and God” (‘kai Theos ēn ho Logos’) do not mean the exact same thing.

This I believe to be not only obvious but also necessary if we are to hold the truthfulness of the two statements. Therefore, I submit that the former (“the God”, ‘ton Theon’) refers to the person of God, namely, the Father – this hinted at by the presence of the definite article, “the” (‘ton’) – and the latter (“and God”, ‘kai Theos’) refers to the state or quality of being of God, namely, divinity or deity – this, I believe to be referenced by the lack of the definite article.

2. The Word is eternal, not created in any way but was eternally God.

4. The two usages of “God” in the text must differ in precise meaning lest the text contradict itself: the first usage must refer to the person of God, the Father, as noted by the presence of the definite article; whereas, the second usage must refer to the essence (or state or quality of being) of God, as noted by the absence of the definite article.

This text of John 1:1 while it manifestly teaches the deity of Christ also points us to the foundation of the orthodox doctrine of the Trinity. I pray that greater understanding of this text, especially its Trinitarian implications and applications, will spread in the Church and that this short article will be used by the Spirit of God to that end.

"Michael Hall is a seventeen-year old homeschooler, who will be graduating in June of 2017 and has already been accepted to Reformation Bible College in Sanford, FL and plans to enroll there in the Fall of 2017. He seeks a major in biblical studies with which he wishes to go on to seminary and, Lord willing, the pastorate ministry. His interests consist of reading theological works (his favorites are those written by the Reformers and Puritans), the discussion of theology, tea brewing, cooking, hunting, hiking/backpacking, shooting, archery, and cutlery."

Next: Who Is John Calvin?