When I was in eighth grade, someone said that I was a pessimist and I accepted that as the truth about who I was. Sure, I was and still can be a grump in the mornings, but I had never thought of myself as “a person who tends to see the worst aspect of things or believes that the worst will happen” which is the definition of a pessimist. 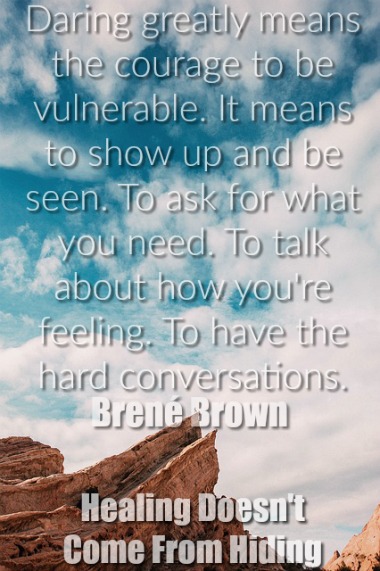 That word hadn’t been in my vocabulary before that moment, at least not for everyday or casual conversations, but from that moment forward, I saw myself as a negative person. And when I started struggling with suicidal depression later that year, I accepted that as my identity.

I would say “I am..depressed, suicidal, insecure, negative,” whatever. So instead of saying “I’m in a fight for my life against this demon or this evil spirit” I willingly hid under the weight connected to those words and took shame on as my identity. I honestly didn’t know any better, so I don’t feel guilt over it, but isn’t that heartbreaking? I wasn’t in God’s Word, and I didn’t have a relationship with Him, so I didn’t know what He thought about me and had nothing to encourage me to rise above the lies, but I knew enough to feel ashamed of myself.

The suicidal depression lasted around nine years and right before God delivered me, He gave me a mentor who could see what I was enduring. She would lovingly call me out when I tried to skirt around the truth, and she asked multiple times if I had suicidal thoughts, but I’d never open up. I was scared of judgment and appearing weak, so I’d always smile and say I was fine even though I wasn’t. When God finally did break the chains that had kept me bound for so long, she was the first person I called and she sat on the floor of my apartment and allowed me to open up. For the first time in years, I experienced vulnerability.

8 For you were once darkness, but now you are light in the Lord. Live as children of light 9 (for the fruit of the light consists in all goodness, righteousness, and truth) 10 and find out what pleases the Lord. 11 Have nothing to do with the fruitless deeds of darkness, but rather expose them. 12 It is shameful even to mention what the disobedient do in secret. 13 But everything exposed by the light becomes visible—and everything that is illuminated becomes a light. 14 This is why it is said: “Wake up, sleeper, rise from the dead, and Christ will shine on you.” 15 Be very careful, then, how you live—not as unwise but as wise,16 making the most of every opportunity, because the days are evil.

There’s a lot there, so I want to look at verse 8 “you were darkness, but now you’re light.” This verse doesn’t just say continue to walk in the light, turn away from darkness, be the light, no–it says you used to be the darkness, not just in it. This verse says you became a new source of darkness and a vessel for it, and what does darkness do? It chokes out the light. So if we were created in God’s image, and He is light, we are light bearers. And when we actively pursue or participate with something dark, like sin, it takes over and brings along shame. Have you ever heard of kudzu? It’s a plant that was brought over from Japan and has taken over in the south because it’s hard to control, but do you know why it is so bad? It spreads quickly and can adapt, meaning it will grow for miles horizontally but if a tree is in its path, it can also climb vertically. And whatever it grows over, dies. Kudzu is so thick that once it’s there, the plants under it can’t get any sunlight and they stop growing. It’s also heavy, so the weight of it alone is usually enough to kill the other plants. To me, that sounds a lot like the enemy, shame, and darkness. The devil is tricky, and like the kudzu’s growth going from horizontal to vertical, he knows how to switch things up to get to you. We all know that sin can snowball and in no time feel like it’s out of control, and like the kudzu, it invades and weighs down our soul, bringing with it darkness (shame) that smothers out the light. And then we take on that darkness as our identity, walking in shame daily. Once a tree has been covered in kudzu, you can’t tell what it used to be. Yes, due to its height I guess you can assume it was a tree but can you know what kind? Are you able to see specific characteristics to help identify it? Like the trees, our identity changes from light to dark. Is that what Christ wants for us?

I read a commentary on this passage that said: “for if the light be in you, it will naturally effloresce into all forms of beauty.” That sounds nice but what does effloresce mean? It means to blossom, bloom, or come into flower. That’s what God wants for us, to be so filled with His light that kindness, love, joy and other characteristics that are pleasing to God are just constantly blossoming in our hearts and lives.

This passage goes on to say “Have nothing to do with the fruitless deeds of darkness, but rather expose them,” and I think that ties in with James 5:16, “Therefore confess your sins to each other and pray for each other so that you may be healed. The prayer of a righteous person is powerful and effective.” Guys, there is healing in community, and there are people who have walked the road you’re on. I know, because he did this to me, that the enemy tells you-you’re the only one who has ever struggled with whatever you’re struggling with but I promise you’re not, he only wants to keep you in darkness. He wants you to operate out of a place of shame. And as you’re reading this, the devil might tell you “Okay, maybe Emily was under the influence of suicidal depression, but not like you are. It’s worse for you so she won’t understand and she’ll think less of you or judge you” Lies. Yes, it’s different for everyone, but I guarantee that if you were to message me just these two words, suicidal depression, I’d be able to relate to you. I’d also be able to speak hope into your tormented soul and mind because that’s what God and my mentor did for me.

Revelation 12:11 says “And they overcame him by the blood of the Lamb and by the word of their testimony.” We don’t go through fights against darkness just to see if we’re strong enough. I didn’t just waste nine years battling suicidal depression, or walk away empty handed. God gave me a testimony of His power from all those years that I can now share with other people who are in that same fight. The power of life and death is in the tongue so when I share my testimony from that period in my life; I’m speaking restoration over others. I’m declaring God’s power and glory over others. And the enemy knows—which is why he tried to silence me for so long. Whatever you’re going through, the devil wants to keep you quiet because if you open your mouth and heart and confess to someone, if you step into the light and operate from a place of vulnerability, you’ll receive healing and be restored. The darkness and shame will be broken off from your identity, and you’ll bloom. And once you’ve experienced restoration, you’ll be able to testify to others of God’s miraculous power, and they’ll step into the light and receive healing. Your obedience to operate from a place of vulnerability gives others permission to expose their hurts and do the same. And against the enemy’s wishes, the shame will lift, and God’s light will spread. The enemy will try to keep you quiet because healing doesn’t come from hiding.

Verse 14 says “Wake up, sleeper, rise from the dead, and Christ will shine on you.” I love this verse, especially when it comes to shame/vulnerability. This verse commands us to rise above whatever is weighing us down and says that if we do, we will be in the light of Jesus. Just like with the kudzu plant, if we’re under the influence and weight of sin and shame, we can’t receive His healing or light. We won’t grow or thrive, and the darkness and shame will become our identity.

Throughout my life, I’ve heard a lot of people say “That’s just who I am” when God’s Word says otherwise. And maybe they don’t know God’s Word, because I sure didn’t. So other than “a good person,” I didn’t know who I was called to be. But what about us, the people who are in church and living in hiding behind shame? Maybe we don’t want to put in the work that’s required to change. Because yes, God heals and restores, but we have to decide to let Him—we have to be the one to let Him in. Or maybe we’re too afraid of sorting through the pain that sometimes comes with facing the reality of who you are or what has happened in your life, so every day when we put on our shoes to leave the house, we also put on a mask because it’s “easier.” And when it starts to crack after a tough day or week or year, we frantically try to glue the pieces back together—and we just repeat that process over and over, never fully believing what He says about us, never embracing His healing, and never fully walking in His light.

Healing doesn’t come from hiding and vulnerability takes courage, but I promise you it’s worth it.

Previous: Remaining Firm In Faith And Confident In Your Identity

Next: Ways To Create Peace In Marriage