Bible verses about self defense

The regular self-defense weapon that is in homes today are guns. When owning a firearm we must be responsible. These days there are many foolish trigger-happy people who own guns who should not be able to even own a knife because they are that irresponsible. 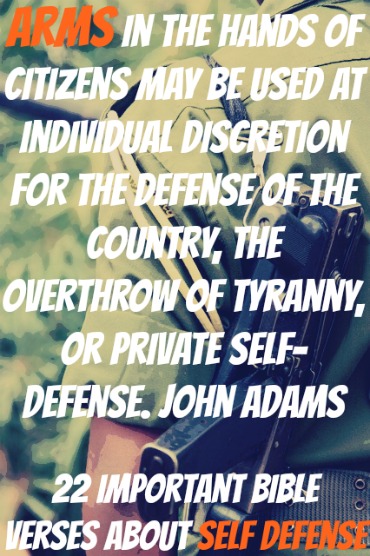 As Christians our first option should never ever be to kill someone. Here are a few scenarios. You are sleeping at night and you hear a burglar.

It’s night time, you’re scared, you grab your 357 and you shoot and kill that person.

In the dark you don’t know if that intruder is armed or if he wants to rob, hurt, or kill you. In this situation you are not guilty.

Now if it’s day time and you catch an unarmed intruder and he tries to flee out the door or he falls to the ground and says please don’t kill me and you do, in Florida and many other places that is murder or manslaughter depending on your story and the evidence at the scene.

Many people out of anger kill intruders and they lie about it. Many people are in prison for pursuing and taking the lives of intruders. Sometimes the best thing to do is get out of there and call 911. God says don’t repay evil for evil.

Let’s say someone is armed or tries to run at you and attack you, then that is a different story. You have to protect your household and you wouldn’t be guilty if anything was to happen.

You must get to know your gun laws in your state and you must handle all situations with discernment. The only time you should ever use deadly force is when you, your wife, or your child’s life is threatened. At the end of the day put your full trust in God and if you own a firearm ask for wisdom in all situations.

3. Isaiah 49:25 “Who can snatch the plunder of war from the hands of a warrior? Who can demand that a tyrant let his captives go?”

Buying Firearms or other self-defense weapons.

4. Luke 22:35-37 “Then Jesus asked them, “When I sent you out to preach the Good News and you did not have money, a traveler’s bag, or an extra pair of sandals, did you need anything?” “No,” they replied. “But now,” he said, “take your money and a traveler’s bag. And if you don’t have a sword, sell your cloak and buy one! For the time has come for this prophecy about me to be fulfilled: ‘He was counted among the rebels. Yes, everything written about me by the prophets will come true.”

5. Luke 22:38-39 “Look, Lord,” they replied, “we have two swords among us.” “That’s enough,” he said. Then, accompanied by the disciples, Jesus left the upstairs room and went as usual to the Mount of Olives.”

6. Matthew 5:38-39 “Ye have heard that it hath been said, An eye for an eye, and a tooth for a tooth: But I say unto you, That ye resist not evil: but whosoever shall smite thee on thy right cheek, turn to him the other also.”

7. Romans 12:17 “Recompense to no man evil for evil. Provide things honest in the sight of all men.”

8. 1 Peter 3:9 “Do not repay evil with evil or insult with insult. On the contrary, repay evil with blessing, because to this you were called so that you may inherit a blessing.”

12. Job 34:4 “Let us discern for ourselves what is right; let us learn together what is good.”

14. Psalm 119:66 “Teach me good judgment and knowledge, for I believe in your commandments.”

15. Matthew 12:29 “Or else how can one enter into a strong man’s house, and spoil his goods, except he first bind the strong man? and then he will spoil his house.”

You must protect yourself and your family

17. Proverbs 24:11 “Rescue captives condemned to death, and spare those staggering toward their slaughter.”

18. 1 Timothy 5:8 “But if any provide not for his own, and specially for those of his own house, he hath denied the faith, and is worse than an infidel.”

19. Romans 13:1-7 “Let every person be subject to the governing authorities. For there is no authority except by God’s appointment, and the authorities that exist have been instituted by God. So the person who resists such authority resists the ordinance of God, and those who resist will incur judgment (for rulers cause no fear for good conduct but for bad). Do you desire not to fear authority? Do good and you will receive its commendation, for it is God’s servant for your good. But if you do wrong, be in fear, for it does not bear the sword in vain. It is God’s servant to administer retribution on the wrongdoer. Therefore it is necessary to be in subjection, not only because of the wrath of the authorities but also because of your conscience. For this reason you also pay taxes, for the authorities are God’s servants devoted to governing. Pay everyone what is owed: taxes to whom taxes are due, revenue to whom revenue is due, respect to whom respect is due, honor to whom honor is due.”

20. Nehemiah 4:16-18 “From that day forward, half of my men were doing the work and half of them were taking up spears, shields, bows, and body armor. Now the officers were behind all the people of Judah who were rebuilding the wall. Those who were carrying loads did so by keeping one hand on the work and the other on their weapon. The builders to a man had their swords strapped to their sides while they were building. But the trumpeter remained with me.”

Trust in the Lord and not your weapon.

21. Psalm 44:5-7 “Only by your power can we push back our enemies; only in your name can we trample our foes. I do not trust in my bow; I do not count on my sword to save me. You are the one who gives us victory over our enemies; you disgrace those who hate us.”

22. 1 Samuel 17:47 “And everyone assembled here will know that the LORD rescues his people, but not with sword and spear. This is the LORD’s battle, and he will give you to us!”