What used to lurk amongst the websites full of various political conspiracy theories has become increasingly mainstream. Flat earth theory. But does the Bible actually support this theory? 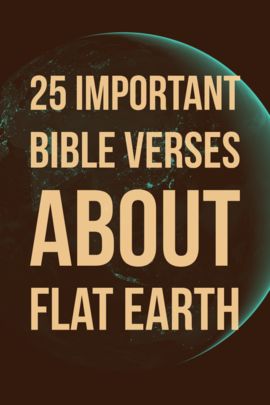 Does the Bible teach that the earth is flat?

Flat Earth Theory support has grown rapidly. This is largely due to the influence of social media. Unfortunately, many well-meaning Christians fall for this theory. These websites claim that until 500 years ago, it was largely taught that the earth was flat. However, if you look at many of the ancient scholars this claim is disproven. Geoffrey Burton Russel, a medieval scholar taught that the earth was spherical. So did Aristotle. Even Eratosthenes in the 2nd century accurately measured the circumference of the earth. These early writers held to a geocentric view, it included a spherical earth.

Two late 19th century skeptics are largely to blame for this theory. John William Draper and Andrew Dickson White. These two men held to the Conflict Thesis. They believed that due to the religion that largely dominated medieval Europe certain intellectual advancement was halted. And that it was only after man escaped his religious bindings in the Renaissance that he was able to think for himself. They claim that the church opposed Galileo’s heliocentric theory due to their blindness from their faith. However, the contention in accepting Galileo’s theory was largely due to the geocentric theories promoted by Aristotle and Claudius Ptolemy.

The Bible clearly teaches that the Earth was created before the Sun. Many flat earthers claim that “sun worship” from ancient pagan societies had made its way into science. This is simply not true. Many flat earthers promote the Big Bang. The earth is not continually expanding. It is complete.

2) Genesis 2:1 “Thus the heavens and the earth were completed in all their vast array.”

3) 2 Samuel 22:16 “The valleys of the sea were exposed and the foundations of the earth laid bare at the rebuke of the LORD, at the blast of breath from his nostrils.”

Verses that Bible critics use

Revelation 7:1 is usually the first verse that critics come to in order to prove that the Bible teaches a flat square earth. Many of these critics claim that if the writers of the Bible believed that the earth was square and flat, it would prove that the Bible is not inspired, but that it was merely myths based on the worldview of society at that time. Because if God’s Word teaches that the earth is a flat disk or square, and if the earth is actually spherical then God’s Word can’t be trusted about this issue. And if God’s Word isn’t totally and completely true about this issue – what else in it is not true? Historically, we can see a COUPLE of examples in ancient societies that believed in a flat round earth. However, NONE of these held to a square shaped earth.

The four winds in Revelation 7:1 refer to the four cardinal points: north, south, east and west. Most scholars agree that this was probably an idiom referencing every location on earth, even the most distant. The King James Version translates this as “quarters” instead of “corners.” Most idioms sound peculiar when translating them into another language. “Someone left the barn door open”, an Appalachian idiom talking about dealing with a lot of traffic on the road, would sound absurd in another language, and its usage indiscernible from the idiom itself.

Genesis 13:17; Job 38:18; Isaiah 8:8; Revelation 20:9 are also used by Flat Earth supporters. They say that these verses mean that the earth was flat enough for it to mean “breadth.” In Genesis this verse is talking about the land that God was going to give Abram. It isn’t all the land that Abram had traveled during his lifetime. Just the Land in Canaan. Length and Breath are very normal terms for describing the size of a plot of land. Flat earth supporters also say that the verse in Job is describing a wide flat earth, but it is simply where God is asking Job if he knows anything about the size of the earth, for which Job does not. Then in Isaiah it is clearly understood that the discussion is over the land of Judah, not the entire planet. Then in Revelation, its clear that “earth” refers to dry land because people can not march through the ocean.

Another verse that is used is Job 37:10, “and the breadth of the waters is straitened”

In this passage, Strait is not Straight. Strait means constrained and it can also mean a narrow passageway of water that connects two large bodies of water. The idea of the word is “close fitted” or “narrow.” We can conclude by the word frost and straight that the water here is frozen. This passage does not indicate a flat, or straight earth.

4) Revelation 7:1 “After this I saw four angels standing at the four corners of the earth, holding back the four winds of the earth to prevent any wind from blowing on the land or on the sea or on any tree.”

5) Revelation 20:7-8 “And when the thousand years are expired, Satan shall be loosed out of his prison, and shall go out to deceive the nations which are in the four corners of the earth, Gog, and Magog, to gather them together to battle: the number of whom is as the sand of the sea.”

6) Isaiah 11:12 “And he shall set up an ensign for the nations, and shall assemble the outcasts of Israel, and gather together the dispersed of Judah from the four corners of the earth.”

9) Isaiah 8:8 “And it will sweep on into Judah, it will overflow and pass on, reaching even to the neck, and its outspread wings will fill the breadth of your land, O Immanuel.”

The immovability of the earth

These passages are often sited as being able to “prove” a flat earth. These verses are all poetry and must be hermeneutically applied as such. Poetic passages are never meant to be taken literally. A fixed earth could not be destroyed by God as He has promised to do so in order to create a new one.

In Psalms we see a unique Hebrew word “kun” which means “fixed” or “established.” This word is also used in 1 and 2 Samuel when it is describing David’s kingdom. We also see it in Psalm 10:6, and Proverbs 10:30 where it says that the righteous “shall not be moved.” It doesn’t mean that the righteous are frozen to the spot. This word has an opposite: “mut” which means moveable. It is often translated “slip” or “sway.”  From understanding the Hebrew words used, we can understand that the earth is firmly established in its construction. It is very well designed. God has created laws of chemistry and biology and physics to allow the earth to function well. We know that the sun will rise and will set and that winter will eventually give way to spring and to summer. These fluctuations are still well within the realm of immoveable. We cannot take these verses literally without altering the meaning of the verses in other places where this word is used.

12) 1 Chronicles 16:30 “Tremble before him, all the earth! The world is firmly established; it cannot be moved.”

15) Proverbs 10:30 “The righteous will never be uprooted, but the wicked will not remain in the land.”

16) Psalm 96:10 “Say among the nations, “The Lord reigns.” The world is firmly established, it cannot be moved; he will judge the peoples with equity.”

17) Psalm 104:5-6 “He set the earth on its foundations; it can never be moved. 6 You covered it with the watery depths as with a garment; the waters stood above the mountains.”

18) Isaiah 45:18 “For this is what the Lord says—he who created the heavens, he is God; he who fashioned and made the earth, he founded it; he did not create it to be empty, but formed it to be inhabited— he says: “I am the Lord, and there is no other.”

The ends of the earth

It’s impossible for a tree to grow so tall that it can be seen by the whole earth. These verses in Daniel 4 are describing a dream that King Nebuchanezzar had, not reality.  And we can see later in Daniel that the fulfillment of the dream had absolutely nothing to do with a tree. The tree was never mean to be taken literally.

19) Daniel 4:11 “The tree grew and became strong, and its top reached to heaven, and it was visible to the end of the whole earth.”

20) Daniel 4:20 “The tree you saw, which grew large and strong, with its top touching the sky, visible to the whole earth.”

21) Deuteronomy 28:49 “The Lord will bring a nation against you from far away from the ends of the earth, like an eagle swooping down, a nation whose language you will not understand.”

22) Deuteronomy 28:64 “The Lord will scatter you among all nations, from one end of the earth to the other. There you will worship other gods – gods of wood and stone, which neither you nor your ancestors have known.”

23) Psalm 59:13 “Consume them in your wrath, consume them till they are no more. Then it will be known to the ends of the earth that God rules over Jacob.”

24) Jeremiah 25:33 “For twenty-three ears – from the thirteenth year of Josiah son of Amon king of Judah until this very day – the word of the Lord has come to me and I have spoken to you again and again, but you have not listened.”

25) Jeremiah 25:31 “The tumult will resound to the ends of the earth, for the Lord will bring charges against the nations; he will bring judgement on all mankind and puts the wicked to the sword,’ declares the Lord.”

There is nothing in real science that contradicts Scripture. The Word of God does not teach a flat earth, nor has any historically reputable Christian scholar in the past 2,000 years.

Next: The Character Of A Christian – An Exposition Of Psalm 1:1-2