Bible verses about being deceived

Scripture repeatedly tells us to watch out for people who may try to deceive us, but sadly many people overlook the warning. If there has ever been a time to be on guard it would be now. More and more wolves are popping up and deceiving many. Shield yourself with the Word of God so you don’t become a victim. Meditate on the Bible daily. Anything that is hindering your growth in Christ remove it from your life. 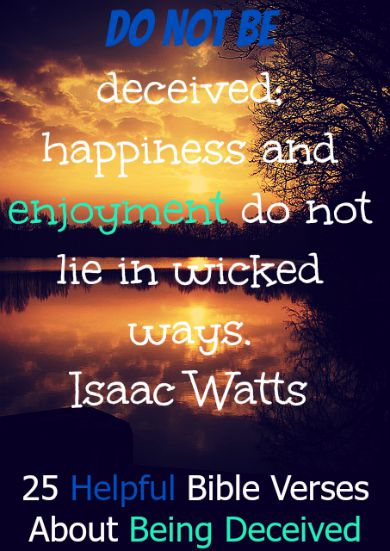 Pray constantly and allow the Holy Spirit to guide your life. Listen to the convictions of the Spirit. Satan will do all he can to deceive us just like he deceived Eve.

He will say, “don’t worry God doesn’t care. The Bible doesn’t specifically say you can’t do that.” We must align our lives with God’s will. I encourage you to watch out for self-deception.

On the Day of Judgement you can’t use “I was deceived” as an excuse because God is not mocked. Never put your trust in man, but instead put your full trust in the Lord.

1. Romans 16:18 for such people do not serve our Lord Christ but their own appetites. They deceive the hearts of the unsuspecting with smooth talk and flattering words.

2. Hebrews 13:9 Stop being carried away by all kinds of unusual teachings, for it is good that the heart be strengthened by grace, not by food laws that have never helped those who follow them.

3. Ephesians 5:6 Don’t let anyone deceive you with meaningless words. It is because of sins like these that God’s anger comes to those who refuse to obey him.

4. 2 Thessalonians 2:3 Don’t let anyone deceive you about this in any way. That day cannot come unless a revolt takes place first, and the man of sin, the man of destruction, is revealed.

5. Colossians 2:8 Be careful that no one takes you captive through philosophy and empty deceit based on human tradition, based on the elemental forces of the world, and not based on Christ.

6. 2 Timothy 3:13-14 But evil people and impostors will go from bad to worse as they deceive others and are themselves deceived. But as for you, continue in what you have learned and found to be true, because you know from whom you learned it.

In the last days there will be many.

8. Matthew 24:24 For false messiahs and false prophets will appear and perform great signs and wonders to deceive, if possible, even the elect.

Deceiving yourself into thinking your bad friends won’t lead you astray.

Being deceived by worthless things such as idols and riches.

10. Job 15:31 Let him not deceive himself by trusting what is worthless, for he will get nothing in return.

11. Deuteronomy 11:16 Be careful, or you will be enticed to turn away and worship other gods and bow down to them.

12. Matthew 13:22 The seed planted among thornbushes is another person who] hears the word. But the worries of life and the deceitful pleasures of riches choke the word so that it can’t produce anything.

Being deceived by thinking you don’t sin.

13. 1 John 1:8 If we say that we do not have any sin, we are deceiving ourselves and we’re not being truthful to ourselves.

Being deceived by sin, which causes you to live in rebellion.

14. Obadiah 1:3 You have been deceived by your own pride because you live in a rock fortress and make your home high in the mountains. ‘Who can ever reach us way up here?’ you ask boastfully.

15. Galatians 6:7 Do not be deceived: God is not mocked, for whatever one sows, that will he also reap.

16. 1 Corinthians 6:9-11 Don’t you know that the unrighteous will not inherit God’s kingdom? Do not be deceived: No sexually immoral people, idolaters, adulterers, or anyone practicing homosexuality, no thieves, greedy people, drunkards, verbally abusive people, or swindlers will inherit God’s kingdom. And some of you used to be like this. But you were washed, you were sanctified, you were justified in the name of the Lord Jesus Christ and by the Spirit of our God.

18. Proverbs 20:1 Wine is a mocker, strong drink a brawler, And whoever is intoxicated by it is not wise.

Satan is a deceiver.

19. 2 Corinthians 11:3 But I fear that somehow your pure and undivided devotion to Christ will be corrupted, just as Eve was deceived by the cunning ways of the serpent.

21. 2 Thessalonians 2:10-11 and with every unrighteous deception among those who are perishing. They perish because they did not accept the love of the truth in order to be saved. For this reason God sends them a strong delusion so that they will believe what is false.

22. Titus 3:3-6 At one time we too were foolish, disobedient, deceived and enslaved by all kinds of passions and pleasures. We lived in malice and envy, being hated and hating one another. But when the kindness and love of God our Savior appeared, he saved us, not because of righteous things we had done, but because of his mercy. He saved us through the washing of rebirth and renewal by the Holy Spirit, whom he poured out on us generously through Jesus Christ our Savior.

23. James 1:22 But be doers of the word and not hearers only, deceiving yourselves.

24. Isaiah 19:13 The officials of Zoan have become fools, the leaders of Memphis are deceived; the cornerstones of her peoples have led Egypt astray. The LORD has poured into them a spirit of dizziness; they make Egypt stagger in all that she does, as a drunkard staggers around in his vomit.

25. 1 Timothy 2:14 Adam wasn’t deceived, but the woman, being deceived, has fallen into disobedience.