Does Satan Have A Son?

Many people wonder does Satan have children? Nowhere in Scripture does it say that Satan had a daughter or son. On the other hand, spiritually speaking when a person has repented and put their trust in Christ alone for salvation they become children of God. If someone has not put their faith in Jesus Christ they are children of Satan and they stand condemned. If your father is not God, then Satan is your father. 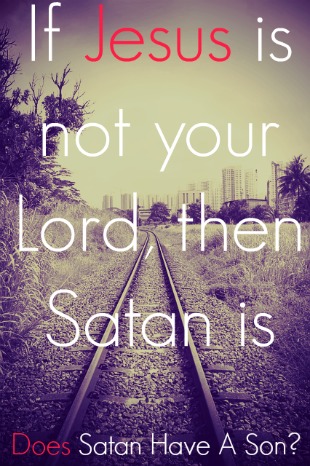 “If Jesus is not your Lord, then Satan is. God doesn’t send His children to Hell either.”

“Hell is the highest reward that the devil can offer you for being a servant of his.”

“As Christ has a Gospel, Satan has a gospel too; the latter being a clever counterfeit of the former. So closely does the gospel of Satan resemble that which it parades, multitudes of the unsaved are deceived by it.” A.W. Pink

The Antichrist is Satan’s son.

2 Thessalonians 2:3 “Don’t let anyone deceive you in any way. For that day will not come unless the apostasy comes first and the man of lawlessness is revealed, the son of destruction.”

Revelation 20:10 “Then the devil, who had deceived them, was thrown into the fiery lake of burning sulfur, joining the beast and the false prophet. There they will be tormented day and night forever and ever.”

John 8:44-45 “Ye are of your father the devil, and the lusts of your father ye will do. He was a murderer from the beginning, and abode not in the truth, because there is no truth in him. When he speaketh a lie, he speaketh of his own: for he is a liar, and the father of it. And because I tell you the truth, ye believe me not.”

John 8:41 “You are doing the works of your own father.” “We are not illegitimate children,” they protested. “The only Father we have is God himself.”

Acts 13:10 “You are a child of the devil and an enemy of everything that is right! You are full of all kinds of deceit and trickery. Will you never stop perverting the right ways of the Lord?”

Satan is deceiving his children.

2 Corinthians 4:4 “In whom the god of this world hath blinded the minds of them which believe not, lest the light of the glorious gospel of Christ, who is the image of God, should shine unto them.”

Revelation 12:9-12 “This great dragon—the ancient serpent called the devil, or Satan, the one deceiving the whole world—was thrown down to the earth with all his angels. Then I heard a loud voice shouting across the heavens, “It has come at last— salvation and power and the Kingdom of our God, and the authority of his Christ. For the accuser of our brothers and sisters has been thrown down to earth— the one who accuses them before our God day and night. And they have defeated him by the blood of the Lamb and by their testimony. And they did not love their lives so much that they were afraid to die. Therefore, rejoice, O heavens! And you who live in the heavens, rejoice! But terror will come on the earth and the sea, for the devil has come down to you in great anger, knowing that he has little time.”

Was Cain the son of the devil? Not in the physical sense, but the spiritual sense.

Next: Bible Verses About Christmas